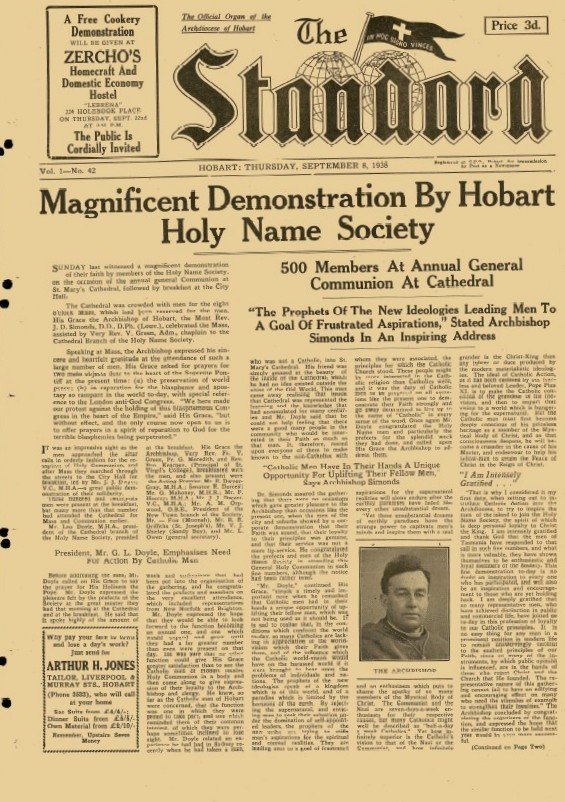 “The Prophets Of The New Ideologies Leading Men To A Goal Of Frustrated Aspirations,” Stated Archbishop Simonds In An Inspiring Address

SUNDAY last witnessed a magnificent demonstration of their faith by members of the Holy Name Society, on the occasion of the annual general Communion at St. Mary’s Cathedral, followed by breakfast at the City Hall.

The Cathedral was crowded with men for the eight o’clock Mass, which had been reserved for the men. His Grace the Archbishop of Hobart, the Most Rev. J. D. Simonds, D.D., D.Ph. (Louv.), celebrated the Mass, assisted by Very Rev. V. Green, Adm., chaplain to the Cathedral Branch of the Holy Name Society.

Speaking at Mass, the Archbishop expressed his sincere and heartfelt gratitude at the attendance of such a large number of men. His Grace asked for prayers for two main objects dear to the heart of the Supreme Pontiff at the present time: (a) the preservation of world peace; (b) in reparation for the blasphemy and apostasy so rampant in the world to-day, with special reference to the London anti-God Congress. “We here made our protest against the holding of this blasphemous Congress in the heart of the Empire,” said His Grace, “but without effect, and the only course now open to us is to offer prayers in a spirit of reparation to God for the terrible blasphemies being perpetrated.”

IT was an impressive sight as the men approached the altar rails in orderly fashion for the reception of Holy Communion, and after Mass they marched through the streets to the City Hall for breakfast, led by Mr. J. J. Dwyer, V.C., M.H.A.—a great public demonstration of their solidarity.

Three hundred and twenty-six men were present at the breakfast, but many more than that number had attended the Cathedral for Mass and Communion earlier.

Before addressing the men, Mr. Doyle called on His Grtace to say the prayer for His Holiness the Pope. Mr. Doyle expressed the pleasure felt by the prefects of the Society at the great muster they had that morning at the Cathedral and at the breakfast. He said that it spoke highly of the amount of work and enthusiasm that had been put into the organisation of the gathering, and he congratulated the prefects and members on the very excellent attendance, which included representatives from New Norfolk and Brighton.

Mr. Doyle expressed the hope that they would be able to look forward to the function becoming an annual one, and one which would expand and grow until they had a far greater number than even were present on that day. He was sure that no other function could give His Grace greater satisfaction than to see the Catholic men of Hobart receive Holy Communion in a body and then come along to give expression of their loyalty to the Archbishop and clergy. He knew, so far as the Catholic men of Hobart were concerned, that the function was one in which they were proud to take part, and one which reminded them of their common interest, of which they were perhaps sometimes inclined to lose sight. Mr. Doyle related an experience he had had in Sydney recently when he had taken a man, who was not a Catholic, into St. Mary’s Cathedral. His friend was simply amazed at the beauty of the inside of the Cathedral, which he had no idea existed outside the cities of the Old World. This man came away realising that inside that Cathedral was represented the learning and the knowledge that had accumulated for many centuries and Mr. Doyle said that he could not help feeling that there were a good many people in the community who would be interested in their Faith as much as that man. It, therefore, rested upon everyone of them to make known to the non-Catholics with whom they were associated, the principles for which the Catholic Church stood. These people might be more interested in the Catholic religion than Catholics were, and it was the duty of Catholic men to be prepared on all occasions like the present one to demonstrate their Faith strongly and go away determined to live up to the name of “Catholic” in every sense of the word. Once again Mr. Doyle congratulated the Holy Name men and particularly the prefects for the splendid work they had done, and called upon His Grace the Archbishop to address them.

“Catholic Men Have In Their Hands A Unique Opportunity For Uplifting Their Fellow Men,” Says Archbishop Simonds

Dr. Simonds assured the gathering that there were no occasions which gave greater pleasure to the Archbishop than occasions like the present one, when the men of the city and suburbs showed by a corporate demonstration that their Faith was sound, that their loyalty to their principles was genuine, and that their service was not a mere lip-service. He congratulated the prefects and men of the Holy Name Society in attending this General Holy Communion in such fine numbers, although the notice had been rather brief.

“Mr. Doyle,” continued His Grace, “struck a timely and important note when he remarked that Catholic men had in their hands a unique opportunity of uplifting their fellow men, which was not being used as it should be. I? is sad to realise that, in the conditions which confront the world to-day, so many Catholics are lacking in appreciation of the world-vision which their Faith gives them, and of the influence which the Catholic world-vision would have on the harassed world if it were brought to bear upon the problems of individuals and nations. The prophets of the new ideologies speak of a kingdom which is of this world, and of a paradise which is limited by the horizons of the earth. By rejecting the supernatural, and enticing men to seek their salvation under the domination of self-appointed leaders, the prophets of the new order are trying to stifle man’s aspirations for the spiritual and eternal realities. They are leading men to a goal of frustrated aspirations for the supernatural realities will alone endure after the earthly paradises have faded like every other unsubstantial dream.

“Yet these unsubstantial dreams of earthly paradises have the strange power to captivate men’s minds and inspire them with a zeal and an enthusiasm which puts to shame the apathy of so many members of the Mystical Body of Christ. The Communist and the Nazi are seven-days-a-week enthusiasts for their respective causes, but many Catholics might well be described as “half-a-day a week Catholics.” Yet how infinitely superior is the Catholic’s vision to that of the Nazi or the Communist, and how infinitely grander is the Christ-King than any fuhrer or duce produced by the modern materialistic ideologies. The ideal of Catholic Action, as it has been outlined by our fearless and beloved Leader, Pope Pius XI, is to make the Catholic conscious of the grandeur of his life-vision, and then to impart that vision to a world which is hungering for the supernatural. But the 1 Catholic man must first become deeply conscious of his priceless heritage as a member of the Mystical Body of Christ, and as that consciousness deepens, he will become a crusader in the cause of his Master, and endeavour to help his fellow-men to attain the Peace of Christ in the Reign of Christ.

“I Am Intensely Gratified . .

“That is why I considered it my first duty, when setting out to introduce Catholic Action into the Archdiocese, to try to inspire the men of the island to join the Holy Name Society, the spirit of which is deep personal loyalty to Christ the King. I am intensely gratified and thank God that the men of Tasmania have responded to that call in such fine numbers, and what is more valuable, they have shown themselves to be enthusiastic and loyal members of the Society. This fine demonstration to-day is no doubt an inspiration to every one who has participated, and will also be an inspiration and encouragement to those who are yet holding back. I am deeply gratified that so many representative men, who have achieved distinction in public and commercial life, have joined us to-day in this profession of loyalty to our Catholic principles. It is no easy thing for any man in a prominent position in modern life to remain unswervingly faithful to the exalted principles of our Faith, since so many of the instruments, by which public opinion is influenced, are in the hands of those who reject Christ and the Church that He founded. The representative na.ture of this gathering cannot fail to have an edifying and encouraging effect on many who need the stimulus of examplfe to strengthen their loyalties.” The Archbishop concluded by congratulating the organisers of the function, and expressed the hope that the similar function to be held next year would be even more successful.

“It Is More Important To Me That I Am Wearing The Holy Name Badge Than That I Am Acting Premier, State Treasurer And Minister For Transport,” Says The Hon. E. Dwyer-Gray.

The Acting-Premier (Mr. E. Dwyer-Gray) said: “I have often stated publicly that I am proud of being a Catholic and I was never more proud of being a Catholic than I am this morning. It must be a source of great satisfaction and gratification to His Grace the Archbishop to witness such a demonstration that the Catholic Faith is a living force in our midst. Looking at the great gathering in this hall, I am sure that there is no man here to-day who is not happy in his heart, and who does not feel that if he dropped dead on his way home his soul would be saved. I have never made any secret of my real attachment to the Catholic Faith. As a public man I have not lost anything through that open acknowledgment, but, on the contrary, gained the respect of the community, and the esteem of the sincere, no matter what their beliefs. It is, no doubt, an interesting and important thing to be Acting-Premier of Tasmania, Treasurer of the State and Minister for Transport, and to discharge the duties of those offices together with a few other functions, that is so far as any of the merely temporary affairs of humanity can be said to be interesting and important. But it might be a great deal more important to me, through endless ages, that I am wearing in the lapel of my coat the badge of the Holy Name Society, provided that I try to live up to all that that small symbol means. For quite obviously, if there is another world, what Christ said, in these respects, is very literally true. In other words what would a man gain if he became King of the world and lost his soul? I say these things to you, because they are in my heart, and also because they may serve as a source of inspiration and edification, not only to the general community, but also strengthen and encourage others occupying a more humble position in the community than I happen