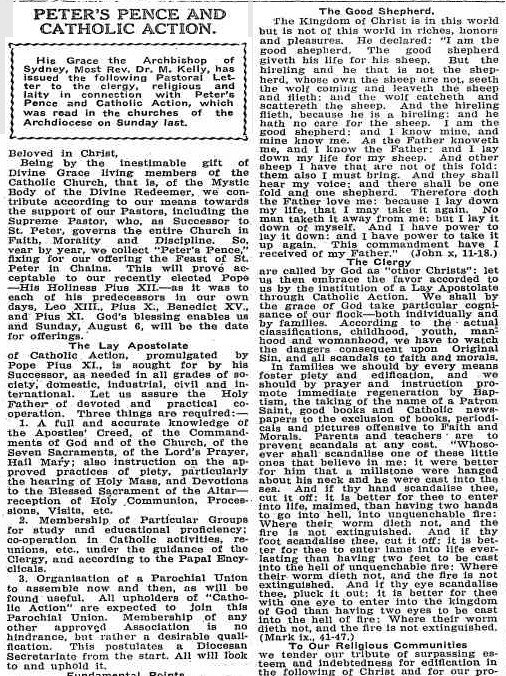 His Grace the Archbishop of Sydney, Most Rev. Dr. M. Kelly, has issued the following Pastoral Letter to the clergy, religious and laity in connection with Peter’s Pence and Catholic Action, which was read in the churches of the Archdiocese on Sunday last.

Being by the inestimable gift of Divine Grace living members of the Catholic Church, that is, of the Mystic Body of the Divine Redeemer, we contribute according to our means towards the support of our Pastors, including the Supreme Pastor, who, as Successor to St. Peter, governs the entire Church in Faith, Morality and Discipline. So, year by year, we collect ‘Peter’s Pence,’ fixing for our offering the Feast of St. Peter in Chains. This will prove acceptable to our recently elected Pope — His Holiness Pius XII. — as it was to each of his predecessors in our own days, Leo XIII., Pius X., Benedict XV., and Pius XI. God’s blessing enables us and Sunday, August 6, will be the date for offerings.

The Lay Apostolate of Catholic Action, promulgated by Pope Pius XI., is sought for by his Successor, as needed in all grades of society domestic, industrial, civil and international. Let us assure the Holy Father of devoted and practical co-operation. Three things are required: —

1. A full and accurate knowledge of the Apostles’ Creed, of the Commandments of God and of the Church, of the Seven Sacraments, of the Lord’s Prayer, Hail Mary; also instruction on the approved practices of piety, particularly the hearing of Holy Mass, and Devotions to the Blessed Sacrament of the Altar — reception of Holy Communion, Processions, Visits, etc.

2. Membership of Particular Groups for study and educational proficiency; co-operation in Catholic activities, reunions, etc., under the guidance of the Clergy, and according to the Papal Encyclicals.

3. Organisation of a Parochial Union to assemble now and then, as will be found useful. All upholders of ‘Catholic Action’ are expected to join this Parochial Union. Membership of any other approved Association is no hindrance, but rather a desirable qualification. This postulates a Diocesan Secretariate from the start. All will look to and uphold it.

To the studious we recommend as fundamental doctrine the Syllabus of Condemned Propositions issued by Pope Pius IX. Therein Rationalistic errors, Secular State Supremacy, etc., are clearly defined and repudiated. Pope Leo XIII. and each succeeding Pope manifested conspicuously that the divinely predicted ‘light of the world and salt of the earth’ (Matt. v. 13:14) ever enhances the Chair of Peter in its teaching upon religious belief, upon Gospel morality and upon Ecclesiastical discipline. In the first century the Apostle of the Gentiles instructed Titus in the following terms: ‘For the grace of God our Saviour hath appeared to all men: Instructing us, that, denying ungodliness and worldly desires, we should live soberly and justly and godly in this world. Looking for the blessed hope and coming of the glory of the great God and our Saviour Jesus Christ. Who gave himself for us, that he might redeem us from all iniquity and might cleanse to himself a people acceptable, a pursuer of good works. These things speak and exhort and rebuke with all authority. Let no man despise thee.’ So Pope Pius XI., in his first Encyclical, sets forth as a primary consideration to procure the Peace of Christ we must establish the Reign of Christ.

The Reign of Christ will be understood best by His parables and public teaching. In the Sermon on the Mount we read: ‘No man can serve two masters. For either he will hate the one and love the other; or he will sustain the one and despise the other. You cannot serve God and mammon. Therefore I say to you, be not solicitous for your life, what you shall eat, nor for your body, what you shall put on. Is not the life more than the meat and the body more than the raiment? Behold the birds of the air, for they neither sow, nor do they reap nor gather into barns: and your heavenly Father feedeth them. Are not you of much more value than they? And which of you by taking thought can add to his stature one cubit? And for raiment, why are you solicitous? Consider the lilies of the field, how they grow: they labor not, neither do they spin. But I say to you that not even Solomon in all his glory was arrayed as one of those. And If the grass of the fleld, which is to-day and to-morrow is cast into the oven, God doth so clothe: how much more you, O ye of little faith? Be not solicitous therefore, saying. What shall we eat: or, What shall we drink, or Wherewith shall we be clothed? For after all those things do the heathens seek. For your Father knoweth that you have need of all those things. Seek ye therefore first the kingdom of God and his justice: and all these things shall be added unto you.’ (Matt. vi. 24-33.)

The Kingdom of Christ is in this world but is not of this world in riches, honors and pleasures. He declared: ‘I am the good shepherd. The good shepherd giveth his life for his sheep. But the hireling and he that is not the shepherd, whose own the sheep are not, seeth the wolf coming and leaveth the sheep and flieth: and the wolf catcheth and scattereth the sheep. And the hireling flieth, because he is a hireling: and he hath no care for the sheep. I am the good shepherd: and I know mine, and mine know me. As the Father knoweth me, and I know the Father: and I lay down my life for my sheep. And other sheep I have that are not of this fold: them also I must bring. And they shall hear my voice: and there shall be one fold and one shepherd. Therefore doth the Father love me: because I lay down my life, that I may take it again. No man taketh it away from me: but I lay it down of myself. And I have power to lay it down: and I have power to take it up again. This commandment have I received of my Father.’ (John x, 11-18.)

To Our Religious Communities we tender our tribute of surpassing esteem and indebtedness for edification in the following of Christ and for our provision of Catholic schools. To them the greatest share of blessings is promised: ‘Amen, I say to you that you, who have followed me, in the regeneration when the Son of man shall sit on the seat of his majesty, you also shall sit on twelve seats judging the twelve tribes of Israel. And every one that hath left house or brethren or sisters or father or mother or wife or children or lands, for my name’s sake, shall receive an hundredfold and shall possess life ever lasting.’ (Matt. xix. 28-29.)

Self-Denial of inordinate affections for riches, pleasures and honors; also privations and sufferings are to be patiently accepted in the performance of duty as wisely chosen instead of self-indulgence, because the Cross of Christ Himself will be thus shared in, and the peace of Christ secured to mind and heart even in ‘this valley of tears.’ By the Cross and by it alone, borne in the cause of holiness and in union with the Divine Saviour and all the Saints can the children of Adam regain the happiness of Heaven. In the cause of Catholic Action let us one and all devotedly hear the call of One True Church.

P.S.: This letter is to be read on Sunday, 30th of July. The Peter’s Pence offerings are to be collected on Sunday, 6th of August, and sent to St. Mary’s Cathedral Vicariate at once for transmission to Rome. t M., Abp. Syd. 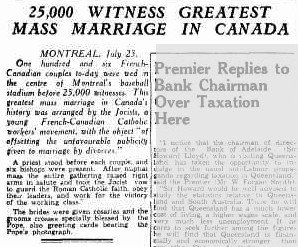 One hundred and six French-Canadian couples to-day were’ wed in the centre of Montreal’s baseball stadium before 25,000 witnesses. This greatest mass marriage in Canada’s history was arranged by the Jocists, a young French-Canadian Catholic workers’ movement, with the object “of offsetting the unfavourable publicity given to marriage by divorces.”

A priest stood before each couple, and six bishops were present. After nuptial mass the entire gathering raised right arms in salute and took the Jocist vow to guard the Roman Catholic faith, obey their leaders, and work for the victory of the working class.” The brides were given rosaries and the f rooms crosses specially blessed by the pope, also greeting cards bearing the Pope’s photograph.