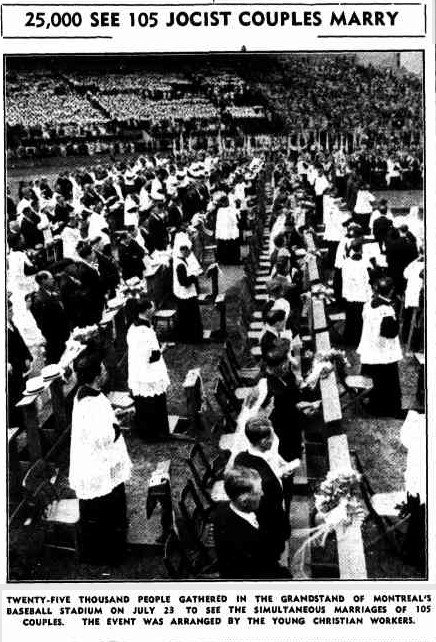 TWENTY-FIVE THOUSAND PEOPLE GATHERED IN THE GRANDSTAND OF MONTREAL’S BASEBALL STADIUM ON JULY 23 TO SEE THE SIMULTANEOUS MARRIAGES OF 105 COUPLES. THE EVENT WAS ARRANGED BY THE YOUNG CHRISTIAN WORKERS.

The first diocesan congress of the Young Christian Worker Movement of America has just been held in Oklahoma City. Eighty group leaders attended.

In greeting the Y.C.W. members taking part in the Congress, the Bishop of Oklahoma, Mgr. Francis C. Kelley, said:

“Yours is not a movement that can be organised by bringing a lot of people together or by having a large dinner. It is a movement that has to grow slowly and pass from one to another. It is the greatest thing that dould possibly be done for the Church in America.”

Besides the Y.C.W. group in Oklahoma, there are groups in Chicago and New York.

One reason why the Y.C.W. movement has not hitherto taken root in U.S.A. is because much of the ground covered by Jocistes in Europe has already been covered in America by Catholic Youth Organisations. C.Y.O., in contrast with the Young Christian Worker Movement, was started from the top, by the express direction of Ordinaries, who appointed priests and lay people to set about creating an organisation for Catholic Youth.

At their beginning C.Y.O. devoted most attention to providing recreation for young Catholics, particularly those living in depressed city areas. Later, though, many of the C.Y.O. groups have branched out into the field of study clubs, theatres and Catholic Action proper.