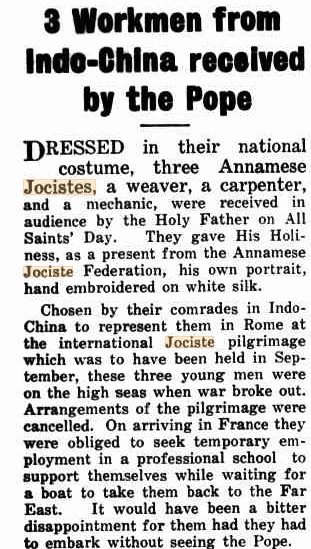 DRESSED in their national costume, three Annamese Jocistes, a weaver, a carpenter, and a mechanic, were received in audience by the Holy Father on All Saints’ Day. They gave His Holiness, as a present from the Annamese Jociste Federation, his own portrait, hand embroidered on white silk.

Chosen by their comrades in IndoChina to represent them in Rome at the international Jociste pilgrimage which was to have been held in September, these three young men were on the high seas when war broke out. Arrangements of the pilgrimage were cancelled. On arriving in France they were obliged to seek temporary employment in a professional school to support themselves while waiting for a boat to take them back to the Far East. It would have been a bitter disappointment for them had they had to embark without seeing the Pope.

They were accompanied to the Vatican by Father Raynaud, of the Paris Foreign Mission Society, former missionary at Nam-Dinh, French Indo-China, and founder there of the Catholic young men’s organisations, out of which, under the guidance of his successor, Father Vacquier, the Annamese Jociste movement grew. The movement has already made considerable headway, and is full of bright promise for the future. Its main centres of activity are at Hanoi, Haiphong, Phat-Diem, and particularly Nam-Dinh, an industrial centre, where.over 10,000 workmen are employed in the cotton mills. A parallel organisation of young Christian agricultural laborers is being founded in several country districts, while the first steps have already been taken to build up similar groups of young working class women.

As elsewhere, the Annamese Jocistes are determined “to make their brothers Christians.” They have already brought several young workmen into the Catholic fold.