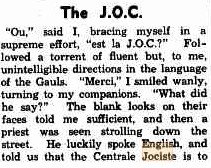 The J.O.C. “Ou,” said I, bracing myself in a supreme effort, “est la J.O.C.?” Followed a torrent of fluent but, to me, unintelligible directions in the language of the Gauls. “Merci,” I smiled wanly, turning to my companions. “What did he say?” The blank looks on their faces told me sufficient, and then a priest was seen strolling down the street. He luckily spoke English, and told us that the Centrale Jociste is to be found on the Boulevarde Poincare, near the Gare du Midi.

After an almost complete tour of Brussels, we alighted from “Gloria,” our Austin 7, and entered the magnificent five-storey Centrale. At our request an English-speaking Jociste was brought. He explained that there were several English, Australian and New Zealand priests and laymen staying there, and, “voila,” there they were. There was time for a hasty introduction, and we were whisked off to an open-air address on the other side of the city, and in the tram we learned that J.O.C. was telling Brussels, Belgium and Europe that in a few days their 20,000 pilgrims would enter the city of Rome. (Unfortunately, this was not to be, owing to the outbreak of the present war.) Arriving there, we saw a platform, amplifiers and a fringe of cyclists in the white shirt and red tie of the J.O.C., in a crowded square of the poorer quarter of the town. Followed vigorous addresses and songs in which everybody joined in both French and Flemish. Immediately it was over we were told to hasten back and eat. The cafe was completely staffed by members of the women’s organisation—the J.O.C.F., and was crowded by happy, hungry young people.

Afterwards a drink and talk in the Brasserie, and then, tired out, to our bed in a plain, clean cubicle on an upper floor. Arising at 6 o’clock, we attended one of the several Masses going on in the chapel; then breakfast in the cafe, and a few minutes to collect literature and periodicals. The morning was spent at lectures and meetings of militants having to do with the pilgrimage, at which flattering reference was made to “Les travailleurs Australiennes”; then off in “Gloria” to the new retreat house, about twelve miles out in the country.

We found the site, farm and woodland, with a cool brook to drink from, in the heat of the beautiful summer’s day. At the most elevated spot we found in the last stages of completion a large, three-storey retreat house, built of concrete and glass in the modernistic style. It consisted of some forty rooms, fitted with hot and cold water and the necessary comfort installations. On the ground floor was the chapel, dining hall, recreation rooms and kitchen, below the furnace room.

I cannot dwell on the delightful day or on the beer, so back to Brussels and Centrale with its murmurings of European unrest. On this account a hasty decision was made and “Gloria” proceeded on her way. It is sufficient for your information to state our own enquiry, “Ou est la route a Anvers?”