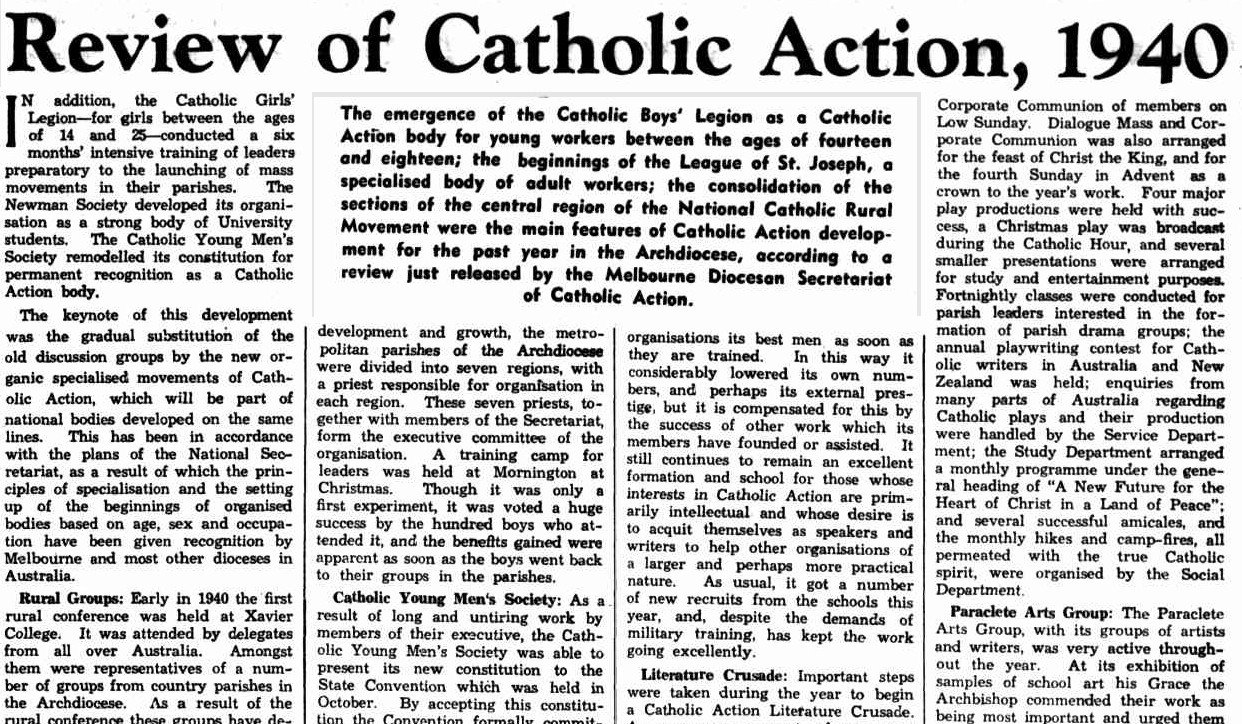 The emergence of the Catholic Boys’ Legion as a Catholic Action body for young workers between the ages of fourteen and eighteen; the beginnings of the League of St. Joseph, a specialised body of adult workers; the consolidation of Hie sections of the central region of the National Catholic Rural Movement were the main features of Catholic Action development for the past year in the Archdiocese, according to a review just released by the Melbourne Diocesan Secretariat of Catholic Action.

IN addition, the Catholic Girls’ Legion—for girls between the ages of 14 and 25—conducted a six months’ intensive training of leaders preparatory to the launching of mass movements in their parishes. The Newman Society developed its organisation as a strong body of University students. The Catholic Young Men’s Society remodelled its constitution for permanent recognition as a Catholic Action body.

The keynote of this development was the gradual substitution of the old discussion groups by the new organic specialised movements of Catholic Action, which will be part of national bodies developed on the same lines. This has been in accordance with the plans of the National Secretariat, as a result of which the principles of specialisation and the setting up of the beginnings of organised bodies based on age, sex and occupation have been given recognition by Melbourne and most other dioceses in Australia.

Rural Groups: Early in 1940 the first rural conference was held at Xavier College: It was attended by delegates from all over Australia. Amongst them were representatives of a number of groups from country parishes in the Archdiocese. As a result of the rural conference these groups have developed into vigorous leaders’ groups, which, with their sections, constitute the central region of the National Catholic Rural Movement.

The League of St Joseph: As a result of the interest aroused during the Social Justice Week, plans were prepared and a Handbook issued for an adult workers’ movement, to be called the League of St. Joseph. It was: started quietly in only a few parishes. No spectacular success has been achieved yet, but a few groups are in existence, and others will be starting shortly. By the end of 1941 the League of St. Joseph should be well established in Melbourne.

The Catholic Boys’ Legion: In October his Grace the Archbishop decided that the Catholic Boys’ Legion should be extended and developed as the only Catholic Action organisation for working lads between the ages of 14 and 18. In order to facilitate this development and growth, the metropolitan parishes of the Archdiocese were divided into seven regions, with a priest responsible for organisation in each region. These seven priests, together with members of the Secretariat, form the executive committee of the organisation. A training camp for leaders was held at Mornington at Christmas. Though it was only a first experiment, it was voted a huge success by the hundred boys who attended it, and the benefits gained were apparent as soon as the boys went back to their groups in the parishes.

Catholic Girls’ Legion: Early in the year the Catholic Girls’ Legion had consisted of a series of about twenty discussion groups. The first thing that was done was to weld them together in a movement giving them a sense of unity and co-operation; then with the assistance of the Grail and the Secretariat they worked out a plan whereby the groups would abandon the old discussion programmes and begin to train themselves for the work of organising mass movements in their parishes which would attract and hold girls of their age. The course of intensive training included classes in dressmaking, dramatic art, community singing, folk dancing and leadership. Towards the end of the year the Catholic Girls’ Legion and the Catholic Girls’ Movement arranged an amalgamation on very satisfactory terms, so that the combined movement now has nearly thirty groups. They are looking for a new and more attractive name for the new combination.

University Groups: The Newman Society showed its desire to become a Catholic Action body in no uncertain fashion and made considerable progress during the year. An energetic committee quickly arranged for the formation of ten discussion groups of students and these meet regularly throughout the middle of the year. Several combined functions were held, which were excellently attended, and numbers of lunch-hour talks attracted large audiences to the University. This is only a beginning, and 1941 promises to be a much more fruitful year at the University.

Schools Movement: The schools have always been regarded as the place where the proper foundation and formation for Catholic Action must be given, if ultimate success is to be achieved. This year, owing to the cordial co-operation of the Principals of the schools, it was possible to set up many groups in the boys’ and girls’ secondary schools and colleges. Since July, each schools group has sent in its own leaders to the Diocesan Secretariat at regular intervals for training. and for arranging co-operative effort. It has been possible to prepare more attractive and practical programmes of study, and these have been followed carefully with excellent results. Perhaps the highlights of the schools’ year were the day for the girl leaders at “Tay Creggan,” when one hundred and forty girls were addressed by his Grace, who stressed the importance of their work, and the day in the country attended by the leaders of the boys’ groups.

Campion Society: The Campion Society has continued its self-sacrificing scheme of handing over to other organisations its best men as soon as they are trained. In this way it considerably lowered its own numbers, and perhaps its external prestige, but it is compensated for this by the success of other work which its members have founded or assisted. It still continues to remain an excellent formation and school for those whose interests in Catholic Action are primarily intellectual and whose desire is to acquit themselves as speakers and writers to help other organisations of a larger and perhaps more practical nature. As usual, it got a number of new recruits from the schools this year, and, despite the demands of military training, has kept the work going excellently.

Literature Crusade: Important steps were taken during the year to begin a Catholic Action Literature Crusade. An enormous amount of necessary spade-work was done by the few pioneers who are laying, quietly but well, the foundations of one of the most important of Catholic Action movements in this country. Several parish groups of the crusade have been started and the prospects of more rapid expansion in 1941 are good. Professional Groups At the beginning of 1940 there were groups of doctors, chemists, journalists and business men, and while these carried on and improved their position during the year, they were added to by an engineers group and the beginning of a lawyers and barristers group.

Catholic Women’s Social Guild: The Catholic Women’s Social Guild executive, and chosen leaders, received a number of lectures on Catholic Action and showed -themselves most anxious to develop a new spirit and technique in their organisation; but the transformation of such a numerically strong organisation must take a long time. Plans are in hand which it is hoped will make a big change in 1941.

Therry Society: The Therry Society began the year with a special Lenten programme on the Mass, which culminated in a Liturgical Evening held in Holy Week, and Dialogue Mass and

Corporate Communion of members on Low Sunday. Dialogue Mass and Corporate Communion was also arranged for the feast of Christ the King, and for the fourth Sunday in Advent as a crown to the year’s work. Four major play productions were held with success, a Christmas play was broadcast during the Catholic Hour, and several smaller presentations were arranged for study and entertainment purposes. Fortnightly classes were conducted for parish leaders interested in the formation of parish drama groups; the annual playwriting contest for Catholic writers in Australia and New Zealand was held; enquiries from many parts of Australia regarding Catholic plays and their production were handled by the Service Department; the Study Department arranged a monthly programme under the general heading of “A New Future for the Heart of Christ in a Land of Peace”; and several successful amicales, and the monthly hikes and camp-fires, all permeated with the true Catholic spirit, were organised by the Social Department.

Paraclete Arts Group: The Paraclete Arts Group, with its groups of artists and writers, was very active throughout the year. At its exhibition of samples of school art his Grace the Archbishop commended their work as being most important and urged them to carry on and expand. Their leaders’ group, with Rev. G. O’Neill, SJ., the chaplain, has worked out an ambitious programme for 1941.

The Grail: The presence of the Ladies of the Grail in Melbourne during last year gave an immense stimulus and feeling of confidence to all girls’ Catholic Action organisations, and this beneficial influence should increase as “Tay Creggan” becomes more firmly established and more widely known. Country Groups: A review of Catholic Action in the Melbourne Archdiocese would not be complete unless mention were made of the groups in towns and country districts which have kept going and even improved their positions in the face of enormous odds. A.I.F. enlistments and compulsory training, together with the “flight to the city,” have made them fight hard for existence.

Catholic Action in Geelong: In the Geelong Deanery Catholic Action organisation is excellent and compares favourably with the Melbourne metropolitan area. The leaders in Geelong can always be relied upon to give generous support to movements initiated in Melbourne which need their help and co-operation.