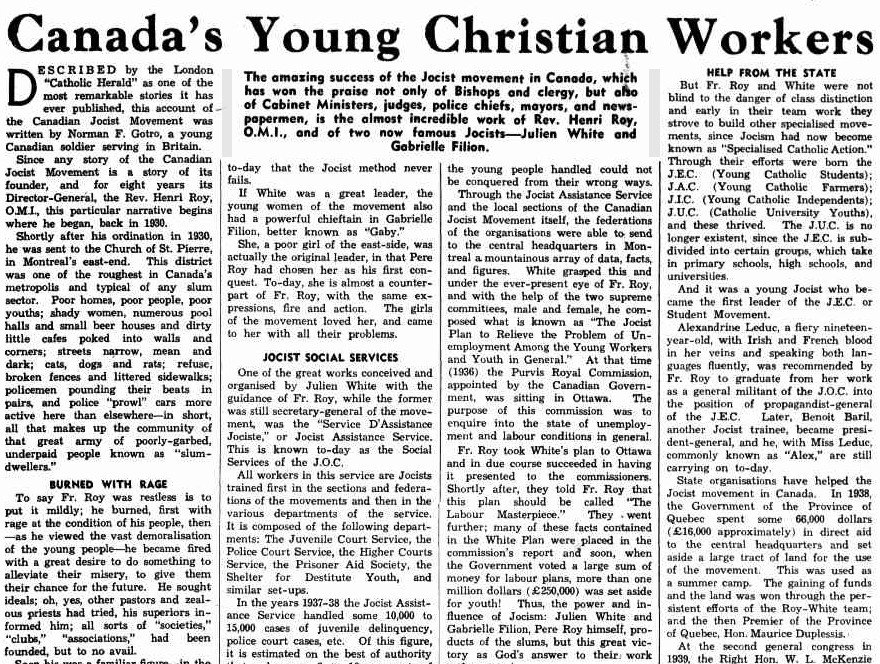 The amazing success of the Jocist movement in Canada, which has won the praise not only of Bishops and clergy, but also of Cabinet Ministers, judges, police chiefs, mayors, and newspapermen, is the almost incredible work of Rev. Henri Roy, O.M.I., and of two now famous Jocists—Julien White and Gabrielle Filion.

DESCRIBED by the London “Catholic Herald” as one of the most remarkable stories it has ever published, this account of the Canadian Jocist Movement was written by Norman F. Gotro, a young Canadian soldier serving in Britain.

Since any story of the Canadian Jocist Movement is a story of its founder, and for eight years its Director-General, the Rev. Henri Roy, O.M.I., this particular narrative begins where he began, back in 1930.

Shortly after his ordination in 1930, he was sent to the Church of St. Pierre, in Montreal’s east-end. This district was one of the roughest in Canada’s metropolis and typical of any slum sector.

To say Fr. Roy was restless is to put it mildly; he burned, first with rage at the condition of his people, then —as he viewed the vast demoralisation of the young people—he became fired with a great desire to do something to alleviate their misery, to give them their chance for the future. He sought ideals; oh, yes, other pastors and zealous priests had tried, his superiors informed him; all sorts of “societies,” “clubs,” “associations,” had been founded, but to no avail.

Soon his was a familiar figure—in the pool halls, small cafes, on corners, in public parks, along the waterfront and near the railroad yards.

Always, his companions were the sons of labourers, youths clad in patched clothing, hungry, hard-boiled. Always, the conversations were the same; he seemed to be for ever asking questions.

But Fr. Roy strove to conquer the leaders of the little neighbourhood gangs. To him, “the biggest bully and the loudest mouth” was not to be condemned: such a person was a “chief and must, be won at all costs.

He conquered some of these gang-leaders and, finally, one day he gathered a handful of these—of both sexes—into the basement of St. Pierre’s Church.

He convinced the early leaders that speed was not important; what was important was the necessity for a solid foundation for a new movement (not a” club or society) for the young workers to be organised by them, led by them, directed by them, with, the most democratic principles and the highest of ideals.

Archbishop Gauthier, lately Metropolitan. of Montreal Archdiocese, became so interested in Fr. Roy’s-work that he sent him off to Belgium to study the work of Canon Cardijn, whose name was becoming prominent in youth activities in Europe.

It would appear that the Hand of God was guiding Fr. Roy, for he came across a young fellow by the name of Julien White. Julien hadn’t much education and his job wasn’t much either, but he appeared to be fiery and anxious to do something for his fellow young workers.

It was Julien White whom Pere Roy placed in charge of the little movement’s organ, the “Young Worker,” and under this leader’s influence, the paper grew and spread rapidly among the French-speaking people of Montreal. Under Fr. Roy’s watchful eye, he studied hard, and shortly after his first appointment- he became the secretary-general of the movement.

White toured the country and organised sections everywhere. His technique was always the same: observation of the conditions by the query system of the J.O.C. (to ask is to learn); judging the facts just garnered in the light of cold reason and with the Christian spirit; action when it was known what had-to be done.

And it is a well-known fact in Canada to-day that the Jocist method never fails. If White was a great leader, the young women of the movement also had a powerful chieftain in Gabrielle Filion, better known as “Gaby.” She, a poor girl of the east-side, was actually the original leader, in that Pere Roy had chosen her as his first conquest.

To-day, she is almost a counterpart of Fr. Roy, with the same expressions, fire and action. The girls of the movement loved her, and came to her with all their problems.

One of the great works conceived and organised by Julien White with the guidance of Fr. Roy, while the former was still secretary-general of the movement, was the “Service D’Assistance Jociste,” or Jocist Assistance Service. This is known to-day as the Social Services of the J.O.C. All workers in this service are Jocists trained first in the sections and federations of the movements and then in the various departments of the service.

It is composed of the following departments: The Juvenile Court Service, the Police Court Service, the Higher Courts Service, the Prisoner Aid Society, the Shelter for Destitute Youth, and similar set-ups. In the years 1937-38 the Jocist Assistance Service handled some 10,000 to 15,000 cases of juvenile delinquency, police court cases, etc.

Of this figure, it is estimated on the best of authority that only some 2 to 10 per cent, of the young people handled could not be conquered from their wrong ways. Through the Jocist Assistance Service and the local sections of the Canadian Jocist Movement itself, the federations of the organisations were able to; send to the central headquarters in Montreal a mountainous array of data, facts, and figures.

White grasped this and under the ever-present eye of Fr. Roy, and with the help of the two supreme committees, male and female, he composed what is known as “The Jocist Plan to Relieve the Problem of Unemployment Among the Young Workers and Youth in General.” At that time (1936) the Purvis Royal Commission, appointed by the Canadian Government, was sitting in Ottawa.

The purpose of this commission was to enquire into the state of unemployment and labour conditions in general. Fr. Roy took White’s plan to Ottawa and in due course succeeded in having it presented to the commissioners.

Shortly after, they told Fr. Roy that this plan should be called “The Labour Masterpiece.” They went further; many of these facts contained in the White Plan were .placed in the commission’s report and soon, when the Government voted a large sum of money for labour plans, more than one million dollars (£250,000) was set aside for youth!

Thus, the power and influence of Jocism: Julien White and Gabrielle Filion, Pere Roy himself, products of the slums, but this great victory as God’s answer to theirj work and prayers!

HELP FROM THE STATE

But Fr. Roy and White were not blind to the danger of class distinction and early in their team work they strove to build other specialised movements, since Jocism had now become known as “Specialised Catholic Action.”

And it was a young Jocist who became the first leader of the J.E.C. or Student Movement. Alexandrine Leduc, a fiery nineteen-year-old, with Irish and French blood in her veins and speaking both languages fluently, was recommended by Fr. Roy to graduate from her work as a general militant of the J.O.C. into the position of propagandist-general of the J.E.C. Later, Benoit Baril, another Jocist trainee, became president-general, and he, with Miss Leduc, commonly known as “Alex,” are still carrying on to-day. State organisations have helped the Jocist movement in Canada.

In 1938, the Government of the Province of Quebec spent some 66,000 dollars (£16,000 approximately) in direct aid to the central headquarters and set aside a large tract of land for the use of the movement. This was used as a summer camp. The gaining of funds and the land was won through the persistent efforts of the Roy-White team; and the then Premier of the Province of Quebec, Hon. Maurice Duplessis.

At the second general congress in 1939, the Right Hon. W. L. McKenzie King, Prime Minister of Canada, sent a lengthy telegram to Fr. Roy, congratulating him on his great work and wishing him continued success for the future. In 1937, there were some 35,000 members of the Jocist movement in Canada. At the 1939 congress, more than 30,000 members from all over Canada and the United States attended, but the actual figures, according to Pere Roy himself, were some 50,000 members in Canada alone, with more in the States, who had been organised by the Canadian leaders.

In November, 1939, Fr. Roy was sent to the New England States (North-Eastern U.S.A.) where in the short space of two months he solidly established and expanded the first American Federation of Jocism and founded the American organ, the “Young Worker.”

There is a central committee which meets on certain occasions to prepare general programmes which are later adapted to a specialised movement’s particular social sphere.

This is known as the Association of Canadian Catholic Youth, and is composed of the secretaries-general of all the specialised movements. Judges, police chiefs, mayors, public servants of all ranks, Ministers of the Cabinet—Federal and Provincial—and even hard-boiled newspapermen have heartily recommended and praised the Jocist movement of Canada.

When Jocism began in Canada, the members of the priesthood were sceptical. Only the young priests could see the value of the movement and the English-speaking priests were wont to say that Jocism was all right for French Canada but not for English Canada.

To-day, they have come to realise that if peace is to be brought back to the world—real peace, true peace—the Jocist movement will be the method whereby that peace will be won!

The Bishops, too, were sceptical; some of the French-speaking ecclesiastics were in favour of it, and the English not at all. But they gradually became “educated” to it, and in 1941 most of the Bishops of Canada are solidly behind Jocism, together with the Canadian Cardinal, Cardinal Villeneuve.

As for the Supreme Pontiffs, the late Pius XI. gave the greatest slogan the movement has ever had: “Jocists, you are the glory of Christ!” (To be continued.)