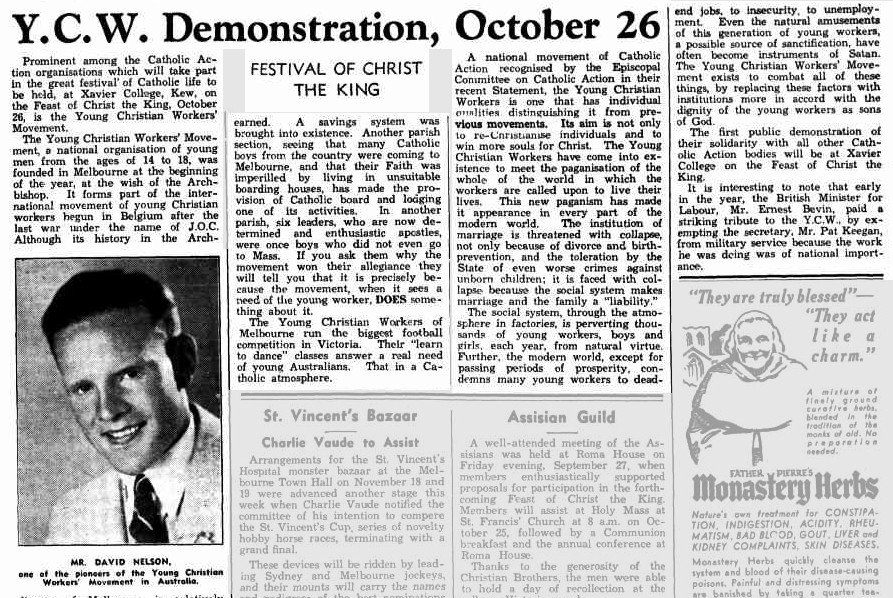 FESTIVAL OF CHRIST THE KING

Prominent among the Catholic Action organisations which will take part in the great festival* of Catholic life to be held, at Xavier College, Kew, on the Feast of Christ the King, October 26, is the Young Christian Workers’ Movement.

The Young Christian Workers’ Movement, a national organisation of young men from the ages of 14 to 18, was founded in Melbourne at the beginning of the year, at the wish of the Archbishop. It forms part of the international movement of young Christian workers begun in Belgium after the last war under the name of J.O.C.

Although its history in the Archdiocese of Melbourne is relatively short, the movement has already; begun its work of caring for the young Australian. Holiday camps, employment agencies, savings schemes, sport competitions—these and other activities come within its scope.

In one Melbourne parish, a flourishing section has been built up of young men previously not practical Catholics. The leader saw that it was the menace of dead-end jobs which was demoralising his young comrades. In another parish, the leaders’ group realised that the majority of young workers were wasting a large part of the money they earned. A savings system was brought into existence.

Another parish section, seeing that many Catholic boys from the country were coming to Melbourne, and that their Faith was imperilled by living in unsuitable boarding houses, has made the provision of Catholic board and lodging one of its activities.

In another parish, six leaders, who are now determined and enthusiastic .apostles, were once boys who did not even go to Mass. If you ask them why the movement won their allegiance -they will tell you that it is precisely because the movement, when it sees a need of the young worker, DOES something about it.

The Young Christian Workers of Melbourne run the biggest football competition in Victoria. Their “learn to dance” classes answer a real need of young Australians, Tliat in a Catholic atmosphere.

A national movement of Catholic Action recognised by the Episcopal Committee on Catholic Action in their recent Statement, the Young Christian Workers is one that has individual Dualities distinguishing it from previous movements. Its aim is not only to re-Christianise individuals and to win more souls for Christ.

The Young Christian Workers have come into existence to meet the paganisation of the whole of the world in which the workers are called upon to live their lives. This new paganism has made it appearance in every part of the modern world. The institution of marriage is threatened with collapse, not only because of divorce and birth prevention, and the toleration by the State of even worse crimes against unborn children; it is faced with collapse because the social system makes marriage and the family a “liability.”

The social system, through the atmosphere in factories, is perverting thousands of young workers, boys and girls, each year, from natural virtue. Further, the modern world, except for passing periods of prosperity, condemns many young workers to dead-end jobs, to insecurity, to unemployment.

Even the natural amusements of this generation of young workers, a possible source of sanctification, have often become instruments of Satan. The Young Christian Workers’ Movement exists to combat all of these things, by replacing these factors with institutions more in accord with the dignity of the young workers as sons of God.

The first public demonstration of their solidarity with all other Catholic Action bodies will be at Xavier College on the Feast of Christ the King. It is interesting to note that early in the year, the British Minister for Labour, Mr. Ernest Bevin, paid a striking tribute to the Y.C.W., by exempting the secretary, Mr. Pat Keegan, from military service because the work he was doing was of national importance.

MR. DAVID NELSON, one of the pioneers of the Young Christian Workers’ Movement in Australia.