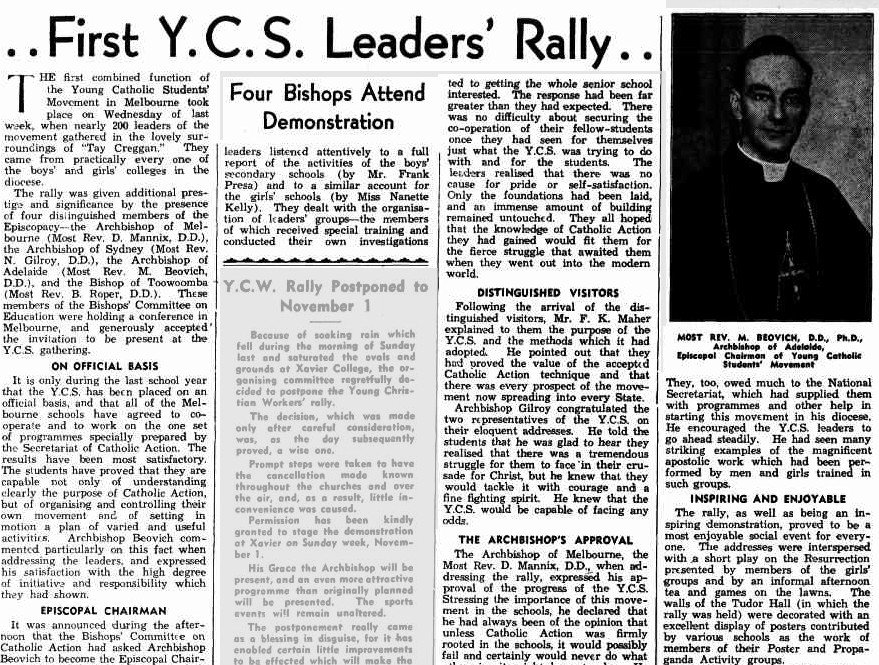 THE first combined function of the Young Catholic Students’ Movement in Melbourne took place on Wednesday of last week, when nearly 200 leaders of the movement gathered in the lovely surroundings of “Tay Creggan.” They came from practically every one of the boys’ and girls’ colleges in the diocese.

These members of the Bishops’ Committee on Education were holding a conference in Melbourne, and generously accepted’ the invitation to be present at the Y.C.S. gathering.

It is only during the last school year that the Y.C.S. has been placed on an official basis, and that all of the Melbourne schools have agreed to cooperate and to work on the one set of programmes specially prepared by the Secretariat of Catholic Action.

The results have been most satisfactory. The students have proved that they are capable not only of understanding clearly the purpose of Catholic Action, but of organising and controlling their own movement and of setting in motion a plan of varied and useful activities.

Archbishop Beovich commented particularly on this fact when addressing the leaders, and expressed his satisfaction with the high degree of initiative and responsibility which they had shown.

leaders listened attentively to a full report of the activities of the boys’ secondary schools (by Mr. Frank Presa) and to a similar account for the girls’ schools (by Miss Nanette Kelly). They dealt with the organisation of kaders’ groups—the members of which received special training and conducted their own investigations

into the problems of school life—and with the numerous activity groups which had been established.

They were resolved that Catholic Action must not be confined to a small group of “elite” or to those generally regarded as very pious or very learned. Their efforts this year had been directed to getting the whole senior school interested. The response had been far greater than they had expected.

There was no difficulty about securing the co-operation of their fellow-students once they had seen for themselves just what the Y.C.S. was trying to do with and for the students.

The leaders realised that there was no cause for pride or self-satisfaction. Only the foundations had been laid, and an immense amount of building remained untouched.

They all hoped that the knowledge of Catholic Action they had gained would fit them for the fierce struggle that awaited them when they went out into the modern world.

Following the arrival of the distinguished visitors, Mr. F. K. Maher explained to them the purpose of the Y.C.S. and the methods which it had adopted. He pointed out that they had proved the value of the accepted Catholic Action technique and that there was every prospect of the movement now spreading into every State. Archbishop Gilroy congratulated the two representatives of the Y.C.S. on their eloquent addresses. He told the students that he was glad to hear they realised that there was a tremendous struggle for them to face “in their crusade for Christ, but he knew that they would tackle it with courage andl a fine fighting spirit. He knew that the Y.C.S. would be capable of facing any odds.

The Archbishop of Melbourne, the Most Rev. D. Mannix, D.D., when addressing the rally, expressed his approval of the progress of the Y.C.S. Stressing the importance of this movement in the schools, he declared that he had always been of the opinion that unless Catholic Action was/firmly rooted in the schools, it would possibly fail and certainly would never do what otherwise it might hope to do. He said also that, just as the Church in Australia owes its success to the -excellent system of Catholic education, Catholic Action, if it~~is to be- lasting and binding, must capture the schools. They had done splendid work in the short time they have been working with the Secretariat, and he personally had not listened with more pleasure to any address than to those of the boy and girl who spoke on behalf of the movement.

His Grace concluded by thanking the Secretariat, the Ladies of the Grail and particularly the superiors of the colleges—all of whom had co-operated with such happy, results.

Bishop Roper told the students that in Toowoomba, also, there was a very strong and flourishing movement in the schools. He said the students there were also very keen and active.

They, too, owed much to the National Secretariat, which had supplied them with programmes and either help in starting this movement in his diocese. He encouraged the Y.C.S. leaders to go ahead steadily. He had seen many striking examples of the magnificent apostolic work which had been performed by men and girls trained in such groups.

The rally, as well as being an inspiring demonstration, proved to be a most enjoyable social event for everyone. The addresses were interspersed with .a short play on the Resurrection presented by members of the girls’ groups and by an informal afternoon tea and games on the lawns.

The walls of the Tudor Hall (in which the rally was held) were decorated with an excellent display of posters contributed by various schools as the work of members of their Poster and Propaganda Activity groups.

The rally ended with Solemn Benediction, which was given by- the Archbishop, Most Rev. D. Mannix, D.D., assisted by Rev. Fr. Hackett and Rev. D. Conquest. This was an impressive and inspiring finale’ to the afternoon. The altar, framed in the great windows of the Tudor Hall, was flanked on either side by the gaily coloured banners of the Youth Movements.

Six stalwart lads served Benediction, while at each side of the hall stood five boys and five girls bearing banners which they lowered in salute to the Blessed Sacrament. . . .

Kneeling behind their Bishops, they renewed their determination to labour for the Kingdom of Christ in their native land and pledged their loyalty and energies to the Hierarchy of Australia to accomplish, now and in the future, whatever apostolic work might be committed to them, for the youth of the whole nation.