(From “The Advocate’s” London Correspondent)

Reports from France state that strong resistance to the attempted deportation of Jews from Unoccupied France came from Catholics. It is reported that every Catholic family in Lyons sheltered Jews threatened with deportation. Many Jews were assisted in escaping to Switzerland by priests and identity cards and passports were provided. In Toulouse, Jewish children were given sanctuary in Catholic schools.

A fierce attack upon the Church was made in the Paris “Oeuvre,” by Marcel Deat, the French Fascist leader who urges stronger collaboration with the “Axis.” “Many Catholic prelates and priests,” he says, ”are profoundly convinced that National Socialism represents the most dangerous and pernicious form of anti-religion.”

It is interesting to note that the “Jocists,” or Young Christian Workers, whose founder, Canon Cardijn, was recently arrested by the Nazis in Belgium, are described as the “ringleaders” in the forces resisting collaboration with the Nazi regime. 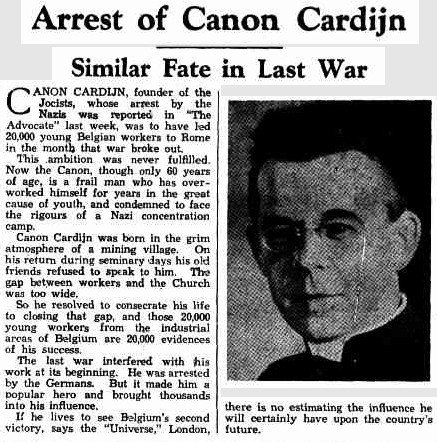 CANON CARDIJN, founder of the Jocists, whose arrest by the Nazis was reported! in “The Advocate” last week, was to have led 20,000 young Belgian workers to Rome in the month that war broke out.

This ambition was never fulfilled. Now the Canon, though, only 60 years of age, is a frail man who has overworked himself for years in the great cause of youth, and condemned to face the rigours of a Nazi concentration camp.

Canon Cardijn was born in the grim atmosphere of a mining village. On his return during seminary days his old friends refused to speak to him. The gap between workers and the Church was too wide.

So he resolved to consecrate his life to closing that gap, and those 20,000 young workers from the industrial areas of Belgium are 20,0.00 evidences of his success.

The last War interfered with |his work at its beginning. He was arrested by the Germans. But it made him a popular hero and brought thousands into his influence.

If he lives to see Belgium’s second victory, says the “Universe,” London, there is no estimating the influence he will certainly have upon the country’s future.

Canon Cardijn, founder of the Jocists, the Young Christian Workers, has been arrested by the Germans in Belgium, it is reported. The charge is refusal to cooperate in schemes for sending Belgian workers to Germany.