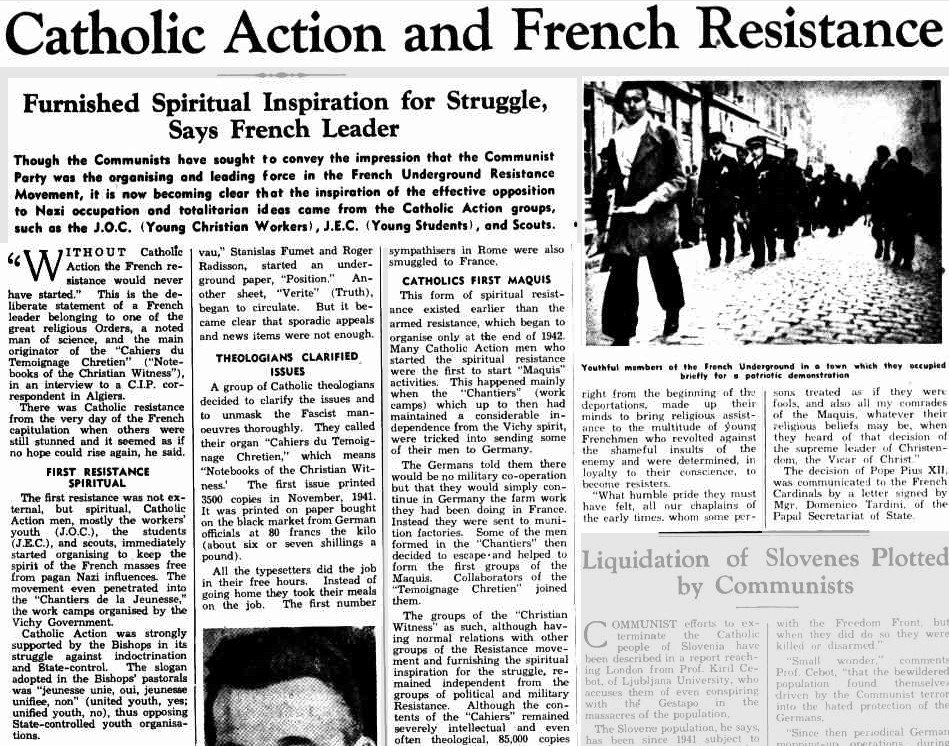 Though the Communists have sought to convey the impression that the Communist Party was the organising and leading force in the French Underground Resistance Movement, it is now becoming clear that the inspiration of the effective opposition to Nazi occupation and totalitarian ideas came from the Catholic Action groups, such as the J.O.C. (Young Christian Workers), J.E.C. (Young Students), and Scouts.

WITHOUT Catholic Action the French Catholic resistance “would never have started.” This is the deliberate statement of a French leader belonging to one of the great religious Orders, a noted man of science, and the main originator of the “Cahiers du Temoignage Chretien” (“Notebooks of file Christian Witness”), in an interview to a C.I.P. correspondent in Algiers.

There was Catholic resistance from the very day of the French capitulation when others were still stunned and it seemed as if no hope could rise again, he said.

The first resistance was not external, but spiritual, Catholic Action men, mostly the workers’ youth (J.O.C,), the students (J.E.C.), and scouts, immediately started organising to , keep the spirit of the French masses free from pagan Nazi influences. The movement even penetrated into the “Chantiers de la Jeunesse,” the work camps organised by the Vichy Government.

Catholic Action was strongly supported by the Bishops in its struggle against indoctrination and State-control. The slogan adopted in the Bishops’ pastorals was “jeunesse unie, oui, jeunesse unifiee, non” (united youth, yes; unified youth, no), thus opposing State-controlled youth organisations.

In this first period of resistance, the ideological and practical opposition against totalitarianism was just as sharp as now, but there was no clarity about its political form. De Gaulle was very little known, and many who admired him for his broadcasts and saw in him a symbol of free France did not think that he offered a solution of their internal problems. It was not infrequent to hear affirmations that Petain was playing a double game to fool the Germans and that actually he agreed with De Gaulle.

In the second half of 1941 these groups of spiritual resistance resolutely began to oppose Vichy as the shield and instrument of the Germans. There were some struggles, but at the end of ’41 it was clear to most young Catholics that Vichy meant ideological surrender and that its defeatist propaganda had to be fought with all means, to save the spirit of France. At first, this opposition was voiced in certain articles and columns of religious papers. The .most influential organs of this tendency, “Temps Nouveau” and “Esprit,”’ were soon suppressed by Darlan.

The Catholic daily, “La Croix,” under direction of the Abbe Merklen and Monsieur Michelin, went on prudently but firmly combating the totalitarian ideology, and, because of its semiofficial character as organ of the Hierarchy, Vichy did not dare to suppress it. The leaders of “Temps Nouveau,” Stanislas Fumet and Roger Radisson, started an underround paper, “Position.” Aonther sheet, “Verite” (Truth), began to circulate. But it became clear that sporadic appeals nd news items were not enough.

A group of Catholic theologians decided to clarify the issues and o unmask the Fascist maneuvres thoroughly. They called heir organ “Cahiers du Temoingage Chretien,” which means “Notebooks of the Christian Witness.” The first issue printed 3500 copies in November, 1941. It was printed on paper bought on the black market from German officials at 80 francs the kilo (about six or seven shillings a pound).

All the typesetters did the job in their free hours. Instead of going home they took their meals on the job. The first number had to be reprinted several times and soon the Cahiers were printed in three different towns in France.

The Christian underground organisations of the North, more compact than those of the South, were most intricately ramified. Sometimes one or more of the distributors of the Cahiers were caught, but the system of communication prevented any interruption in production or dissemination. Each collaborator knew only one man under him and one above him. Some men living in the same house never knew which of the others was also in the “Temoignage” network.

All Bishops received the “Cahiers du Temoignage Chretien,” many approved it, some knew where it came from. The “Cahiers” were also smuggled to Rome, and there also some wise and highly-placed men did not conceal, their approval. Messages from certain ecclesiastical sympathisers in Rome were also muggled to France.

This form of spiritual resistnce existed earlier than the rmed resistance, which began to rganise only at the end of 1942, any Catholic Action men who tarted the spiritual resistance ere the first to start “Maquis” activities. This happened mainly when the “Chantiers” (work camps) which up to then had maintained a considerable independence from the Vichy spirit, were tricked into sending some of their men to Germany.

The Germans told them there would be no military co-operation but that they would simply continue in Germany the farm work they had been doing in France. Instead they were sent to munition factories. Some of the men formed in the “Chantiers” then decided to escape*and helped to form the first groups of the Maquis. Collaborators of the “Temoignage Chretien” joined them.

The groups of the “Christian Witness” as such, although having normal relations with other groups of the Resistance movement and furnishing the spiritual inspiration for the struggle, remained independent from the groups of political and military Resistance. Although the contents of the “Cahiers” remained severely intellectual and even often theological, 85,000 copies were printed of the last numbers before the liberation. As each copy was discreetly passed on to several persons, this meant that several hundreds of thousands read the issues.

The popular edition, “Courier Francaise du Temoignage Chretian,” consisting of four pages with short stories and simple articles, had to print 280,000 copies from the sixth number on, which probably meant a million readers.

Summarising his experiences, the French leader emphasised the point that the great idea of justice, or what may be called the cult of justice, was the lasting fruit of the period of resistance against deception and defeatism. He says the new generation of intellectuals, together with the masses, is now conscient of the depth of the crisis in society, and will see to it that justice is established as the root of a new political structure.

His Holiness Pope Pius XII was especially solicitious for the spiritual welfare of the Catholic Underground and instructed the French Bishops to arrange for religious and moral assistance for the men. (See “Advocate,” “Jocists Among the Maquis,” January 31, 1945) ‘

“The Pope had given orders to the French Bishops to assign’ priests, with all the privileges of military chaplains, for the spiritual assistance of the men of the Maquis. Thus, after the liberation of Rome, official recognition was given the mission of those ‘cures du Maquis’ (Maquis Pastors) whos without hesitation, right from the beginning of the deportations, made up their minds to bring religious assistance to the multitude of young Frenchmen who revolted against the shameful insults of the enemy and were determined, in loyalty to their conscience, to become resisters.

“What humble pride they must have felt, all our chaplains of the early times, whom some persons treated as if they were fools, and also all my comrades of the Maquis, whatever their religious beliefs may be, when they heard of that decision of die supreme leader of Christendom, the Vicar of Christ.”

The decision of Pope Pius XII, was communicated to the French Cardinals by a letter signed by Mgr. Domenico Tardini, of the Papal Secretariat of State.

CANON CARDIJN Founder of the J.O.C.