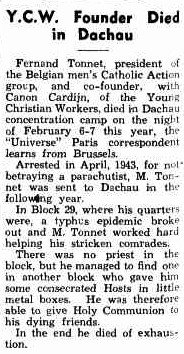 Fernand Tonnet, president of the Belgian men’s Catholic Action group, and co-founder, with Canon Cardijn, of the Young Christian Workers, died in Dachau concentration camp on the night of February 6-7 this year, the “Universe” Paris correspondent learns from Brussels.

Arrested in April, 1943, for not betraying a parachutist, M. Tonnet was sent to Dachau in the following year.

In Block 29, where his quarters were, a typhus epidemic broke out and M. Tonnet worked hard helping his stricken comrades.

There was no priest in the block, but he managed to find one in another block who gave him some consecrated Hosts in little metal boxes.

He was therefore able to give Holy Communion to his dying friends. In the end he died of exhaustion.