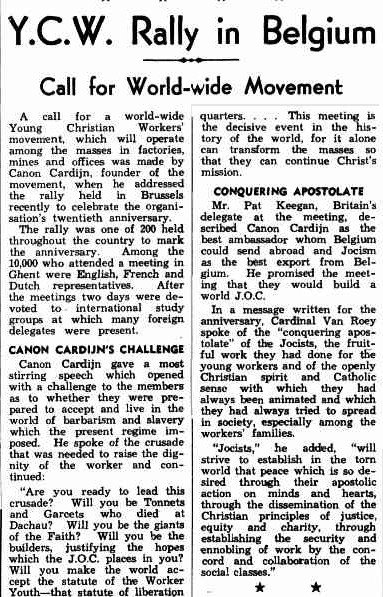 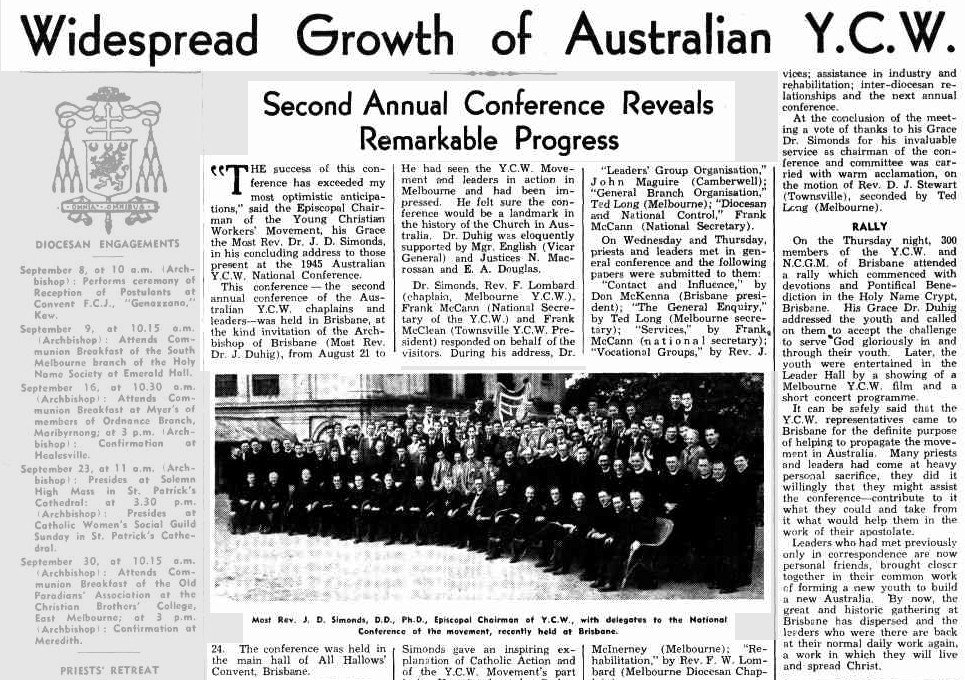 THE success of this conference has exceeded my most optimistic anticipations,” said the Episcopal Chairman of the Young Christian Workers’ Movement, his Grace the Most Rev. Dr. J. D. Simonds, in his concluding address to those present at the 1945 Australian Y.CAV. National Conference.

This conference — the second annual conference of the Australian Y.C.W. chaplains and leaders—was held in Brisbane, at the kind invitation of the Archbishop of Brisbane (Most Rev. Dr. J. Duhig), from August 21 to 24. The conference was held in the main hall of All Hallows’ Convent, Brisbane.

The attendance of priests and Y.C.W. leaders was impressive. The 100 leaders and 60 priests present were representative of the following 13 dioceses of Australia—Cairns, Townsville, Rockhampton, Toowoomba, Brisbane, Armidale, Maitland, Sydney, Wagga, Sandhurst, Melbourne, Ballarat and Port Augusta.

Although the conference occupied only three days (Tuesday, Wednesday and Thursday) the whole week was devoted to special Y.C.W. activity. Features were:

Sunday, August 19.—One-day retreat for Y.C.W. leaders at the Marist Fathers’ Monastery, Ashgrove. 100 leaders made the retreat, which was splendidly conducted by Rev. V. Arthur, of St. Michael’s, North Melbourne.

Archbishop’s Welcome to Y.C.W. Visitors.—On Monday night in the Brisbane Leader Hall, his Grace the Most Rev. J. Duhig, publicly welcomed Dr. Simonds, the visiting clergy and Y.C.W. leaders to Brisbane. In heartily welcoming the visitors, Dr. Duhig said here in Australia both the nation and the Church needed youth, and he was sure that- youth would not fail them.

He had seen the Y.C.W. Movement and leaders in action in Melbourne and had been impressed. He felt sure the conference would be a landmark in the history of the Church in Australia. Dr. Duhig was eloquently supported by Mgr. English (Vicar General) and Justices N. Macrossan and E. A. Douglas. Dr. Simonds, Rev. F. Lombard (chaplain, Melbourne Y.C.W.), Frank’ McCann (National Secretary of the Y.C.W.) and Frank McClean (Townsville Y.C.W. President) responded on behalf of the visitors. During his address, Dr. Simonds gave an inspiring explanation of Catholic Action and of .the Y.C.W. Movement’s part in it. He pointed out that Catholic Action was as old as the Church. “It was not the Popes,” he said, “who opened the priesthood to the laity—it was Christ. The Popes have merely reminded us of that fact. The Y.C.W. must begin in the parishes; first with small numbers of leaders who would be trained in the technique of the movement. The Y.C.W. was an apostolic movement—an official sharing in the Bishop’s apostolate.”

Holy Mass was celebrated by Rev. F. W. Lombard in All Hallows’ Hall at 9.30 a.m. on Tuesday, August 21, to mark the opening of the conference. At the conclusion of Mass Dr. Simonds, who presided throughout the conference, delivered his opening address. Congratulating priests and leaders on the zeal which had brought them to Brisbane for this important conference, Dr. Simonds also reminded them that the Sacrament of Baptism enabled us to share in the life of Christ and therefore in the priesthood of Christ. Confirmation added to this sharing in the priesthood of Christ.

The priests and leaders had separate conferences on the Tuesday. The following papers were read to the priests: “The Choice of Leaders,” by Rev. R. Walton (Toowoomba); “Spiritual Formation,” by Rev. D. J. Stewart (Townsville); “The Gospel Meditation,” by Rev. A. Tynan (Brisbane).

The leaders heard and discussed these papers: “Leaders’ Group Organisation,” John Maguire (Camberwell); “General Branch Organisation,” Ted Long (Melbourne); “Diocesan and National Control,” Frank McCann (National Secretary). On Wednesday and Thursday, priests and leaders met in. general conference and the following papers were submitted to them: “Contact and Influence,” by Don McKenna (Brisbane president); “The General Enquiry,” by Ted Long (Melbourne secretary); “Services,” by Frank McCann (national secretary); “Vocational Groups,” by Rev. J. Mclnerney (Melbourne); “Rehabilitation,” by Rev. F. W. Lombard (Melbourne Diocesan Chaplain). Each paper was followed by discussions among small groups and in this way many useful suggestions were forthcoming when group leaders reported back to the general assembly. The conference was brought to a close with a summary of the proceedings by Dr. Simonds. His Grace thanked everyone present for their zealous co-operation and the hard work they had put into the conference. He also expressed pleasure at the outstanding success of the conference, which had exceeded his most optimistic anticipations.

Thursday afternoon and Friday were devoted to a meeting of the Provisional National Committee. The committee, which is only a provisional one, is, for the present, appointed by the Episcopal Chairman and consists of representatives from each diocese where the Y.C.W. is established. The national secretary’s report revealed the continuous growth and development of the movement throughout Australia. The movement now has groups in 20 Catholic dioceses in Australia; has a membership of ten thousand and can claim 1000 leaders partly or fully trained. Reports were submitted by representatives of other dioceses represented, and they showed favourable progress.

A large agenda was gone through by the committee on a variety of items, including the 1946 national programme for the Y.C.W.; consolidation of leadership training; extension of services; assistance in industry and rehabilitation; inter-diocesan relationships and the next annual conference. At the conclusion of the meeting a vote of thanks to his Grace Dr. Simonds for his invaluable service as chairman of the conference and committee was carried with warm acclamation, on the motion of Rev. D. J. Stewart (Townsville), seconded by Ted Long (Melbourne).

On the Thursday night, 300 members of the Y.C.W. and N.C.G.M. of Brisbane attended a rally which commenced with devotions and Pontifical Benediction in the Holy Name Crypt, Brisbane. His Grace Dr. Duhig addressed the youth and called on them to accept the challenge to serve God gloriously in and through their youth. Later, the youth were entertained in the Leader Hall by a showing of a Melbourne Y.C.W. film and a short concert programme.

It can be safely said that the Y.C.W. representatives came to Brisbane for the definite purpose of helping to propagate the movement in Australia, Many priests and leaders had come at heavy personal sacrifice; they did it willingly that they might assist the conference—contribute to it what they could and take from it what would help them in the work of their apostolate.

Leaders who had met previously only in correspondence are now personal friends, brought closer together in their common work of forming a new youth to build a new Australia. By now, the great and historic gathering at Brisbane has dispersed and the leaders who were there are back at their normal daily work again, a work in which they will live and spread Christ.

Most Rev. J. D. Simonds, D.D., Ph.D., Episcopal Chairman of Y.C.W., with delegates to the National Conference of the movement, recently held at Brisbane.