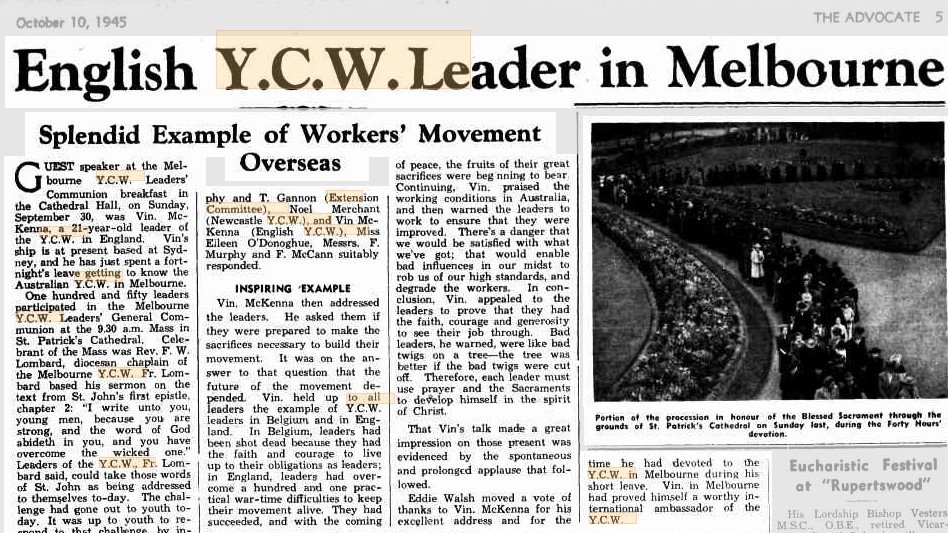 G UEST speaker at the Melbourne Y.C.W. Leaders’ Communion breakfast in the Cathedral Hall, on Sunday, September 30, was Vin. Mc-Kenna, a 21-year-old leader of the Y.C.W. in England. Vin’s ship is at present based at Sydney, and he has just spent a fortnight’s leave getting to know the Australian Y.C.W. in Melbourne. One hundred and fifty leaders participated in the Melbourne Y.C.W. Leaders’ General Communion at the 9.30 a.m. Mass in St. Patrick’s Cathedral. Celebrant of the Mass was Rev. F. W. Lombard, diocesan chaplain of the Melbourne Y.C.W. Fr. Lombard based his sermon on the text from St. John’s first epistle, chapter 2: “I write unto you, young men, because you are strong, and the word of God abideth in you, and you have overcome the wicked one.” Lekders of the Y.C.W., Fr. Lombard said, could take those words of St. John as being addressed to themselves to-day. The challenge had gone out to youth today. It was up to youth to respond to that challenge, by increasing their faith, by their loyalty to their Catholic Action Movement, and by having the courage to live Christ always. In proposing the toast of “The Hierarchy and Clergy,” at the subsequent Communion breakfast, Ted Long reminded leaders of what they owed to the Hierarchy and clergy, and asked them to have an even greater loyalty to their Archbishop and priests. – Fr. Lombard, in reply, thanked the Y.C.W. executive, the Extension Committee, Frank McCann, and all present for what they, had done for the Y.C.W. Frfmk Dunn extended a warm welcome to the following guests at the breakfast: Miss Eileen CDonoghue (N.C.G.M.), Miss Shirley Howard (Y.C.S.), Mr. Frank McCann (National Secretary, Y.C.W.), Messrs. F. Mur-

phy and T. Gannon (Extension Committee), Noel Merchant (Newcastle Y.C.W.), and Vin Mc-Kenna (English Y.C.W.), Miss Eileen O’Donoghue, Messrs. F. Murphy and F. McCann suitably responded. INSPIRING ‘EXAMPLE Vin. McKenna then addressed the leaders. He asked them if they were prepared to make the sacrifices necessary to build their movement. It was on the answer to that question that the future of the movement depended. Vin. held up to all leaders the example of Y.C.W. leaders in Belgium and in England. In Belgium, leaders had been shot dead because they had the faith and courage to live up to their obligations as leaders; in England, leaders had overcome a hundred and one practical war-time difficulties to keep their movement alive. They had succeeded, and with the coming

of peace, the fruits of their great sacrifices were beginning to bear. Continuing, Vin. praised the working conditions in Australia, and then warned the leaders to work to ensure that they were improved. There’s a danger that we would be satisfied with what we’ve got; that would enable bad influences in our midst to rob us of our high standards, and degrade the workers. In conclusion, Vin. appealed to the leaders to prove that they had the faith, courage and generosity to see their job through. Bad leaders, he warned, were like bad twigs on a tree—the tree was better if the bad twigs were cut off. Therefore, each leader must use prayer and the Sacraments to develop himself in the spirit of Christ. That Vin’s talk made a great impression on those present was evidenced by the spontaneous and prolonged applause that followed. Eddie Walsh moved a vote of thanks to Vin. McKenna for his excellent address and for the

Portion of the procession in honour of the Blessed Sacrament through the grounds of St. Potrick’s Cathedral on Sunday last, during the Forty Hours devotion.