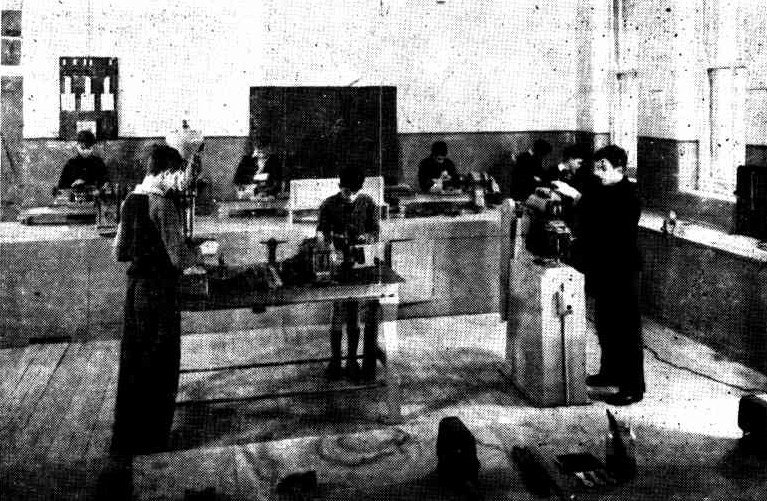 A MACHINE shop, the first section of St. Ignatius’ Trade School, Richmond, established to .train and protect boys from “dead-end” jobs, will be blessed and opened by his Grace Archbishop Mannix on Sunday afternoon, August 4, at 3 p.m. St. Ignatius’ Trade School has been established by the Richmond branch of the National Christian Workers’ Movement. Two years ego, a section of the members, under the leadership of Mr. Frank Murphy, set out to establish a Vocational Guidance and Employment Bureau to assist their members with their employment problems. Restricted by manpower controls, they interested themselves in the future welfare of the senior pupils of St. Ignatius’ School. Talks were given to the senior pupils of the school on pitfalls to be avoided, and the advisability of planning carefully for the future. The bureau was fully

explained, and, ^as a result, has been responsible” for placing many boys in good positions in the industrial world. The bureau always keeps in close contact with the boys and the employer. A great step forward was taken a year ago when it was decided to help the boys by training them to be technicians. To this end it was resolved to establish the “St. Ignatius’ Machine Shop” and give boys during their last two years at school training in the use of machines; training that would enable them to choose a trade that would not only appeal to them, but for which they would be entirely suited. Remarkable success followed their efforts. Despite difficulties that, at times, seeme<j[ insuper-

able, the machine shop is now equipped with modern machinery for both engineering and woodworking. All the machines are equipped with self-contained motors and a special diamond cutting machine has also been installed. A room off the machine shop has been reserved for drawing and theory/ The swinging over of the electrical installations to three-phase was a big undertaking, but this also has been completed and painters have transformed the colour scheme of the machine shop and the machines themselves. The National Christian Workers at Richmond hope that others will follow their lead and that similar establishments will be founded throughout Australia, and cordially invite all interested parents to attend the opening ceremony on August 4 to inspect the machine shop and to support this work for building a new youth— in the schoolroom. 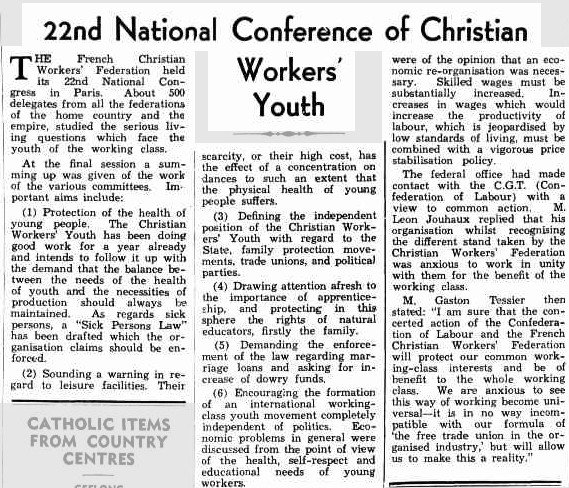 THE French Christian Workers’ Federation held its 22nd National Congress in Paris. About 500 delegates from all the federations of the home country and the empire, studied the serious living questions which face the youth of the working class. At the final session a summing up was given of the work of the various committees. Important aims include:

(1) Protection of the health of young people. The Christian Workers Youth has been doing, good work for a year already and intends to follow it up with the demand that the balance between the needs of the health of youth and the necessities of production should always be maintained. As regards sick persons, a “Sick Persons Law” has been drafted which the organisation claims should be enforced.

(2) Sounding a warning in regard to leisure facilities. Their scarcity, or their high cost, has the effect of a concentration on dances to such an extent that the physical health of young people suffers.

(3) Defining the independent position of the Christian Workers’ Youth with regard to the State, family protection movements, trade unions, and political parties.

(4) Drawing attention afresh-to the importance of apprenticeship, and protecting in this sphere the rights of natural educators, firstly the family.

(5) Demanding the enforcement of the law regarding marriage loans and asking for increase of dowry funds.

(6) Encouraging the formation of an international workingclass youth movement completely independent of politics. Economic problems in general were discussed from the point of View of the health, self-respect and educational needs of young workers.

A question on the results of the 22nd Congress of the French Christian Workers’ Federation brought the following reply from M. Gaston Tessier, the general secretary:

“I will not attempt to conceal from you that this gathering of young militants, tempered in the crucible of the Resistance Movement and trained by direct action brings great joy and hope for the future to an old militant like myself. The French Christian Workers’ Federation is extending its influence more and more amongst workers and young people; does not this fact promise us a useful and propitious career in the service of the working class? Our influence even extends to .North Africa, where we are taking firm hold.”

The discussions were naturally mainly around wages and prices. Whilst they were aware of the danger of a futile race between wages and prices, the delegates were of the opinion that an economic re-organisation was necessary. Skilled wages must be substantially increased. Increases in wages which would increase the productivity of labour, which is jeopardised by low standards of living, must be combined with a vigorous price stabilisation policy.

The federal office had made contact with the C.G.T. (Confederation of Labour) with a view to common action. M. Leon Jouhaux replied that his organisation whilst recognising the different stand taken by the Christian Workers’ Federation was anxious to work in unity with them for the benefit of the working class.

M. Gaston Tessier then stated: “I am sure that the concerted action of the Confederation of Labour and the French Christian Workers’ Federation will protect our common working-class interests and be of benefit to the whole working class. We are anxious to see this way of working become universal—it is in no way incompatible with our formula of ‘the free trade union in the organised industry,’ but will allow us to make this a reality.”