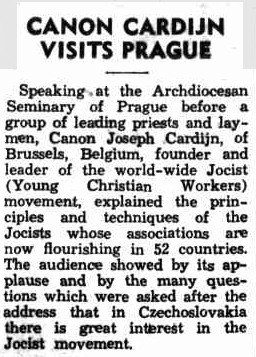 Speaking at the Archdiocesan Seminary of Prague before group of leading priests and laymen, Canon Joseph Cardijn, of Brussels, Belgium, founder and leader of the world-wide Jocist (Young Christian Workers) movement, explained the principles and techniques of the Jocists whose associations are now flourishing in 52 countries The audience showed by its applause and by the many questions which-were asked after the address that in Czechoslovakia there is great interest in the Jocist movement. 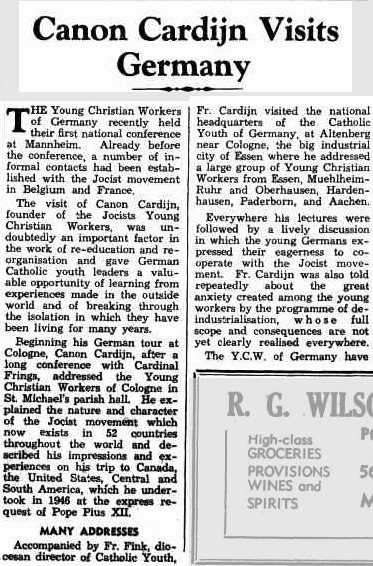 THE Young ChristianWorkers of Germany held their first national conference at Mannheim. Already before the conference, a number of informal contacts had been established with the Jocist movement in Belgium and France.

The visit of Canon Cardijn, founder of the Jocists Young Christian Workers, was undoubtedly an important factor in the work of re-education and reorganisation and gave German Catholic youth leaders a valuable opportunity of learning from experiences made in the outside world and of breaking through the isolation in which they have been living for many years.

Beginning his German tour at Cologne, Canon Cardijn, after a long conference with Cardinal Frings, addressed the Young Christian Workers of Cologne in St Michael’s parish hall He explained the nature and character of the Jocist movement which now exists in 52 countries throughout the world and described his impressions and experiences on hjs trip to Canada, the, United States,) Central and South America, which he undertook in 1946 at the express request of Pope Pius XII. ‘”

Accompanied by Fr. Sink, diocesan director of Catholic Youth, Fr. Cardijn visited the national headquarters of the Catholic Youth of Germany, at Altenberg near Cologne, the big industrial city of Essen where he addressed a large group of Young Christian Workers from Essen, Muehlheim-Ruhr and Oberhausen, Hardenhausen, Paderborn, and Aachen.

Everywhere his lectures were followed by a lively discussion in which the young Germans expressed their eagerness to cooperate with the Jocist movement. Fr. Cardijn was also told repeatedly about the great anxiety created among the young workers by the programme of deindustrialisation, whose full scope and consequences are not yet clearly realised everywhere.

The Y.C.W. of Germany have not yet been given their final organisational form. They will probably be established as a specialised section inside the Catholic Youth of Germany, whose headquarters are at Altenberg.