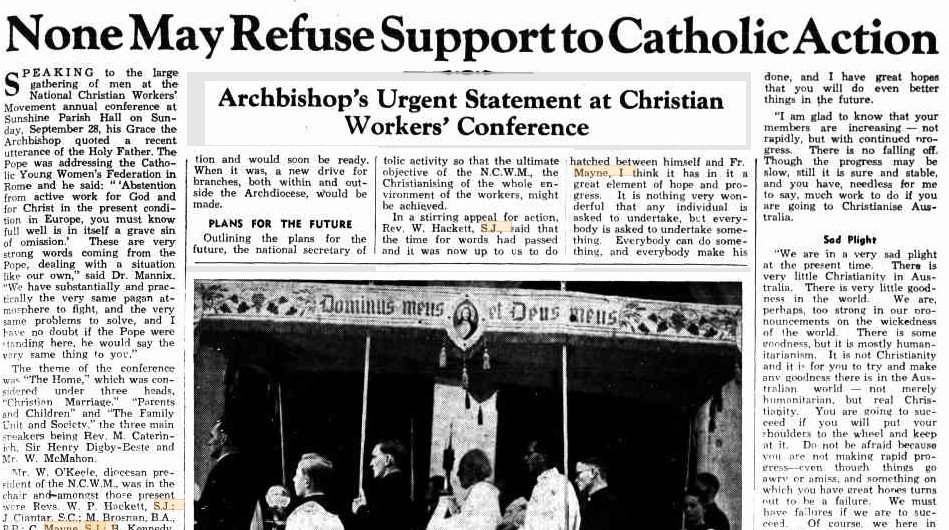 SPEAKING to the large gathering of men at the — National Christian Workers’ Movement annual conference at Sunshine Parish Hall on Sunday, September 28, his Grace the Archbishop quoted a recent utterance of the Holy Father. The Pope was addressing the Catholic Young Women’s Federation in Rome and he said: ” ‘Abstention from active work for God and for Christ in the present condition in Europe, you must know full well is in itself a grave sin of omission.’ These are very strong words coming from the Pope, dealing with a situation like our own,”‘ said Dr. ‘Mannix. “We have substantially and practically the very same pagan atmosphere to fight, and the very same problems to solve, and I have no doubt if the Pope were standing here, he would say the very same thing to you.”

The theme of the conference was “The Home,” which was considered under three heads, “Christian Marriage.” “Parents and Children” and “The Family Unit and Society.” the three rriain speakers being Rev. M. Caterinich, Sir Henry Digby-Beste and Mr. W. McMahon.

In his address of welcome to the Archbishop the parish priest of Sunshine, Fr. Ryder, said that according to the reports of those who had been overseas Catholic Action in Australia could compare favourably with any other part of the world. Whatever success we had had here was in very large measure due to the wise guidance and wonderful sunport that Dr. Mannix had given it. Under present condition^, he said, none could hold back and refuse their full support to Catholic Action.

In his annual report the diocesan secretary, Mr. T. Cushen, said that the progress during the past 12 months had been very satisfactory. Membership had risen and there were now more than 1000 members in the N.C.W.M. in the Melbourne Archdiocese. Services and activities were growing and the spirit of the movement was at a very high level. Groups at West Brunswick and West Footscray had formed branches during the year. The former, although it had been in existence for only six months, already had over 90 members^ and was one of the most successful branches in the movement.

Groups were in process of formation at East Brunswick, Ascot Vale, Flemington and Castlemaine.

The two N.C.W.M. Co-operative Housing Societies had held their first annual general meetings in September and their reports were most satisfactory. There were approximately 60 members in the 22-year society and 126 in the 30-year society. Altogether, 40 members had started to build homes. Their applications for loans totalling about £46,000 had been granted, and four houses were completed and occupied.

Other services reported on were credit union, vocational guidance and employment bureaux, handy-man service, cooperative buying clubs and advice on taxation, gardening, social services and various other practical problems in the lives of adult workers.

A complete new training programme incorporating all the latest developments in Catholic Action was in course of preparation and would soon be ready. When it was, a new drive for branches, both within and outside the Archdiocese, Would be made.

PLANS FOR THE FUTURE

Outlining the plans for the future, the national secretary of the movement, Mr. K. W. Mitchell, said that although great success had been achieved by the N.C.W.M,, until recently two problems had worried the executive and the leaders’ groups. Firstly, though there was great loyalty and enthusiasm amongst the ordinary members, there was no organised apostolic work undertaken by them, and it was of the essence of Catholic Action that every person who joined its army should become an active apostle. Secondly, there had not been, so far, any organised and systematised attack on the environment itself—in the factories, workshops and offices, in the homes arid the various places where men spent their leisure time.

The executive had now devised a plan which it felt confident would provide the solution to these two problems. Every, leader in the movement was asked to form a sub-leaders’ group comprising four or five members of his branch who lived in his immediate neighbourhood. The members of these sub-groups would, on the one hand, assist in the running of the branch and gradually take off the leaders’ shoulders all the organising and a d m i n i strative responsibility; and, on the other hand, would endeavour to form “teams of influence” in the environment through which they would spread the ideas of the movement and endeavour to Christianise the various spheres of -the work, the home and the leisure in which they spent their daily lives. Mr. Mitchell strongly urged all members to back up this plan and to develop and extend their apostolic activity so that the ultimate objective of the N.C.W.M., the Christianising of the whole environment of the workers, might be achieved.

In a stirring appeal for action, Rev. W. Hackett, S.J., said that the time for words had passed and it was now up to us to do sromething. Australians were altogether too apathetic, and if they did not bestir themselves now the country might well be plunged into the dreadful chaos that we had witnessed in Europe followed by the oppression of totalitarianism.

“If I could be carried away,” said his Grace the Archbishop, “I should have been carried away by that passionate address just delivered by Fr. Hackett. Everything that he said was something you have to take to heart, and the appeal that he made to you, in such eloquent and passionate language, is really the appeal that I have been making, much more feebly, for many years—not altogether without result—but now that the real Catholic Actionists have come into line with Fr. Hackett and Mr. Mitchell and others, I am looking forward to great strides in Catholic Action in the near future.

“When I listened to Mr. Mitchell explaining this new system, which apparently has been hatched between himself and Fr. Mayne, I think it has in it a great element of hope and progress. It is nothing very wonderful that any individual is asked to undertake, but everybody is asked to undertake something. Everybody can do something, and everybody make his own contribution. This scheme now put before you will yield very valuable results in the near, future.

“Another thing that occurred to me was that Fr. Mayne and Mr. Mitchell might seem to be making big demands upon you, but we are not asking you to do anything that the Communists are not doing already, and doing with marvellous results—from their point of view. They have no difficulty about spending their time and devoting their energy to the promotion of their own particular objective, and if only we are as much interested in Christ’s cause as they are in the cause of the Evil One, there ought to be progress on our side, and I have great hopes that you who have done so much already, will, under the direction of those who are leading you, do even greater things in the future. I am very proud of what you have done. I know that you have made considerable sacrifices (not greater than the Communists have made for their objective), but I give you credit for all that you have done, and I have great hopes that you will do even better things in the future.

“I am glad to know that your members are increasing — not rapidly, but with continued progress. There is no falling off. Though the progress may be slow, still it is sure and stable, and you have, needless for me to say, much work to do if you are going to Christianise Australia.

“We are in a very sad plight at the present time. There is very little Christianity in Australia. There is very little goodness in the world. We are, perhaps, too strong in our pronouncements on the wickedness of the world. There is some goodness, but it is mostly humanitarianism. It is not Christianity and it is for you to try and make any goodness there is in the Australian world — not merely humanitarian, but real Christianity. You are going to succeed if you will put your shoulders to the wheel and keep at it. Do not be afraid because you are not making rapid progress—even though things go awry or amiss, and something on which you have great hones turns out to be a failure. We must have failures if we are to succeed. Of course, we here in Australia are not the only people fighting this battle for Christ. Europe is even in a much worse condition than Australia. I don’t know that any part of Europe is more pagan than Australia, but they have many difficulties there from which we are free. Nobody rpq]icps that and the sad state of Europe better than the Holy Father, and he is looking out over Europe and honing that Catholics will do their duty. The Pope was reported recently to have said, in hi= address to the Catholic Young Women’s Federation in Rome, regarding the grave situation in Europe: ‘Abstention from active work for God and for Christ in the present conditions in Europe, you all know full well is in itself a grave sin of omission.’

“These are very strong words coming from the Pone, dealing with a situation like our own. We have substantially and practically the very same pagan atmosphere to fight, and the very same problems to solve, and I have no doubt if the Pope were standing here, he would say the very same thing to you. He would say that seeing the problems that Australia now has to face; seeing the menace of paganism and Communism,* that the man or the woman. who stands aside and fail£ to do his or her duty to shoulder his or her responsibility, is guilty of a grave omission. I am sure you will take that to heart.

“All you wanted was a lead, and very likely you have every justification for blaming your leaders. If you like you can blame the Bishops of Australia. Perhaps the call was not sufficiently urgent; perhaps the call was not eloquently supported. At all events, you can blame anyone you like—me especially—but we must now face the facts as we find them. We are face to face with atheistic Communism in Australia, and what happened elsewhere can happen here; unless we do our best, Communistic atheism will gain a victory, and it may be a losing victory, in Australia.

“You have wise leadership. I am glad to hear from your leaders that you are prepared to co-operate with them so zealously. If you get the lead, you are prepared to follow. Leaders or followers, the one thing that we must always remember is that unless the Lord bless them that labour, they labour in vain. We have to put all our confidence in God. We must try and make our own lives good Christian lives before we can make Christians of those around us. Try and make ourselves real, genuine Christians, not afraid to stand up for our Faith and follow Christ.

His Grace Archbishop Mannix carrying the Blessed Sacrament . in the procession through the Cathedral grounds at the close of the Forty Hours’ devotion, Sunday, October 5.