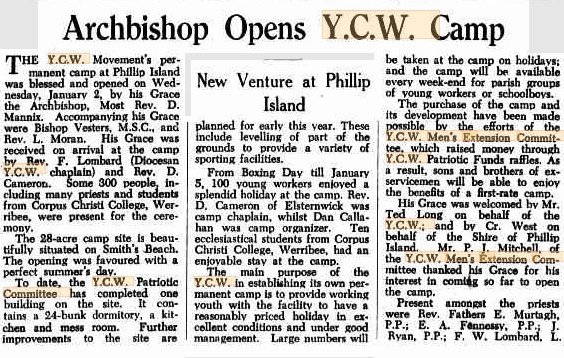 HE Y.C;W. Movement’s permanent camp at Phillip Island T was blessed and opened on Wednesday, January 2, by his Grace the Archbishop, Most Rev. D. Mannix. Accompanying his Grace were Bishop Vesters, M.S.G., and Rev. L. Moran. His Grace was received on arrival at the camp by Rev. F. Lombard (Diocesan Y.C.W. chaplain) and Rev. D. Cameron. Some 300 people, , including many priests and students from Corpus Christi College, Werribee, were present for the ceremony. The 28-acre camp site is beautifully situated on Smith’s JBeach. The opening was favoured with a perfect summer’s day. To date, the Y.C.W. Patriotic Committee has completed one building on the site. It contains a 24-bunk dormitory, a kitchen and mess room. Further improvements to the site are

planned for early this year. These include levelling of part of the grounds to provide a variety of sporting facilities. From Boxing Day till January 5, 100 young workers enjoyed a splendid holiday at the camp. Rev. D. Cameron of Elsternwick was camp chaplain, whilst Dan Callahan was camp organizer. Ten ecclesiastical students from Corpus Christi College, Werribee, had an enjoyable stay at the camp. The main purpose of the Y.C.W. in establishing its own permanent camp is to provide working youth with the facility to have a reasonably priced holiday in excellent conditions and under good management. Large numbers will

be taken at the camp on holidays; and the camp will be available every week-end for parish groups of young workers or schoolboys. The purchase of the camp and its development have been made possible by the efforts of the Y.C.W. Men’s Extension Committee, which raised money through Y.C.W. Patriotic Funds raffles. As a result, sons and brothers of exservicemen will be able to enjoy the benefits of a first-rate camp. His Grace was welcomed by Mr. Ted Long on behalf of the Y.C.W.; and by Cr. West on behalf of the Shire of Phillip Island. Mr. P. J. Mitchell, of the Y.C.W. Men’s Extension Committee thanked his Grace for his interest in coming so far to open the camp. Present amongst the priests were Rev. Fathers E. Murtagh, P.P.; E. A. F6nnessy, P.P.; J. Ryan, P.P.; F. W. Lombard, L.

Moran, D. Cameron, J. O’Keefe, J. F. Kelly, V. Arthur, K. Ryan, T. Brophy, J. O’Shea, J. Spillane, L. Ryan, F. Larsen and Dr. H. Jordan, M.S.C. ARCHBISHOP’S ADDRESS His Grace the Archbishop in opening and blessing the camp, said that he had heard about the pimp project and knew that building had commenced but had no idea that so much progress had been made. Great work had already been done in developing the beautiful site. His Grace said that it was a pleasure for him to open yet another Y.C.W. venture. The camp was, of course, only one aspect of the work of the Young Christian Workers, which in its 10 years’ existence had done so much for the youth of Australia. He was confident that the camp, like other Y.C.W. ventures, would succeed. The camp should do much good in the years to come in providing recreation for youth. Young men could come to the camp and enjoy the simple life—about which we heard so much and few seemed to practise. The camp was a credit to the Y.C.W. and to Father Lombard’s initiative and vision. His Grace congratulated Father Lombard and thanked him for all he had done for the Y.C.W. in Melbourne and throughout Australia. Thanks were due also, his Grace said, to all who were associated with Father Lombard in the work. The Y.C.W. was fortunate in having helpers who remained constant. The object of the Y.C.W. was the lifting of morale among youth. While other people talked vaguely about morale the Y.C.W. had done something practical about it and had already achieved a great deal. If we were to improve morale each one had a responsibility to be land to others, patient, sober, honest and develop all die virtues. The Y.C.W. was helping to do this and to influence others and in this way was trying to change the environment for youth. God had His way of saving the world, but He would not give us victory without our co-operation. The following donations were received” during the day: £10/10/-, Mrs. K. House; £10, Mr. T. Mooney; £7/7/-, Mrs. P. O’Loughlin; £5/5/-, Rev. J. O’Keefe, Rev. J. L. Ryan, Mr. D. M. Lombard; £5, Mrs. Clarke, “Anonymous”; £2, Mrs. McCann; £1/1/-, Cr. West, Mr. D. Mc-Adie, Mrs. Larsen, Mrs. E. Owens, Mr. C. J. Corrigan, Miss Berger, Miss N. Fairbanks; £1, Mr. K. McCann, Mr. Thornton Smith; 10/-, Mr. R. Myler, Mrs. Allen, Mr. Shields, Mrs. Ryan, Misses E. and P. Kelly, Mr.Stppa, “Anonymous” (two).