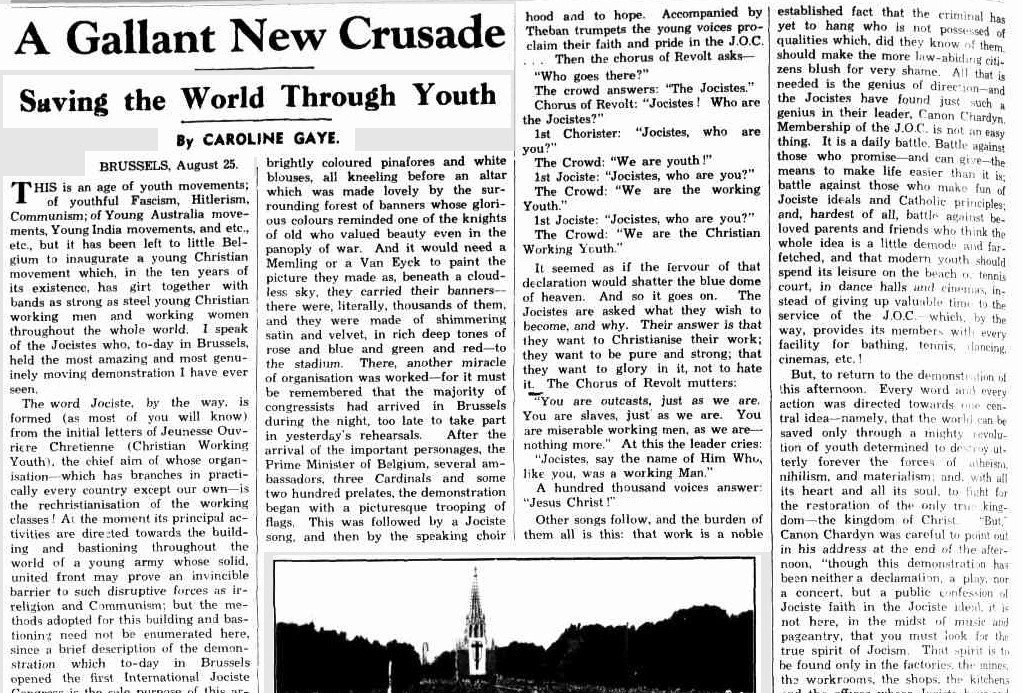 Saving the World Through Youth

THIS is an age of youth movements; of youthful Fascism, Hitlerism, Communism; of Young Australia, movements, Young India movements, and etc., etc., but it has been left to little Belgium to inaugurate a young Christian movement which, in the ten years of its existence, has girt together with bands as strong as steel young Christian working men and working women throughout the whole world. I speak of the Jocistes who, to-day in Brussels, held the most amazing and most genuinely moving demonstration I have ever seen.

The word Jociste, by the way, is formed (as most of you will know) from the initial letters of Jeunesse Ouvriere Chretienne (Christian Working Youth), the chief aim of whose organisation—which has branches in practically every country except our own—is the rechristianisation of the working classes ! At the moment its principal activities are directed towards the building and bastioning throughout the world of a young army whose solid, united front may prove an invincible barrier to such disruptive forces as irreligion and Communism; but the methods adopted for this building and bastioning need not be enumerated here, since a brief description of the demonstration which to-day in Brussels opened the first International Jociste Congress is the sole purpose of this article.

This Congress of Youth, or rather the inauguration of this Congress, recalls in more ways than one the age of chivalry —and paiticularly the chivalry of the Crusades, for the members of the J;O.C. may, in every sense of the word, be said to be Crusaders. . . . Here is a well-known picture which most of you will remember—it stirred my imagination When I was very young, and, probably, stirred yours, too—in which a young squire, on the eve of receiving his knighthood, keeps watch all night before the altar upon which his armour is laid. It was a common practice in those days for earnest young squires, before being knighted, to keep this Viellee d’Armes. . . . Last night in the churches of Belgium just such a vigil was kept, and, hour after hour, young Jocistes took it in turn to mount guard before the Blessed Sacrament. Outside the quiet churches very different preparations were going on. All through the night trains hurried in and out of Brussels, two huge stations, depositing their seemingly endless cargoes of young working men from England, Holland, Spain, from Canada, Portugal, Switzerland, India, Africa, France. From France, at half-past five in the morning arrived a contingent of 1300 youngsters who marched straight off to the Church of Notre Dame de la Chapelle, where the Cardinal Archbishop of Paris was waiting to say Mass for them!

Not the least part of this day’s celebrations, by the way, has been the smooth organisation of colossal crowds. One hundred thousand Jocistes arrived in Brussels, and Brussels was hardly aware of the fact. Every single one was comfortably accommodated, and everyone knew exactly what was expected of him (or her). This morning, in their various groups, they attended early Mass, received Holy Communion, and, subsequently, found breakfast prepared in nearby schools and clubs. Afterwards, valiant and young and proud, they marched to the wooded heights of Laecken, where, beneath the towering monument of Leopold I., Cardinal Van Roey celebrated High Mass. Immediately after High Mass, the congressists, together with their families and their friends (whose numbers nobody even attempted to guess) had their luncheon on the great Plain of Laecken. That pleasant ceremony over, they marched to the Heysel Stadium, where their picturesque and moving demon stratum was to begin at half-past two.

It would need a poet to describe the effect created by those hundred thousand young men wearing, according to their groups, different coloured shirts, and the ten thousand young women in brightly coloured pinafores and white blouses, all kneeling before an altar which was made lovely by the surrounding forest of banners whose glorious colours reminded one of the knights of old who valued beauty even in the panoply of war. And it would need a Memling or a Van Eyck to paint the picture they made as, beneath a cloudless sky, they carried their banners there were, literally, thousands of them, and they were made of shimmering satin and velvet, in rich deep tones of rose and blue and green and red—to the stadium. There, another miracle of organisation was worked—for it must be remembered that the majority of congressists had arrived in Brussels during the night, too late to take part in yesterday’s rehearsals. After the arrival of the important personages, the Prime Minister of Belgium, several ambassadors, three Cardinals and some two hundred prelates, the demonstration began with a picturesque trooping of flags. This was followed by a Jociste song, and then by the speaking choir which proclaimed the aims and ideals of Jocism.

A rostrum was erected in the centre of the arena, and there the two leaders of the choir—one speaking Flemish, the other French—directed the proceedings. They were surrounded by some five hundred trained youths, who all the time accompanied the choir with appropriate actions, whilst on the surrounding benches sat massed Jocistes from every land, adding the thunder of their voices to this mighty profession of faith.

“THE CHORUS OF REVOLT.”

I shall quote only a few extracts to give you some idea (if possible) of the spoken songs which, for close on three hours, held that huge audience spellbound. . . . One is called the Chorus of Revolt. It begins in Flemish:

Those two lines need no translation, but the ones which follow bear little resemblance to our own language, so I must give my own rough translation of the Frencli version:

“Pitiless masters burden us with work.”

“We break beneath its weight.”

“We die beneath its weight.”

1st Chorister: “Workers we are, not slaves.”

1st Chorister: “Our backs are breaking.”

1st Chorister: “We dare not lift our eyes.”

1st Chorister: “We are outcasts. We are pariahs. We are the cogs in a merciless machine.”

Choir: “We are finished with. life. We have had enough of life. Life has beaten us,” . . . and so on. This lament is then followed by the Jociste’ challenge to liberty, to manhood and to hope. Accompanied by Theban trumpets the young voices proclaim their faith and pride in the J.O.C. Then the chorus of Revolt asks—

The crowd answers: “The Jocistes.”

1st Chorister: “Jocistes, who are you?”

The Crowd: “We are the Christian Working Youth.”

It seemed as if the fervour of that declaration would shatter the blue dome of heaven. And so it goes on. The Jocistes are asked what they wish to become, and why. Their answer is that they want to Christianise their work; they want to be pure and strong; that they want to glory in it, not to hate it. The Chorus of Revolt mutters:

“Jocistes, say the name of Him Who, like you, was a working Man.”

Other songs follow, and the burden of them all is this: that work is a noble and creative thing, a thing into which the Jocistes must put their whole hearts and their whole strength in order to support their families, to bring prosperity to their country, and to win back the world to Christ. That statement, of whose truth the Jocistes are utterly convinced, is no idle boast. Less than ten years ago they numbered a paltry few hundreds ardent young Belgians struggling against what, even to them, must have seemed insuperable obstacles, but determined to answer generously (quixotically, it seemed to their critics) the Holy Father’s call to Catholic Action— and to-day one-tenth of a million representatives (mark you!) from every nation bear eloquent testimony of health and strength and powerful growth. There must be something magnetic about self-sacrifice. There must, I think, be something pretty big and splendid deep down beneath “our tainted nature” that responds to the call to immolate itself—when the call is properly made! In every human being there must be a strong urge to do grand things and good things, for it is a well-established fact that the criminal has yet to hang who is not possessed of qualities which, did they know of them should make the more law-abiding citizens blush for very shame. All that is needed is the genius of direction-and the Jocistes have found just such a genius in their leader, Canon Chardyn Membership of the J.O.C. is not an easy thing. It is a daily battle. Battle against those who promise—and can give—the means to make life easier than it i s-battle against those who make fun of Jociste ideals and Catholic principles and, hardest of all, battle against beloved parents and friends who think the whole idea is a little demode and farfetched, and that modern youth should spend its leisure on the beach or tennis court, in dance halls and cinemas, instead of giving up valuable time to the service of the J.O.C.—which, by the way, provides its members with every facility for bathing, tennis, dancing, cinemas, etc.!

But, to return to the demonstration of this afternoon. Every word and every action was directed towards one central idea—namely, that the world can be saved only through a mighty revolution of youth determined to destroy utterly forever the forces of atheism, nihilism, and materialism; and, with all its heart and all its soul, to fight for the restoration of the only true kingdom—the kingdom of Christ. “But,” Canon Chardyn was careful to point out in his address at the end of the afternoon, “though this demonstration has been neither a declamation, a play, nor a concert, but a public confession of Jociste faith in the Jociste ideal, it is not here, in the midst of music and pageantry, that you must look for the true spirit of Jocism. That spirit is to be found only in the factories, the mines, ths workrooms, the shops, the kitchens and the offices where Jociste boys and Jociste girls live night and day the hard and hidden realisation of their great crusade.”

Then the Canon endsd his address with these words:

“You have shown to-day that in the whole world there is but one J.O.C., and that it knows no such thin – ; as hatred, violence, egoism, or jealousy. It has but one moving force—unselfish love for all young labourers and for all mankind irrespactive of class, race, or country. To all wars and threats of war, the J.O.C. will oppose its unshakeable determination for peace, the only true peace, which is the peace of Jesus Christ. . . . Jocistes, I send you forth now to your homes, to your workshops, to your various countries with only one command, one watchword—

“Conquest of your comrades.

“Conquest of your workshops.

“Conquest of your families, to-day and to-morrow.

“Jocistes, be the glory of the Church, be the honour of your country, be the hope of your age. … I give you my blessing!

No comment is necessary. To all those who have eyes to see, it must be clear as day that Jocism is a lively and constructive thing, and all those who are not blinded by prejudice must agree that it is not only a finer and more noble thing than Communism, its arch enemy—but a more natural, more friendly, and infinitely happier solution to this world’s troubles. In short, it is a daring and audacious attempt t» establish Christianity—as the Founder of Christianity meant that it should be!

Pray heaven it may succeed.

THE HIGH MASS IN THE OPEN AIR IN THE PARK OF LAECKEN. NOTICE THE VASTCONGREGATION OF YOUTH.