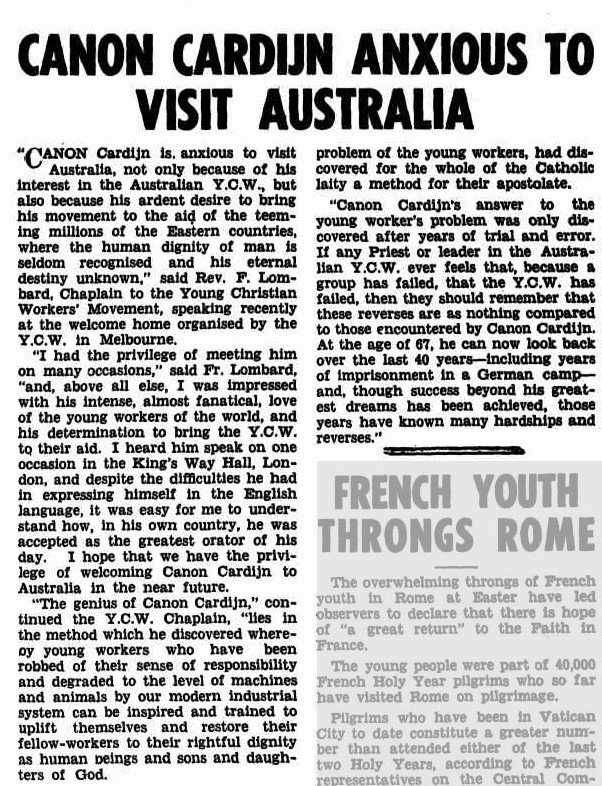 “CANON Cardijn is. anxious to visit Australia, not only because of his interest in the Australian Y.C.W., but also because his ardent desire to bring his movement to the aid of the teeming millions of the Eastern countries, where the human dignity of man is seldom recognised and his eternal destiny unknown,” said Rev. F. Lombard, Chaplain to the Young Christian Workers’ Movement, speaking recently at the welcome home organised by the Y.C.W. in Melbourne.

“I had the privilege of meeting him on many occasions,” said Fr. Lombard, “and, above all else, I was impressed with his intense, almost fanatical, love of the young workers of the world, and his determination to bring the Y.C.W. tq their aid. I heard him speak on one occasion in the King’s Way Hall, London, and despite the difficulties he had in expressing himself in the English language, it was easy for me to understand how, in his own country, he was accepted as the greatest orator of his day. I hope that we have the privilege of welcoming Canon Cardijn to Australia in the near future.

“The genius of Canon Cardijn,” continued the Y.C.W. Chaplain, “lies in the method which he discovered whereby young workers who have been robbed of their sense of responsibility and degraded to the level of machines and animals by our modern industrial system can be inspired and trained to uplift themselves and restore their fellow-workers to their rightful dignity as human beings and sons and daughters of God.

“This method of formation and training of leaders is not theoretical, for the young worker is trained in a practical manner out of life and in life. The problem of the young worker is discovered, is examined, and a solution sought, and then, finally, action.

“When Canon Cardijn established the Y.C.W., he had no thought of Catholic Action, yet when he visited the late Pope Pius XI the Holy Father said the work of the Y.C.W. is Catholic Action in practice. ‘Thank God, at last someone has come to speak to me about the masses of working class.’ Cardijn, therefore, in answering the problem of the young workers, had discovered for the whole of the Catholic laity a method for their apostolate.

“Canon Cardijn’s answer to the young worker’s problem was only discovered after years of trial and error. If any Priest or leader in the Australian Y.C.W. ever feels that, because a group has failed, that the Y.C.W. has failed, then they should remember that these reverses are as nothing compared to those encountered by Canon Cardijn. At the age of 67, he can now look back over the last 40 years—including years of imprisonment in a German camp— and, though success beyond his greatest dreams has been achieved, those years have known many hardships and reverses.”