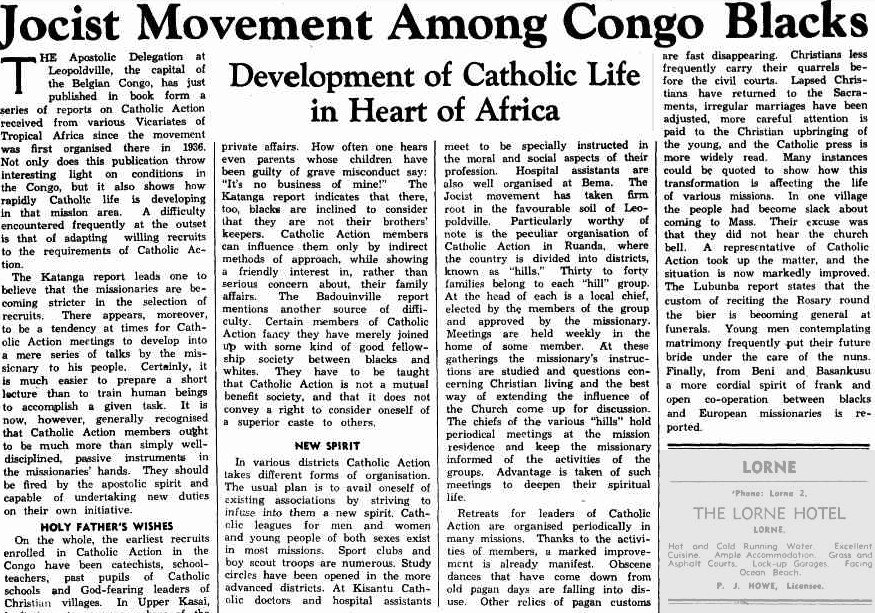 Development of Catholic Life in Heart of Africa

THE Apostolic Delegation at Leopoldville, the capital of the Belgian Congo, has just published in book form a series of reports on Catholic Action received from various Vicariates of Tropical Africa since the movement was first organised there in 1936. Not only does this publication throw interesting light on conditions in the Congo, but it also shows how rapidly Catholic life is developing in that mission area. A difficulty encountered frequently at the outset is that of adapting willing recruits to .the requirements of Catholic Action.

The Katanga report leads one to believe that the missionaries are becoming stricter in the selection of recruits. There appears, moreover, to, be a tendency at times for Catholic Action meetings to develop into a mere series of talks by the missionary to his people. Certainly, it is much easier to prepare a short lecture” than to train human beings to accomjplish a given task. It is now, however, generally recognised that Catholic Action members ought to be much more than simply welldisciplined, passive instruments in the missionaries’ hands. They should be fired by the apostolic spirit and capable of undertaking new duties on their own initiative.

On the whole, the earliest recruits enrolled in Catholic Action in the Congo have been catechists, schoolteachers, past pupils of Catholic schools and God-fearing leaders of. Christian villages. In Upper Kasai, invitations to many members of the community were the first step taken by the missionaries. Pleased with this attention, many of them have since attended the meetings regularly. States the Baudoinville report: “More than anything else, the knowledge of the Holy Father’s wishes in this regard and the hope of being able to do something towards strengthening and extending Christ’s Kingdom in Africa have spurred the blacks to join in the Catholic Action movement.”

Besides the usual difficulties besetting the path of every new organisation in its earliest stages, there are others resulting from local conditions. The blacks here, says the report, still think they have no right to obtrude themselves into others’ private affairs. . How often one hears even parents whose children have been guilty of grave misconduct say: “It’s no business of mine!” The Katanga report indicates that there, too, blacks are inclined to consider that they are not their brothers’ keepers. Catholic Action members can influence them only by indirect methods of approach, while showing a friendly interest in, rather than serious concern about, their family affairs. The Baudoinville report mentions another source of difficulty. Certain members of Catholic Action fancy they have merely joined up with some kind of good fellowship society between blacks and whites. They have to be taught that Catholic Action is not a mutual benefit society, and that it does not convey a right to consider oneself of a superior caste to others.

In various districts Catholic Action takes different forms of organisation. The usual plan is to avail oneself of existing associations by striving to infuse into them a new spirit. Catholic leagues for men and women and young people of both sexes exist in most missions. Sport clubs and boy scout troops are numerous. Study circles have been opened in the more advanced districts. At Kisantu Catholic doctors and hospital assistants meet to be specially instructed in the moral and social aspects of their profession. Hospital assistants are also well organised at Bema. The Jocist movement has taken firm root in the favourable soil of Leopoldville. Particularly worthy of note is the peculiar organisation of Catholic Action in Ruanda, where the country is divided into districts, known as “hills.” Thirty to forty families belong to each “hill” group. At the head of each is a local chief, elected by the members of the group and approved by the missionary. Meetings are held weekly in the home of some member. At these gatherings the missionary’s instructions are studied and questions concerning Christian living and the best way of extending the influence of the Church come up for discussion. The chiefs of the various “hills” hold periodical meetings at the mission residence and keep the missionary informed of the activities of the groups. Advantage is taken of such meetings to deepen their spiritual life.

Retreats for leaders of Catholic Action are organised periodically in many missions. Thanks to the activities of members, a marked improvement is already manifest. Obscene dances that have come down from old pagan days are falling into disuse. Other relics of pagan customs are fast disappearing. Christians less frequently carry their quarrels before the civil courts. Lapsed Christians have returned to the Sacraments, irregular marriages have been adjusted, more careful attention is paid to the Christian upbringing of the young, and the Catholic press is more widely read. Many instances could be quoted to show how this transformation is affecting the life of various missions. In one village the people had become slack about coming to Mass. Their excuse was that they did not hear the church bell. A representative of Catholic Action took up the matter, and the situation is now markedly improved. The Lubunba report states that the custom of reciting the Rosary round the bier is becoming general at funerals. Young men contemplating matrimony frequently -put their future bride under the care of the nuns. Finally, from Beni and. Basankusu a more cordial spirit of frank and open co-operation between blacks and European missionaries is reported.