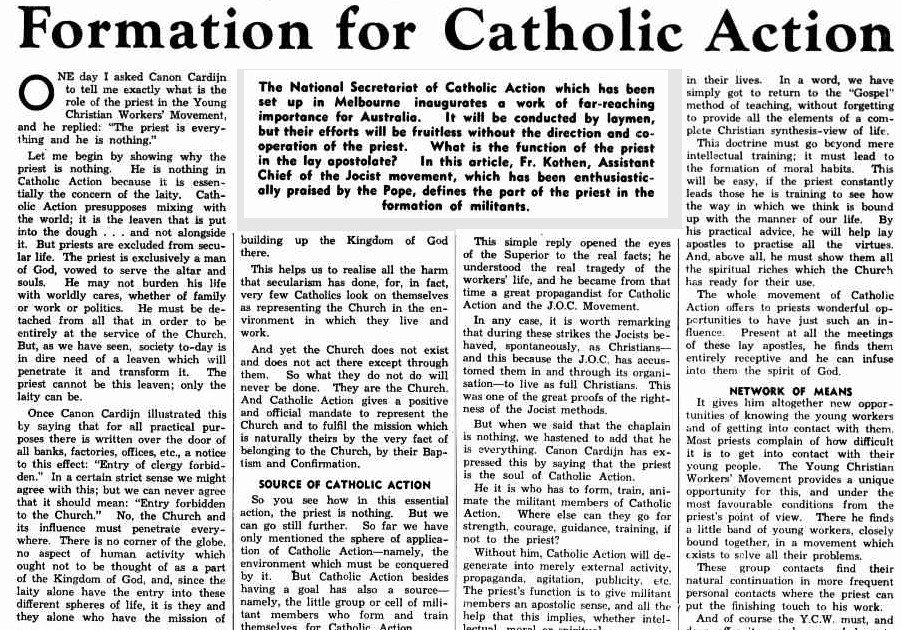 The National Secretariat of Catholic Action which has been set up in Melbourne inaugurates a work of far-reaching importance for Australia. It will be conducted by laymen, but their efforts will be fruitless without the direction and cooperation of the priest. What is the function of the priest in the lay apostolate? In this article, Fr. Kothen, Assistant Chief of the Jocist movement, which has been enthusiastically praised by the Pope, defines the part of the priest in the formation of militants.

ONE day I asked Canon Cardijn to tell me exactly what is the role of the priest in the Young Christian Workers’ Movement, and he replied: “The priest is everything and he is nothing.” Let me begin by showing why the priest is nothing. He is nothing in Catholic Action because it is essentially the concern of the laity. Catholic Action presupposes mixing with the world; it is the leaven that is put into the dough . . . and not alongside it. But priests are excluded from secular life. The priest is exclusively a man of God, vowed to serve the altar and souls. He may not burden his life with worldly cares, whether of family or work or politics. He must be detached from all that in order to be entirely at the service of the Church. But, as we have seen, society to-day is in dire need of a leaven which will penetrate it and transform it. The priest cannot be this leaven; only the laity can be.

Once Canon Cardijn illustrated this by saying that for all practical purposes there is written over the door of all banks, factories, offices, etc., a notice to this effect: “Entry of clergy forbidden.” In a certain strict sense we might agree with this; but we can never agree that it should mean: “Entry forbidden to the Church.” No, the Church and its influence must penetrate everywhere. There is no corner of the globe, no aspect of human activity which ought not to be thought of as a part of the Kingdom of God, and, since the laity alone have the entry into these different spheres of life, it is they and they alone who have the mission of building up the Kingdom of God there.

This helps us to realise all the harm that secularism has done, for, in fact, very few Catholics look on themselves as representing the Church in the environment in which they live and work.

And yet the Church does not exist and does not act there except through them. So what they do not do will never be done. They are the Church. And Catholic Action gives a positive and official mandate to represent the Church and to fulfil the mission which is naturally theirs by the very fact of belonging to the Church, by their Baptism and Confirmation.

So you see how in this essential action, the priest is nothing. But we can go still further. So far we have only mentioned the sphere of application of Catholic Action—namely, the environment which must be conquered by it. But Catholic Action besides having a goal has also a source— namely, the little group or cell of militant members who form and train themselves for Catholic Action.

In this connection we must see things as they really are, we must be realists. We ask the laity to play a part of foremost importance in secular life. They have got to be capable of taking the initiative, responsibility, authority—in a word, they must have all the virtues. But you must know that all these qualities are not going to be acquired suddenly at the moment when, for example, the young worker crosses the threshold of the factory. He must already possess these virtues and qualities before he enters; he must acquire them outside the factory; which means, he must gain them in the Catholic Action cell.

So the Catholic Action cell must resemble secular society in this respect; the layman must hold the same place in both cases; that means, he must occupy the whole place, and in consequence no place is left for the priest . . . since all the places are occupied!

If you want the proof of how important and true this is, just look at the societies and good works all round you; they are innumerable, of all kinds; they have worked wonders, they have spread charity, sanctified their members, converted individuals . . . but not one has formed and trained militant members capable of transforming the environment in which they live and work . . . and for the very simple reason that they are run by the priest.

He presides, controls, acts; the laity listen, obey, do’his commands. Having been passive at the meeting, they remain passive in the field of the apostolate. In a word, this is not Catholic Action.

I can tell you of an’ outstanding case that explains what I mean. A great French ecclesiastic, a foremost theological authority, had never allowed his priests to take part in the social movement nor in Catholic Action. He was against all new forms of action. The workers in particular had but to obey; that is their religious vocation. And then, in June, 1936, the whole of France was shaken by strikes: stay-in strikes, violent methods, a whole revolutionary technique. The Jocists were drawn willy-nilly into the strikes.

One of their chaplains went to see the great ecclesiastic to consult him on the very grave cases of conscience that arose for them. He replied that the matter was very complex, and he would need several days of reflection before judging. Whereupon the priest replied that the lads, carried along by the commotion, had not five minutes in which to reflect; they had to decide there and then.

This simple reply opened the eyes of the Superior to the real facts; he understood the real tragedy of the workers’ life, and he became from that time a great propagandist for Catholic Action and the J.O.C. Movement.

In any case, it is worth remarking that during these strikes the Jocists behaved, spontaneously, as Christians— and this because the J.O.C. has accustomed them in and through its organisation—to live as full Christians. This was one of the great proofs of the Tightness of the Jocist methods.

But when we said that the chaplain is nothing, we hastened to add that he is everything. Canon Cardijn has expressed this by saying that the priest is the soul of Catholic Action.

He it is who has to form, train, animate the militant members of Catholic Action. Where else can they go for strength, courage, guidance, training, if not to the priest?

Without him, Catholic Action will degenerate into merely external activity, propaganda, agitation, publicity, etc. The priest’s function is to give militant members an apostolic sense, and all the help that this implies, whether intellectual, moral or spiritual.

It would be impossible to over-insist, on the need for the doctrinal formation of members of Catholic Action. Spiritual and religious truths are so unknown and neglected to-day. If the working masses could but begin to suspect the wealth hidden in Christian truth, what prejudices would disappear, and how they would come back to Our Lord!

Therefore, our first and most urgent task is to instruct. But this will only succeed if done in a living manner. Abstract doctrine, ready-made, stereotyped formulas are no good for forming militant members. With them we will get no further.

What is essential is to express and explain Christian truth so that they can understand it, in their own language, so that it really gets anchored in their lives. In a word, we have simply got to return to the “Gospel” method of teaching, without forgetting to provide all the elements of a complete Christian synthesis-view of life.

This doctrine must go beyond mere intellectual training; it must lead to the formation of moral habits. This will be easy, if the priest constantly leads those he is training to see how the way in which we think is bound up with the manner of our life. By his practical advice, he will help lay apostles to practise all the virtues. And, above all, he must show them all the spiritual riches which the Church has ready for their use.

The whole movement of Catholic Action offers to priests wonderful opportunities to have just such an influence. Present at all the meetings of these lay apostles, he finds them entirely receptive and he can infuse into them the spirit of God.

It gives him altogether new opportunities of knowing the young workers and of getting into contact with them. Most priests complain of how difficult it is to get into contact with their young people. The Young Christian Workers’ Movement provides a unique opportunity for this, and under the most favourable conditions from the priest’s point of view. There he finds a little band of young workers, closely bound together, in a movement which exists to solve all their problems.

These group contacts find their natural continuation in more frequent personal contacts where the priest can put the finishing touch to his work.

And of course the Y.C.W. must, and does, offer its members a whole network of purely religious means which continue and perfect the formation of its members: retreats, participation in the Liturgy, and a general religious programme; all of which the chaplain can make use of in the work of formation, education and sanctification.

And we can add that such a movement allows the priest to reserve himself exclusively for his priestly functions, leaving to the laity the care for temporal things. In a word, persons and things find again their true place. No doubt, the chaplain’s task is delicate. It calls for the exercise of all manner of virtues. But it is of an importance and bears fruit beyond anything we can imagine. In Belgium, our chaplains all agree that through the J.O.C. not only have they understood the meaning of Catholic Action, but they have even gained new light on the meaning of their own priesthood.