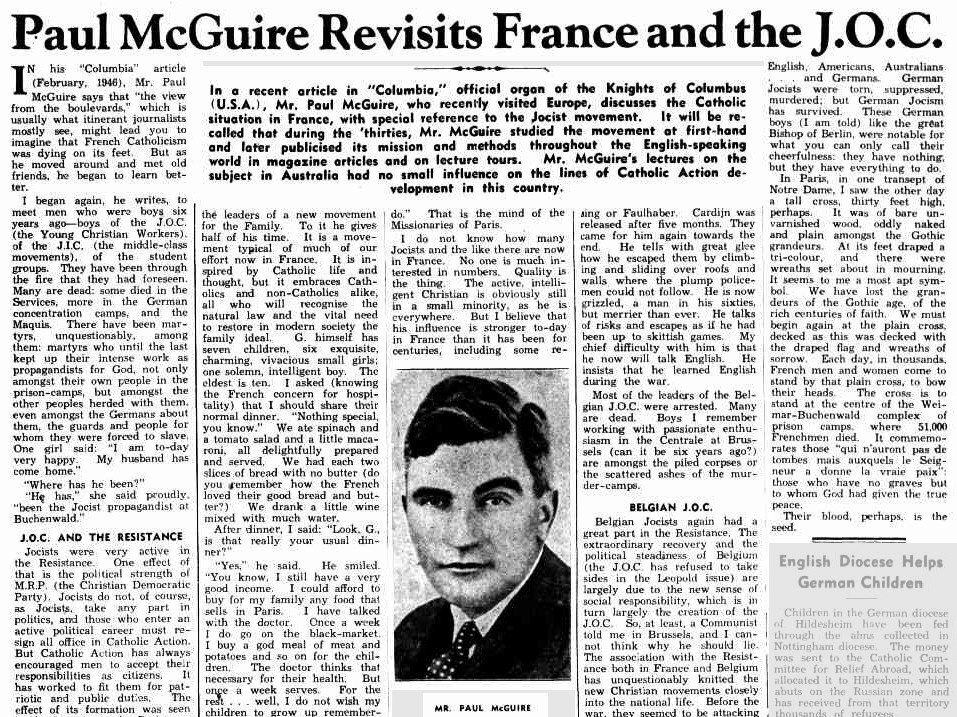 In a recent article in “Columbia/’ official organ of the Knights of Columbus (U.S.A.), Mr. Paul McGuire, who recently visited Europe, discusses the Catholic situation in France, with special reference to the jocist movement. It will be recalled that during the ‘thirties, Mr. McGuire studied the movement at first-hand and later publicised its mission and methods throughout the English-speaking world in magazine articles and on lecture tours. Mr. McGuire’s lectures on the subject in Australia had no small influence on the lines of Catholic Action development in this country.

IN his “Columbia” article (February, 1946), Mr. Paul McGuire says that “the view from the boulevards,” which is usually what itinerant journalists mostly see, might lead you to imagine that French Catholicism was dying on its feet. But as he moved around and met old friends, he began to learn better.

I began again, he writes, to meet men who were boys, six years ago—boys of the J.O.C. (the Young Christian Workers), of the J.I.C. (the middle-class movements), of the student groups. They have been through the fire that they had foreseen. Many are dead: some died in the Services, more in the German concentration camps, and the Maquis. There have been martyrs, unquestionably, among them: martyrs who until the last kept up their intense work as propagandists for God, not only amongst their own people in the prison-camps, but amongst the other peoples herded with them, even amongst the Germans about them, the guards and people for whom they were forced to slave. One girl said:, “I am to-day very happy. My husband has come home.”

“Where has he been?”

“He has,” she said proudly, “been the Jocist propagandist at Buchenwald.”

J.O.C. AND THE RESISTANCE

Jocists were very active in the Resistance. One effect of that is the political strength of M.R.P. (the Christian Democratic Party). Jocists, do not, of course, as Jocists, take any part in politics, and those who enter an active political career must resign all office in Catholic Action. But Catholic Action has always encouraged men to accept their responsibilities as citizens. It has worked to fit them for patriotic and public duties. The effect of its formation was seen in the Maquis, in the Resistance generally, and now in politics. Remember that all who have been Jocists are still young, for the movement is still young. But there are many ex-Jocists in the French Assembly to-day.

People will tell you that France is broken. I have had it from many Frenchmen: “Something in France has snapped.” It is again, I think, the view from the boulevards, where you will pay 1500 francs for a blackmarket meal if you are so foolish and so ready to contribute to the racket.

People will tell you that France is slow to recover. It is true. France was stripped for years of much of her resources and a large part of her active manpower. The men from forced labour in Germany or the prison camps came back slowly, and many were worn out. Malnutrition and ill-treatment had exhausted their energies. The tuberculosis rate amongst them was frightful. The wonder is not that France recovers slowly but that she recovers at all. And France must not be judged from Paris. The most notorious features of Paris (and the ones in which too many visitors find most attractions) have in all my memory been much the business of cosmopolitan aliens largely catering for aliens, tourists and the like. But for the first time in many decades the “maisons de tolerance” were slammed shut the other day by the de Gaulle Government. There are some Frenchmen, now in power, determined that their, capital will not be chiefly known as an international bawdy-house and peepshow. This represents not only reviving moral conscience, but a new pride in France. One ex-Jocist politician said to me: “Half the moral rot in France, the black-marketing, the fifthcolumnism, the political corruption, came from the vice-rings. The underworld of Paris became an underworld of all France. We are going to break it.”

The black-market is widespread. Who casts the first stone? There is actually much more reason and excuse for black-markets in the confused, desperate, poverty-stricken conditions of France than there can be in happier countries.

I went to dine with my friend, G., who is an able, prosperous business man. He is also one of the leaders of a new movement for the Family. To it he gives half of his time. It is a movement typical of much of our effort now in France. It is inspired by Catholic life -and thought, but it embraces Catholics and non-Catholics alike, all who will recognise the natural law and the vital need to restore in modern society the family ideal. G. himself has seven children, six exquisite, charming, vivacious small girls; one solemn, intelligent boy. The eldest is ten. I asked (knowing the French concern for hospitality) that I should share their normal dinner. “Nothing special, you know.” We ate spinach and a tomato salad and a little macaroni, all delightfully prepared and served. We had each two slices of bread with no butter (do you ^remember how the French loved their good bread and butter?) We drank a little wine mixed with much water.

After dinner, I said: “Look, G., is that really your usual dinner?”

“Yes,” he said. He smiled. “You know, I still have a very good income. I could afford to buy for my family any food that sells in Paris. I have talked with the doctor. Once a week do go on the black-market. I buy a god meal of meat and potatoes and’ so on for the children. The doctor thinks that necessary for their health. But or^e a week serves. For the rest . . . well, I do not wish my children to grow up remembering that they lived well from the black-market while France went hungry.”

G. is, I believe, representative of much in France that itinerant journalists often miss.

There is another Catholic movement of the Family sprung from the pre-war League of Christian Workers. It is doing remarkable work amongst the poor. Associated with it are the Missionaries of Paris: small cells “parachute,” as they say, into the poorest districts, the “red belts.” The missionaries are priests who work in factories and with the poor. They live in the cheapest lodgings. Before work and often in their own rooms and lodging houses they say Mass. Their lay fellows join with them each morning. They .are treating the modern situation as it must be treated, as a field for missionary activity, for penetration. The other day Cardinal von Preysing said to me in Berlin: “I consider our Christian position excellent. We are precisely in the state of the early Christians. We have nothing. We have everything to do.” That is the mind of the Missionaries of Paris. I do not know how many Jocists and the like there are now in France. No one is much interested in numbers. Quality is the thing. The active, intelligent Christian is obviously still in a small minority, as he is everywhere. But I believe that his influence is stronger to-day in France than it has been for centuries, including some reputedly Christian. For the Catholic to-day in France knows why he is a Catholic; what it means to be a Catholic. He is active; he has impact on his world. I don’t attach too much importance to political phenomenon except as symptoms of the deeper moral movements of society, and I think that all “Christian” or “Catholic” parties should be regarded with salutary scepticism. But the rise of the M.R.P. is (in part at least) an interesting political evidence of what I believe a moral movement deep in the soul of France.

I went from France into Belgium, to Canon Cardijn, the founder of the J.O.C. He was arrested as a young priest by the Germans in the last war. During his years in jug, he thought out the principles of his Christian Workers’ movement. This time he was, of course, arrested again. But he bothered the Gestapo. He does not say so himself, but I have heard in Brussels that the Gestapo feared to hold him, just as they feared to hold von Preysing or Faulhaber. Cardijn was released after five months. They came for him again towards the end. He tells with great glee how he escaped them by climbing and sliding over roofs and walls where the plump policemen could not follow. He is now grizzled, a man in his sixties, but merrier than ever. He talks of risks and escapes as if he had been up to skittish games. My chief difficulty with him is that he now will talk English. He insists that he learned English during the war.

Most of the leaders of the Belgian J.O.C. were arrested. Many are dead. Boys I remember working with passionate enthusiasm in the Centrale at Brussels (can it be six years ago?) are amongst the piled corpses or the scattered ashes of the murder-camps.

Belgian Jocists again had a great part in the Resistance. The extraordinary recovery and the political steadiness of Belgium (the J.O.C. has refused to take sides in the Leopold issue) are largely due to the new sense of social responsibility, which is in turn largely the creation of the J.O.C. So, at least, a Communist told me in Brussels, and I cannot think why he should lie. The association with the Resistance both in France and Belgium has unquestionably knitted the new Christian movements closely into the national life. Before the war, they seemed to be attacking from outside. Now they are recognised as powerful elements within the -social body. This will have its dangers. But it is a necessary stage in the regrowth of Christian life and order. The important thing is that those years of formation and preparation before the war are now’ being justified in the action of Christian men throughout the social system.

In Brussels, in September, there was a conference of the international J.O.C. The war in Europe was only four months ended. But at the meeting there were French, French-Canadians,

English, Americans, Australians . . . and Germans. German Jocists were torn, suppressed, murdered; but German Jocism has survived. These German boys (I am told) like the grgat Bishop of Berlin, were notable for what you can only call their cheerfulness: they have nothing-, but they have everything to do.

In Paris, in one transept of Notre Dame, I saw the other day a tall cross, thirty feet high, perhaps. It was of bare unvarnished wood, oddly naked and plain amongst the Gothic grandeurs. At its feet draped a tri-colour, and there were wreaths set about in mourning. It seems to me a most apt symbol. We have lost the grandeurs of the Gothic age, of the rich centuries of faith. We must begin again at the plain cross, decked as this was decked with the draped flag and wreaths of sorrow. Each day, in thousands, French men and women come to stand by that plain cross, to bow their heads. The cross is to stand at the centre of the Weimar-Buchenwald complex of prison camps, where 51,000 Frenchmen died It commemorates those “qui n’auront pas de tombes mais auxquels le Seigneur a donne la vraie paix”: those who have no graves but to whom God had given the true peace.

Their blood, perhaps, is the seed.