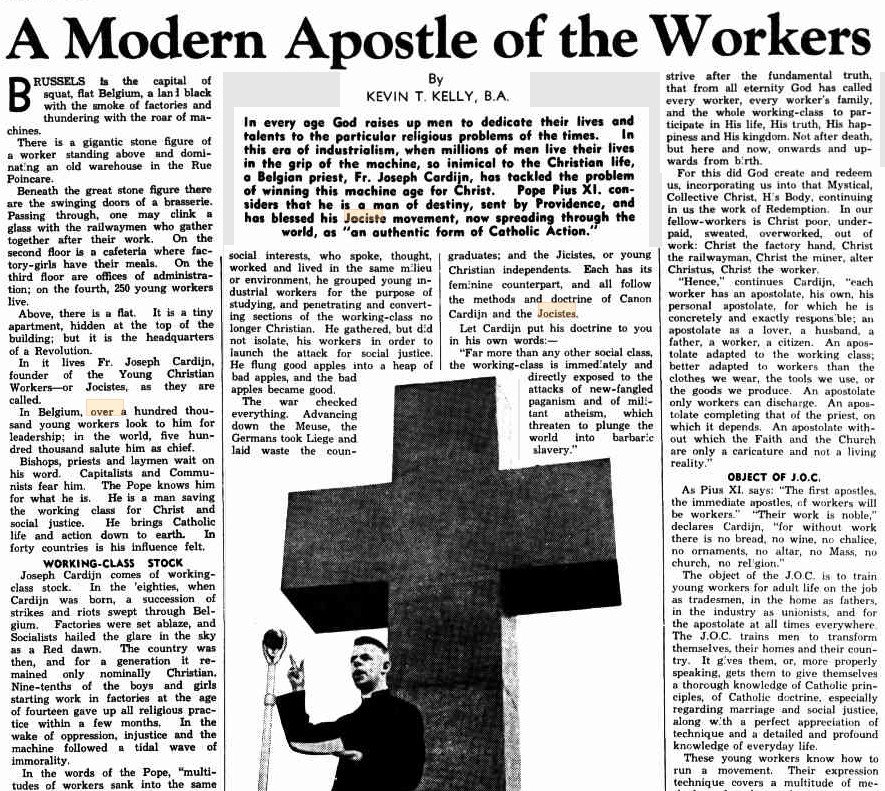 In every age God raises up men to dedicate their lives and talents to the particular religious problems of the times. In this era of industrialism, when millions of men live their lives in the grip of the machine, so inimical to the Christian life, a Belgian priest, Fr. Joseph Cardijn, has tackled the problem of winning this machine age for Christ. Pope Pius XI. considers that he is a man of destiny, sent by Providence, and has blessed his Jociste movement, now spreading through the world, as “an authentic form of Catholic Action.”

Brussels is the capital of squat, flat Belgium, a land black with the smoke of factories and thundering with the roar of machines.

There is a gigantic stone figure of a worker standing above and dominating an old warehouse in the Rue Poincare.

Beneath the great stone figure there are the swinging doors of a brasserie. Passing through, one may clink a glass with the railwaymen who gather together after their work. On the second floor is a cafeteria where factory-girls have their meals. On the third floor are offices of administration; on the fourth, 250 young workers live.

Above, there is a flat. It is a tiny apartment, hidden at the top of the building; but it is the headquarters of a Revolution.

In it lives Fr. Joseph Cardijn, founder of the Young Christian Workers—or Jocistes, as they are called.

Bishops, priests and laymen wait on his word. Capitalists and Communists fear him. The Pope knows him for what he is. He is a man saving the working class for Christ and social justice. He brings Catholic life and action down to earth. In forty countries is his influence felt.

Joseph Cardijn comes of working-class stock. In the ‘eighties, when Cardijn was born, a succession of strikes and riots swept through Belgium. Factories were set ablaze, and Socialists hailed the glare in the sky as a Red dawn. The country was then, and for a generation it remained only nominally Christian. Nine-tenths of the boys and girls starting work in factories at the age of fourteen gave up all religious practice within a few months. In the wake of oppression, injustice and the machine followed a tidal wave of immorality.

In the words of the Pope, “multitudes of workers sank into the same morass; all the more so because very many employers treated their workers as tools.” “The mind shudders,” continues the Pope, “at the frightful perils to which the morals of workers and the virtues of girls are exposed in modern factories. . . . Bodily labour has everywhere been changed into an instrument of strange perversion; for dead matter leaves the factory ennobled and transformed, where men are corrupted and degraded.”

HE WISHED TO CHANGE THE WORLD

The working-class of Belgium had not within itself the seed of renewal. Unwittingly, unconsciously almost, workers slipped into socialism or slunk into despair.

Meanwhile Cardijn grew up, and, entering upon his studies for the priesthood, vowed his life to the service of his own people, the proletariat. While still in the seminary, he saved sufficient to visit England and study there the co-operatives and the trade union movement.

Upon his ordination, he taught for a few months at the University of Louvain; but as early as 1911 he was busy in the industrial parish of Laeken, near Brussels, with a group of young workers, some of whom could neither read nor write, studying wages, hours, holidays and housing, the whole working-class environment. He had set out to understand the world he wished to change.

Already, another great priest had founded the A.C.J.B., the Catholic Young Men’s Society of Belgium. Unlike Cardijn’s group, this association studied apologetics and social doctrine in the abstract, gathering young men from all ranks and classes of society, and holding their interest by sport, a sort of study and entertainment. It was a defensive organisation; it tried to keep men good by sheltering them from a cold, bad world.

Cardijn, meanwhile, pursued a plan radically different; he specialised. Selecting only those who shared the same social interests, who spoke, thought, worked and lived in the same milieu or environment, he grouped young industrial workers for the purpose of studying, and penetrating and converting sections of the working-class no longer Christian. He gathered, but did not isolate, his workers in order to launch the attack for social justice. He flung good apples into a heap of bad apples, and the bad apples became good. The war checked everything. Advancing down the Meuse, the Germans took Liege and laid waste the countryside. Both organisations virtually disappeared. When at last, with the armistice, release came, Fr. Cardijn was appointed director of social works in Brussels, and at once began building a strong union of young workers-La Jeunesse Syndicaliste. But from the new post his eyes greeted a greater vision; he realised that nothing less than a nation-wide, indeed a worldwide, movement of young workers could secure the working masses for Christ, the Sun of Justice. Within five years—in 1925—the Belgian Bishops approved the statutes of the J.O.C.— the Jocistes or Young Christian Workers’ Movement. Shortly afterwards, others were adopting his methods and doctrine, and adapting their activities and constitutions. By 1927 the whole Catholic Youth Movement of Belgium specialised—adapted itself to the various milieux or environments whence its members were drawn.

NO FALSE OR HALF MEASURES

In the face of this threat, safety is found neither in false measures nor in half-measures.

It is useless to propose mere exterior remedies, from outside or above the working-class—remedies backed by the rule of violence, material force or the destruction of freedom.

It is useless to propose for the working-class mere interior remedies, whether temporary or economic or spiritual.

In every department of life we must strive after the fundamental truth, that from all eternity God has called every worker, every worker’s family, and the whole working-class to participate in His life, His truth, His happiness and His kingdom. Not after death, but here and now, onwards and upwards from birth.

For this did God create and redeem us, incorporating us into that Mystical, Collective Christ, His Body, continuing in us the work of Redemption. In our fellow-workers is Christ poor, underpaid, sweated, overworked, out of work: Christ the factory hand, Christ the railwayman, Christ the miner, alter Christus, Christ the worker.

“Hence,” continues Cardijn, “each worker has an apostolate, his own, his personal apostolate, for which he is concretely and exactly responsible; an apostolate as a lover, a husband, a father, a worker, a citizen. An apostolate adapted to the working class; better adapted to workers than the clothes we wear, the tools we use, or the goods we produce. An apostolate only workers can discharge. An apostolate completing that of the priest, on which it depends. An apostolate without which the Faith and the Church are only a caricature and not a living reality.”

As Pius XI. says: “The first apostles, the immediate apostles, of workers will be workers.” “Their work is noble,” declares Cardijn, “for without work there is no bread, no wine, no chalice, no ornaments, no altar, no Mass, no church, no religion.”

The object of the J.O.C. is to train young workers for adult life on the job as tradesmen, in the home as fathers, in the industry as unionists, and for the apostolate at all times everywhere. The J.O.C. trains men to transform themselves, their homes and their country. It gives them, or, more properly speaking, gets them to give themselves a thorough knowledge of Catholic principles, of Catholic doctrine, especially regarding marriage and social justice, along with a perfect appreciation of technique and a detailed and profound knowledge of everyday life.

These young workers know how to run a movement. Their expression technique covers a multitude of methods and a thousand programmes of propaganda. For example, they issue for workers’ sons still at school a paper called “Mon Avenir,” which prepares these small children in every way for working life. Profusely illustrated in several colours, this paper is an excellent compound of Deadwood Dick, religious magazine, propaganda sheet, and vocational training notes.

As soon as a lad leaves school, he passes into the cells or sections of the J.O.C. proper, and there receives “La Jeunesse Ouvriere,” a paper for workers whose ages range between 14 and 25. The cells are organised and led by young workers themselves, with the assistance of chaplains. The chaplains have their paper, and the group leaders, the Militants, have theirs. By means of 17 journals, the whole movement in Belgium embarks on nation-wide campaigns for more intense religious life, more adequate formation for marriage and for the effective realisation of the revolutionary principles of social justice. Each Jociste section is much more than a Royal Commission. Slums, free-time, sport, social abuses, sweating, low wages, exploitation, saving for marriage, home furnishing, factory ventilation—all are studied continuously, with a view to action.

From the J.O.C., the young workers pass as adults into the Christian Workers’ League.

All three movements are financed exclusively by the workers. All are organised, not on a trade or vocational basis, but on a parish and class basis. All owe their origin and inspiration to Canon Cardijn and to Fr. Kothen, his right-hand man.

The movement is not only Belgian. Already it has spread enormously in France, Holland, Switzerland, Portugal, Czechoslovakia and Jugoslavia. It is established in Asia, and has grown tremendously in North and South America. In England, under Archbishop Downey, it is an essential instrument of Catholic thought and action. May it reach—speedily—Australia!

CANON CARDIJN, ADDRESSING 80,000 JOCISTES AT THEIR TENTH ANNIVERSARY CONGRESS IN PARIS LAST YEAR. —Photo by courtesy of the “Catholic Worker.”