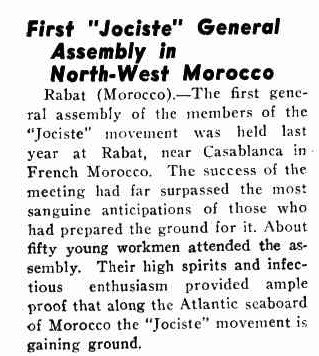 Rabat (Morocco).—The first general assembly of the members of the “Jociste” movement was held last year at Rabat, near Casablanca in • French Morocco. The success of the meeting had far surpassed the most sanguine anticipations of those who had prepared the ground for it. About fifty young workmen attended the assembly. Their high spirits and infectious enthusiasm provided ample proof that along the Atlantic seaboard of Morocco the “Jociste” movement is gaining ground.