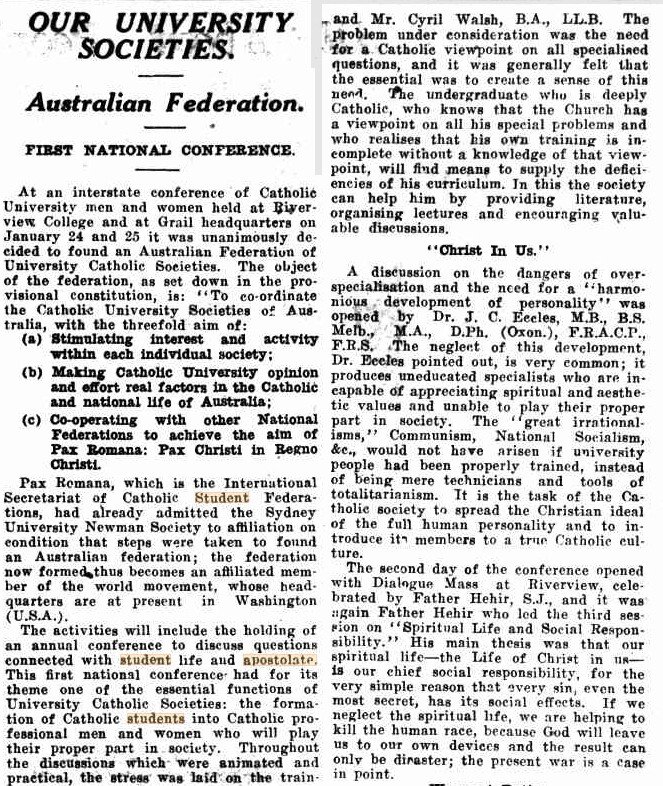 At an interstate conference of Catholic University men and women held at Riverview. College and at Grail headquarters on January 24 and 25 it was unanimously decided to found an Australian Federation of University Catholic Societies. The object of the federation, as set down in the provisional constitution, is: “To co-ordinate the Catholic University Societies of Australia, with the threefold aim of:

(a) Stimulating interest and activity within each individual society;

(b) Making Catholic University opinion and effort real factors in the Catholic and national life of Australia;

(c) Co-operating with other National Federations to achieve the aim of Pax Romana: Pax Christi in Regno Christi.

Pax Romana, which is the International Secretariat of Catholic Student Federations, had already admitted the Sydney University Newman Society to affiliation on condition that steps were taken, to found an Australian federation; the federation now formed thus becomes an affiliated member of the world movement, whose headquarters are at present in Washington (U.S.A.).

The activities will include the holding of an annual conference to discuss questions connected with, student life and apostolate. This first national conference had for its theme one of the essential functions of University Catholic Societies: the formation of Catholic students into Catholic professional men and women who will play their proper part in society… Throughout the discussions which were animated and practical, the ‘Stress’ was laid on the training of the; individual personality.

The conference opened at Riverview with Benediction of the Most Blessed Sacrament, given by Very Rev. Father N. Hehir, S.J. In the opening address which followed. Mr. T. Herbert, B.Ec. explained the purpose of the conference and pointed out its importance in the fact that the spiritual reform of the individual must be the starting point of all social reform. He expressed his confidence that the federation which was about to be formed under difficulties, but in answer to a real need, would grow to bear good fruit. Mr. Herbert then introduced the-speakers: Rev. Father J. F. Slowey and Miss Julie Thornton, who were to open the first discussion on “The; Influence of Catholic Students in our Universities.”

The conclusion reached at the end of this first session was that Catholic students can have an influence on university life, and exercise a real apostolate, provided they make an effort to attain personal sanctity and, at the same time, to widen their circle of acquaintance; they should strive to bring greater unity among the Catholic students and to take their full part in normal, undergraduate life; it is their task, fearlessly but tactfully, to Catholicise the whole atmosphere of the university, to bring a new, and a Catholic spirit. Their apostolate is largely a personal one, but it would be of great value to them to have, in every university, a material centre, a building, or even a room, where they could meet to solve their problems, to prepare themselves and to renew their enthusiasm for their task.

The subject of the second session, “Professional Training and its Problems,” was treated under three headings. The first, ‘The Choice of a Career,’ was introduced by Mr. J. Ferguson, and from the whole discussion there emerged one leading principle — that, in this choice, there should be no exaggerated emphasis on economic security. A sense of divine vocation should be restored with regard to careers. The Catholic University can help by setting a true standard of values and by spreading intelligent views on the utility, but also on the limitation of vocational guidance.

“Specialisation” was the next aspect to be considered and an interesting discussion was opened by Miss Betty Phillips, B.Sc., and Mr. Cyril Walsh, B.A., LL.B. The problem under consideration was the need for a Catholic viewpoint on all specialised questions, and it was generally felt that the essential was to create a sense of this need. The undergraduate who is deeply Catholic, who knows that the Church has a viewpoint on all his special problems and who realises that . his own training is incomplete without a knowledge of that viewpoint, will find means to supply the deficiencies of his curriculum. In this the society can help him by , providing literature, organising lectures and encouraging valuable discussions.

A discussion on the dangers of overspecialisation arid the need for a “harmonious development of personality” was opened: by Dr. J. C. Eccles, M.B. B.S. Melb.,M.A., D.Ph. (Oxon.), F.B.A.C.P., F.K.S,. The neglect of this development, Dr. Eccles pointed out, is very common; it produces uneducated specialists who are incapable of appreciating spiritual and aesthetic values and unable to play their proper part in society. The “great irrationalisms,” Communism, National Socialism, &c, would not have arisen if university people had been properly trained, instead of being mere technicians and tools of totalitarianism. It is the task of the Catholic society to spread the Christian ideal of the full human personality and to introduce the members to a true Catholic culture.

The second day of the conference opened with Dialogue Mass at Riverview, celebrated by Father Hehir, S.J., and it was again Father Hehir who led the third session on “Spiritual Life and Social Responsibility.” His main thesis was that our spiritual life — the Life of Christ in us— is our chief social responsibility, for the very simple reason that every sin, even the most secret, has its social effects. If we neglect the spiritual life, we are helping to ‘ kill the human race, because God will leave is to our own devices and the result can only be disaster; the present war is a case in point.

In the discussion which followed, practical suggestions were made as to the means to be adopted in deepening the spiritual life of students. It was thought that religious activities should be more frequent and loss formal; that Catholic literature can be of great help; that there should be a regular, and not just a spasmodic effort to build up a Catholic atmosphere.

The fourth session of the conference took the form of an informal discussion conducted by the men and women, separately, the women students returning to ‘Loyola’ for lunch. A special talk by Mrs. A. P. Mackerras was also arranged for them at “Loyola.” Its subject was the opportunities open to women graduates to-day, the undergraduates training for life and the special duty of all university women to calm panic under war conditions and to encourage a greater confidence in God.

At 4.30 p.m. all the delegates gathered at Grail headquarters for the adoption of a constitution and the election of officers. The formation of the federation was formally carried, there being six foundation members. Of these only three societies were represented, but three more, unable to be present owing to recent developments, had previously signified their intention of affiliation. An executive committee was elected, consisting of a president (Mr. T. Herbert, B.Ec), an hon. secretary (Mr. E. H. Burke, B.E.), an hon. treasurer (Mr. J. Ferguson) and an hon. assistant-secretary (Miss Rosemary Goldie, B.A.). This committee, together with representatives to be appointed by the affiliated societies, will constitute the council of the federation.

The main business of the conference was at an end, but the delegates remained together for tea at “Loyola” for a brief summing up of the various discussions and for a social evening, which included two plays presented by the Grail dramatic art group — one a mimed burlesque of ‘Hamlet’ and the other W. B. Yeats’s poetical and deeply spiritual play, “The Hour Glass.” The conference was concluded with the recitation of the Creed in the chapel of “Loyola.”

The week-end had been a busy and happy one, and all felt that, whatever the difficulties ahead, it marked a real step towards effective unity of aim and effort among the Catholic students of Australia.