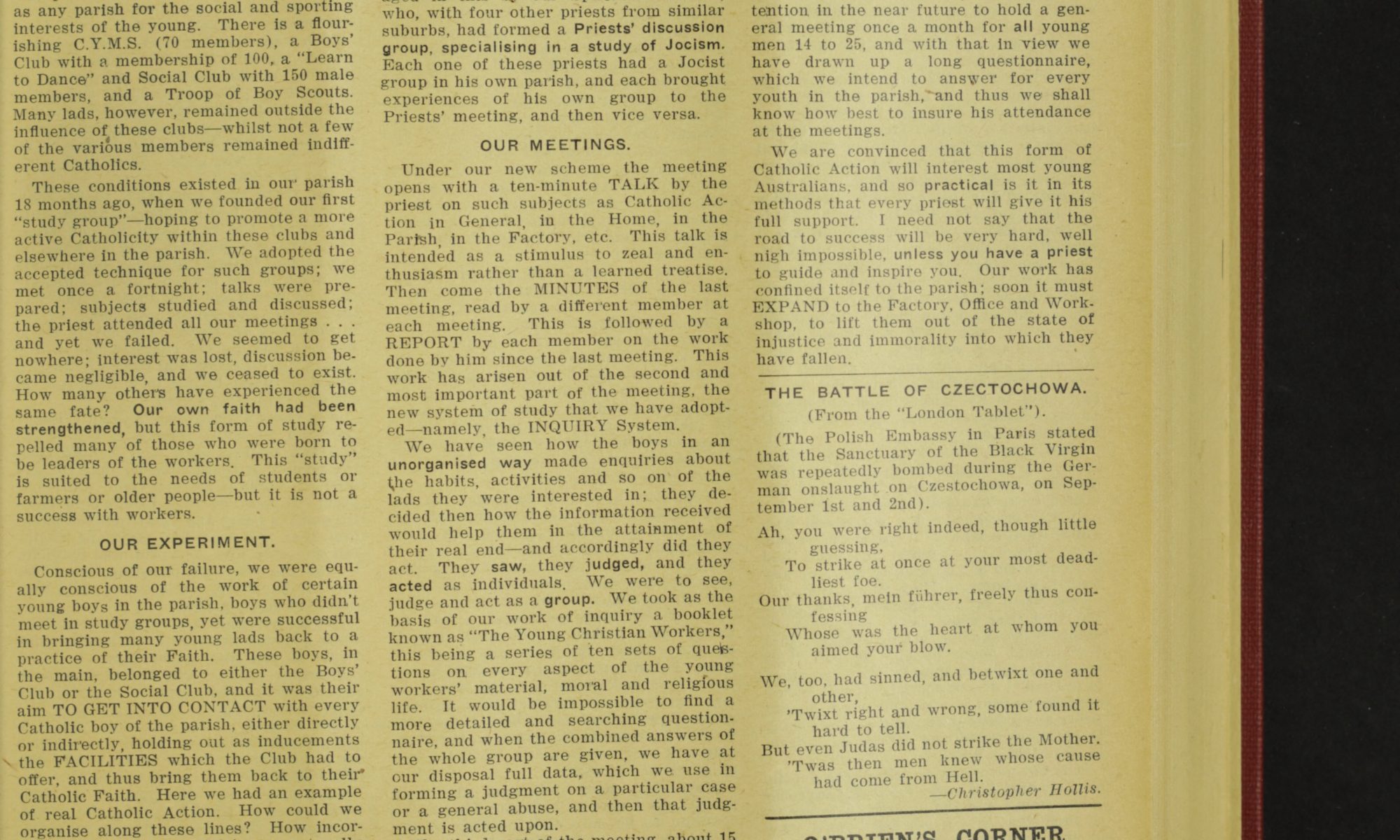 IT is my intention in this brief article to outline the efforts that are being made in an industrial parish to promote Catholic Action among the young workers. Our parish, of 3000 souls, caters as well as any parish for the social and sporting interests of the young. There is a flourishing C.Y.M.S. (70 members), a Boys’ Club with a membership of 100, a “Learn to Dance” and Social Club with 150 male members, and a Troop of Boy Scouts. Many lads, however, remained outside the influence of these clubs —whilst not a few of the various members remained indifferent Catholics.

These conditions existed in our parish 18 months ago, when we founded our first “study group”—hoping to promote a more active Catholicity within these clubs and elsewhere in the parish. We adopted the accepted technique for such groups; we met once a fortnight; talks were prepared; subjects studied and discussed; the priest attended all our meetings… and yet we failed. We seemed to get nowhere; interest was lost, discussion became negligible, and we ceased to exist. How many others have experienced the same fate? Our own faith had been strengthened, but this form of study repelled many of those who were born to be leaders of the workers. This “study” is suited to the needs of students or farmers or older people —but it is not a success with workers.

Conscious of our failure, we were equally conscious of the work of certain young boys in the parish, boys who didn’t meet in study groups, yet were successful in bringing many young lads back to a practice of their Faith. These boys, in the main, belonged to either the Boys’ Club or the Social Club, and it was their aim TO GET INTO CONTACT with every Catholic boy of the parish, either directly or indirectly, holding out as inducements the FACILITIES which the Club had to offer, and thus bring them back to their Catholic Faith. Here we had an example of real Catholic Action. How could we organise along these lines? How incorporate this technique arising so naturally amongst these young Australians? It was obvious that these boys had unconsciously made the Jocist technique of Catholic Action their own. We immediately decided that our group should be rejuvenated, and all its activities based upon Jocist methods. We were encouraged in this by our Spiritual Director, who, with four other priests from similar suburbs, had formed a Priests’ discussion group, specialising in a study of Jocism. Each one of these priests had a Jocist group in his own parish, and each brought experiences of his own group to the Priests’ meeting, and then vice versa.

Under our new scheme the meeting opens with a ten-minute TALK by the priest on such subjects as Catholic Action in General, in the Home, in the Parish, in the Factory, etc. This talk is intended as a stimulus to zeal and enthusiasm rather than a learned treatise. Then come the MINUTES of the last meeting, read by a different member at each meeting. This is followed by a REPORT by each member on the work done by him since the last meeting. This work has arisen out of the second and most important part of the meeting, the new system of study that we have adopted—namely, the INQUIRY System.

We have seen how the boys in an unorganised way made enquiries about the habits, activities and so on of the lads they were interested in; they decided then how the information received would help them in the attainment of their real end—and accordingly did they act. They saw, they judged, and they acted as individuals. We were to see, judge and act as a group. We took as the basis of our work of inquiry a booklet known as “The Young Christian Workers,” this being a series of ten sets of questions on every aspect of the young workers’ material, moral and religious life. It would be impossible to find a more detailed and searching questionnaire, and when the combined answers of the whole group are given, we have at our disposal full data, which we use in forming a judgment on a particular case or a general abuse, and then that judgment is acted upon.

The third part of the meeting, about 15 minutes, is devoted to the study of the MASS, and, later, we intend to study the Sacraments, particularly Marriage.

Everyone knows that Catholic Action is concerned with the material affairs of men since they influence so strongly the spiritual, and so we are endeavouring to help the young unemployed of the parish. We are planning a local register, and we are educating all employees that they are potential employers, since the opportunity of recommending or suggesting a person for a job oftentimes comes their way.

We are doing all we can to plan out the future for the boys in the 8th grade, advising their parents, and procuring scholarships for them. We are planning a Savings Scheme, based on the Schools’ Banking System, thereby instilling thrift into the mind of the young worker, and preparing him for his married life. We are co-operating with the plan for a Workers’ Christmas Camp. It is our intention in the near future to hold a general meeting once a month for all young men 14 to 25, and with that in view we have drawn up a long questionnaire, which we intend to answer for every youth in the parish,”and thus we shall know how best to insure his attendance at the meetings. We are convinced that this form of Catholic Action will interest most young Australians, and so practical is it in its methods that every priest will give it his full support. I need not say that the road to success will be very hard, well nigh impossible, unless you have a priest to guide and inspire you. Our work has confined itself to the parish; soon it must EXPAND to the Factory, Office and Workshop, to lift them out of the state of injustice and immorality into which they have fallen.