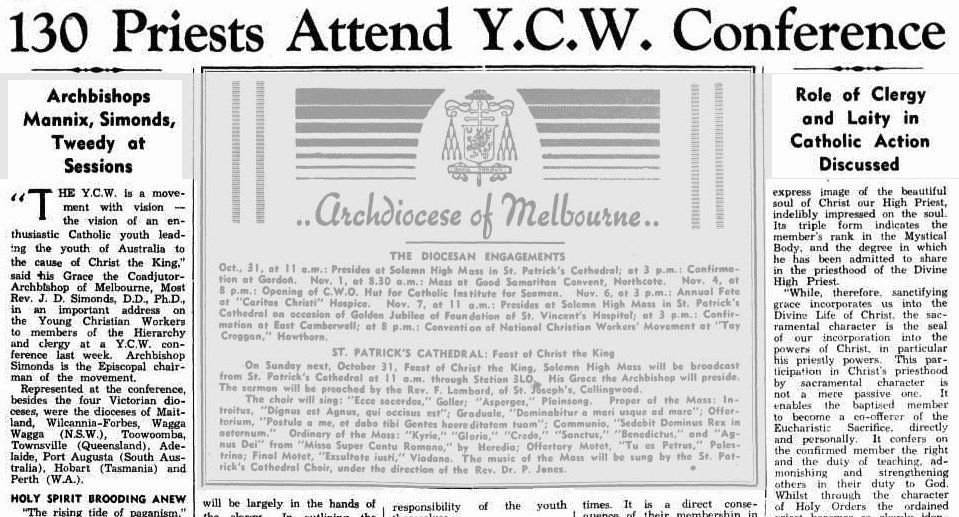 Role of Clergy and Laity in Catholic Action Discussed

THE Y.C.W. is a movement with vision — the vision of an enthusiastic Catholic youth leading the youth of Australia to the cause, of Christ the King,” said His Grace the Coadjutor-Archbishop of Melbourne, Most Rev. J. D. Simonds, D.D., Ph.D., in an important address on the Young Christian Workers to members of the Hierarchy and clergy at a Y.C.W. conference last week. Archbishop Simonds is the Episcopal chairman of the movement. Represented at the conference, besides the four Victorian dioceses, were the dioceses of Maitland, Wilcannia-Forbes, Wagga Wagga (N.S.W.), Toowoomba, Townsville (Queensland), Adelaide, Port Augusta (South Australia), Hobart (Tasmania) and Perth (WA).

“The rising tide of paganism,” continued his Grace, “is not destined to engulf the Church of God, for we can see that the Holy Spirit is already brooding anew over the modern chaos to produce a new human world. The most significant inspiration of the Divine Spirit in our days is that by which He has reawakened in the Church the consciousness that the apostolate of Christ’s Kingdom is not a reserved occupation of the clergy, but is the normal radiation of Christian life by every member of the Body of Christ. The Y.C.W. is youth’s response to that awakening.

“It is an authentic movement of Catholic Action. It has merited many striking eulogies from Pope Pius XI., who, among other things, did not hesitate to say: ‘We have given the definition of Catholic Action and that definition has been perfectly interpreted by the Young Christian Workers.’

“To organise a similar apostolate amongst Australian youth is our high purpose and privilege. I am sure you feel with me that your presence here to-day is destined to become historic, for you are helping to enkindle an apostolic flame in the minds and hearts of young Australians, that will undoubtedly be glowing with its brightest intensity in future years that we shall not live to see.

“The part which the priest has to play in Catholic Action is a very important one, but, at the same time, it is a delicately adjusted role. Pope Pius XI. applied to the chaplains, or ecclesiastical assistants of Catholic Action, the words of the Psalmist: “in manibus tuis sortes meae.” That is the. reason why this conference has been convoked, for I realise that the fate of the Y.C.W. in Australia in its initial stages will be largely in the hands of the clergy. In outlining the role of the priests, the Pope said: ‘The ecclesiastical assistants should be the soul of the associations, the sources of energy, the inspirers of the apostolate, the representatives of episcopal authority.’ These are, of course, normal priestly activities. But the Holy Father was careful to add that the direction of the responsibility of the associations must be left to the” laity. As ministers of Christ and dispensers of the mysteries of God your function will be to form the leaders and members of the Y.C.W. in a thoroughly Catholic spirit, and to give general guidance to the technique of the apostolate according to the directions of the Hierarchy. But the work of the apotolate and the management of their groups are the responsibility of the youth themselves.

“The spiritual formation of the leaders and members is by far your most important work. It is therefore fundamentally important that every ecclesiastical assistant should have clear ideas upon the nature of the lay apostolate, and its relation to the Mystical Body of Christ. The call to Catholic Action is not just a new technique to meet present difficulties by adding lay curates to the clergy because of deficiencies in their ranks. Catholic Action is essential to the very life of the Church. The laity’s right to participate in the apostolate has existed from the beginning, but its importance and its responsibilities are being revealed in a fresh light in modern times. It is a direct consequence of their membership in the Mystical Body of Christ; and the authentic sign of this right is the indelible sacramental character impressed on their souls in the Sacraments of Baptism and Confirmation. Though all the sacraments confer sanctifying grace by which, in St. Peter’s thrilling words, we become partakers of the Divine Nature, three of the sacraments imprint on the soul an indelible character. According to St. Thomas’ beautiful teaching, this character received in the sacraments is actually the character of Christ, or as the word implies, an express image of the beautiful soul of Christ our High Priest, indelibly impressed on the soul. Its triple form indicates the member’s rank in the Mystical Body, and the degree in which he has been admitted to share in the priesthood of the Divine High Priest. “While, therefore, sanctifying grace incorporates us into the Divine Life of Christ, the sacramental character is the seal of our incorporation into the powers of Christ, in particular his priestly powers. This participation in Christ’s priesthood by sacramental character is not a mere passive one. It enables the baptised member to become a co-offerer of the Eucharistic Sacrifice, directly and personally. It confers on the confirmed member the right and the duty of teaching, admonishing and strengthening others in their duty to God. Whilst through the character of Holy Orders the ordained priest becomes so closely identified with Christ that he is able to offer the Eucharistic Sacrifice and confer the sacraments in the person of the Divine Redeemer. Confirmation is therefore the sacrament of Catholic Action; indeed, St. Thomas does not hesitate to call it a quasi ordination. It does not, of course, incorporate the recipient into the administrative and teaching authority of the Hierarchy, but it entitles him to be formally invited to assist in the apostolate. So when he receives this commission he acquires no new rights beyond those already given by the character of Baptism and Confirmation.

KNOWLEDGE AND LOVE OF CHRIST

“It will be your chief function to inspire your leaders with’ a profound realisation of their dignity as members of the Mystical Body, and to fire them with an enthusiasm for Christ their Leader, and for His holy cause in which they have a personally responsible interest. They must know their Leader intimately, for to know Him is to love Him. Therefore, the prayerful study of the Gospel, which puts before them the fascinating personality of Christ, and which teaches them His spirit and His standards of judgment and action, is an integral part of the formation of Y.C.W. leaders. But since the Christian priesthood has two great functions, the apostolate for souls and the liturgical worship of God, it follows that those who are called to share in the apostolate must also actively share in the liturgical worship and prayers of the Church. Both Pius X and Pius XI insisted that the formation of the leaders will not be complete until they have acquired an intense supernatural spirit, that must be drawn from its ‘foremost and indispensable fount, which is liturgical – worship.’ It is also important, of course, that as they are being made more vividly conscious of their incorporation into the Church’s apostolate and worship, they should also grow in loving appreciation of the unique relation which the Blessed Mother bears to the Head and the members of the Mystical Body, and the providential part that she exercises -in the apostolate as the Mother of Divine Grace.

“This whole formation will require long and-patient effort, but I am happy to be able to announce that his Grace the Archbishop has already taken a step which is of. prime importance in the task of training. A property with extensive grounds has recently been purchased at Cheltenham, where selected . groups of leaders will be able to spend each weekend in a course of training and direction uncler one of the chaplains. This action of the Archbishop in setting up for the Y.C.W. leaders a novitiate, that will be the powerhouse f spiritual and intellectual energy of the movement, is destined to have a profound nfluence on the future of its apostolate.

“Side by side with the spiritual formation of the militants goes your responsibility f general guidance in the technique of the apostolate according to the directions of the hierarchy. The special field of the apostolate of the Y.C.W. is that vast mass of Australian youth whose lives are, for the most part, cast in an environment that is either coldly indifferent or actively hostile to the Christian spirit. The Y.C.W. is not just another defensive club that aims at segregating its members and sheltering them from the corrosive influence of their environment. It is a militant and apostolic movement that is determined to take the offensive by penetrating into the environment of the workers, and impregnating its movements and activities with the spirit of Christ.

“Its organisation is first of all developed on parochial lines, for the parish is the canonical unit of spiritual life. But when its spirit has been captured by leaders and groups, it will then grow by division, in order to regroup itself into specialised movements. These will bring the apostolate into the special environments peculiar to groups of workers in factories, workshops or professions. Particular groupings according to common interests or environments form an essential part of Catholic Action and this is the next big development of th6 Y.C.W. which must be organised. But the Holy See has strongly insisted that the specialised movements must always retain a unity, for this is indispensable to Catholic Action. The Y.C.W. will fulfil this function of unity for all the future specialised movements of youth that will develop according to the different industrial or professional environments.

TO WHOM OUR LAND WAS FIRST DEDICATED

“Each morning we ascend the altar in those conditions of tranquillity and spiritual security that belong to the priesthood. It is especially in those moments of grace that we must have compassionate thought for that vast mass “of Australian youth which the voracious industrial machine drags each morning into its inhuman vortex, and after a day of soulless service to the machine is cast out again each evening into homes or places of amusement from which the spirit of Christ has been mostly excluded. More than once the great Heart of our Divine Master was so moved to. compassion at the sight of a crowd fainting with physical hunger, that He gave them miraculous bread. He is surely more deeply moved at the sight of the spiritually starving youth of to-day, and even more anxious to multiply through, the hands of His modern apostles the spiritual bread that endureth unto life everlasting.’ “During the present year the Episcopal Committee for Catholic Action requested me to undertake the direction of the Young Christian Workers’ Movement, which promises to develop into one of the most fruitful activities of the lay apostolate. It was thought fitting that the first conference called to organise the movement on national lines should be a conference of members of the Hierarchy and clergy, whose duty it will be to guide the beginnings of this important movement. I have therefore profound pleasure in bidding you a cordial welcome to the conference, and I express my sincere gratitude for your presence.”