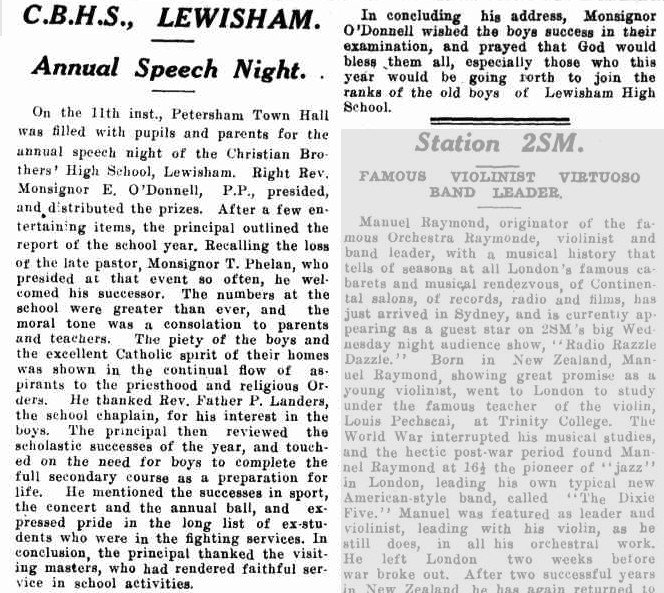 On the 11th inst., Petersham Town Hall was filled with pupils and parents for the ? annual speech night of the Christian Brothers’ High School, Lewisham. Right Rev. Monsignor E. O’Donnell, P.P., presided, and distributed the prizes. After a few entertaining items, the principal outlined the report of the school year. Recalling the loss of the late pastor, Monsignor T. Phelan, who presided at that event so often, he welcomed his successor. The numbers at the

moral tone was a consolation to parents and teachers. The piety of the boys and the excellent Catholic spirit of their homes was shown in the continual flow of aspirants to the priesthood and religious Orders. He thanked Rev. .Father P. Landers, the school chaplain, for his interest in the boys. The principal then reviewed the scholastic successes of the year, and touched on the need for boys to complete the full secondary course as a preparation for life. He mentioned the successes in sport, the concert and the annual ball, and expressed pride in the long list of ex-students who were in the fighting services. In conclusion the principal thanked the visiting masters, who had rendered faithful service in school activities.

Progress of the School.

There were over 200 prizes distributed that night, and it occurred to him that if the progress of the old school had been so great in the last 40 years what would it be in the next 40, when, possibly, two or three times as many boys would be walking across the stage to gather a huge number of prizes. There was one innovation in this night ‘s programme that he wished to emphasise, continued Mr. Gallagher. That was the talks given by two members of the high school Catholic Evidence Guild. To his knowledge, that was the first time that such an ‘item’ had been included by any college in the usual list for entertainment on a speech night. He thought that what had been done there that night might give a lead, and that a similar innovation might well be made by some, or all, of our Catholic colleges at their own similar gatherings.

The delivery, method of presentation, and apparent confidence displayed by the young speakers deserved the highest praise, and their rev. director was to be congratulated. They had chosen difficult but practical subjects. The advice given by them might well be taken by each and every one in the audience. He hoped that this feature on the high school programme at the annual speech night would be a permanent one.

Monsignor O’Donnell said that ius presence at the prizegiving was due mainly to the much-lamented death of his beloved predecessor and good friend, Monsignor Phelan, who had shed his saintly influence over Lewisham parish for 40 years. If Monsignor Phelan were still alive, he himself would be still doing duty in the Vicariate office as the Archbishop’s secretary. He complimented the principal on the eloquent manner in which he presented the annual report. The Monsignor had been wondering why the number of boys at St. Thomas’s School had been decreasing of late. The explanation lay in the steady increase in the number of small boys at the high school. He realised that the training given to the boys at the high school was good, and consequently was glad of the increase of the number on its roll. He was deeply impressed by the eloquent and logical exposition of Catholic teaching given by the two representatives of the high school Catholic Action groups.

The speaker laid further emphasis on the advice already given by the principal to parents and boys, that the boys should not leave School until they had equipped themselves with the necessary qualifications for permanent positions, and that parents should not be too ready to yield to the importunities of their boys to break off their studies early, and grasp at seemingly lucrative positions, which may not prove permanent.

In concluding his address, Monsignor O’Donnell wished the boys success in their examination, and prayed that God would bless J;hem all, especially those who this year would be going fortb to join the ranks of the old boys of Lewisham High School.