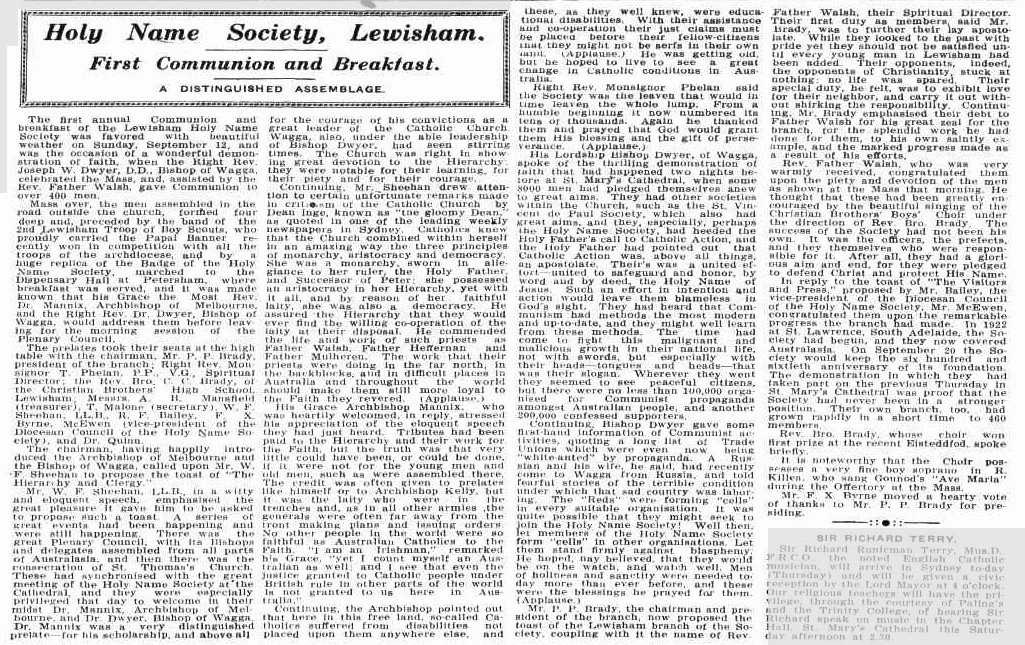 The first annual Communion and breakfast of the Lewisham Holy Name Society was favored with beautiful weather on Sunday, September 12, and was the occasion of a wonderful demonstration of faith, when the Right Rev. Joseph W. Dwyer, D.D., Bishop of Wagga, celebrated the Mass, and, assisted by the Rev. Father Walsh, gave Communion to over 400 men.

Mass over, the men assembled in the road outside the church, fortified four deep and, preceded by the band of the 2nd Lewisham Troop of Boy Scouts, who proudly carried the Papal Banner recently won in competition with all the troops of the archdiocese, an-l by a huge replica of the Badge of the Holy Name Society, marched to the Dispensary Hall at Petersham, where breakfast was served, and it was made known that his Grace the Most Rev. Dr. Mannix, Archbishop of Melbourne, and the Right Rev. Dr. Dwyer, Bishop of Wagga, would address them before leaving for the morning session of the Plenary Council.

The chairman, having happily introduced the Archbishop of Melbourne and the Bishop of Wagga, called upon Mr. W. F. Sheehan to propose the toast of ‘The Hierarchy and Clergy.’

Mr. W. F. Sheehan, LL.B., in a witty and eloquent speech, emphasised the great pleasure it gave him to toe asked to propose such a toast. A series of great events had been happening and were still happening. There was the great Plenary Council, with its Bishops and delegates assembled from all parts of Australasia, and then there was the consecration of St. Thomas’s Church. These had synchronised with the great meeting of the Holy Name Society at’the Cathedral, and they were especially privileged that day to welcome in their midst Dr. Mannix, Archbishop of Melbourne, and Dr. Dwyer, Bishop of Wagga. Dr. Mannix was a very distinguished prelate — for his scholarship, and above all for the courage of his convictions as a great leader of the Catholic Church. Wagga, also, under the able leadership of Bishop Dwyer, had seen stirring times. The Church was right in showing great devotion to the Hierarchy: they were notable for their learning, for their piety and for their courage.

Continuing, Mr. Sheehan drew attention to certain unfortunate remarks made in criticism of the Catholic Church by Dean Inge, known as ‘the gloomy Dean,’ as quoted in one of the leading weekly newspapers in Sydney. Catholics knew that the Church combined within herself in an amazing way the three principles of monarchy, aristocracy and democracy. She was a monarchy, sworn in allegiance to her ruler, the Holy Father, and Successor of Peter: she possessed an aristocracy in her Hierarchy, yet with it all, and by reason of her faithful laity, she was also a democracy. He assured the Hierarchy that they would ever find the willing co-operation of the laity at their disposal. He commended the life and work of such priests as Father Walsh, Father Heffernan and Father Mulheren. The work that their priests were doing in the far north, in the backblocks, and in difficult places in Australia and throughout the world should make them still more loyal to the Faith they revered. (Applause.)

His Grace Archbishop Mannix, who was heartily welcomed, in reply, stressed his appreciation of the eloquent speech they had just heard. Tributes had been ‘ paid to the Hierarchy and their work for the Faith, but the truth was that very little could have been, or could be done, if it were not for the young men and old men, such as were assembled there. The credit was often given to prelates like himself or to Archbishop Kelly, but it was the laity who were in the trenches and, as in all other armies ,the generals were often far away from the front making plans and issuing orders. No other people in the world were so faithful as Australian Catholics to the Faith. ‘I am an Irishman,’ remarked his Grace, ‘yet I count myself an Australian as well; and I see that even the justice granted to Catholic people under British rule in other parts of the world is not granted to us here in Australia.’

Continuing, the Archbishop pointed out that here in this free land, so-called Catholics suffered from -disabilities not placed upon them anywhere else, and these, as they well knew, were educational disabilities. With their assistance and co-operation their just claims must be placed before their fellow-citizens that they might not be serfs in their own land. (Applause. He was getting old, but he hoped to live to see a great cnange in Catholic conditions in Australia.

Right Rev. Monsignor Phelan said the Society was the leaven that would in time leaven the whole lump. From a humble beginning it now numbered its tens of thousands. Again lie thanked them and piayed that God would grant them His blessing and the gift of perseverance. (Applause.)

His His Lordship Bishop Dwyer, of Wagga, spoke of the thrilling demonstration of laity that had happened two nights before at St. Mary’s Cathedral, when some 8000 men had pledged themselves anew to great aims. They had other societies within the Church, such as the St. Vincent de Paul Society, which also had great aims, and they, especially, perhaps the Holy Name Society, had heeded the Holy Father’s call to Catholic Action, and the Holy Father had pointed out that Catholic Action was, above all things, an apostolate. Their’s was a united effort — united to safeguard and honor, by word and by deed, the Holy Name of Jesus. Such an effort in intention and action would leave them blameless in God’s sight. They had heard that Communism had methods the most modern and up-to-date, and they might well learn from these methods. The time had come to fight this malignant and malicious growth in their national life, not with swords, but especially with their heads — tongues and heads — that was their slogan. Wherever they went they seemed to see peaceful citizens, but there were no less than 100,000 organised for Communist propaganda amongst Australian people, and another 200,000 confessed supporters.

Continuing, Bishop Dwyer gave some first-hand information of Communist activities, quoting a long list of Trade Unions which were even now being ‘white-anted’ by propaganda. A Russian and his wife, he said, had recently come to Wagga from Russia, and told fearful stories of the terrible condition under which that sad country was laboring. The ‘Reds’ were forming ‘cells’ in every suitable organisation. It was quite possible that they might seek to join the Holy Name Society! Well then, let members of the Holy Name Society form ‘cells’ in other organisations. Let them stand firmly against blasphemy. He hoped, nay believed, that they would be on the watch, and watch well. Men of holiness and sanctity were needed today more than ever before, and these were the blessings he prayed for them. (Applause.)

Mr. P. P. Brady, the chairman and president of the branch, now proposed the toast of the Lewisham branch of the Society, coupling with it the name of Rev. Father Walsh, their Spiritual Director. Their first duty as members, said Mr. Brady, was to further their lay apostolate. While they looked to the past with pride yet they should not be satisfied until every young man in Lewisham had been added. Their opponents, indeed, the opponents of Christianity, stuck at nothing: no life was spared. Their special duty, he felt, was to exhibit love for their neighbor, and carry it out without shirking the responsibility. Continuing, Mr. Brady emphasised their debt to Father Walsh for his great zeal for the branch, for the splendid work he had done for them, to his own saintly example, and the marked progress made as a result of his efforts.

Rev. Father Walsh, who was very warmly received, congratulated them upon ‘the piety and devotion of the men as shown at the Mass that morning. He thought that these had been greatly encouraged by the beautiful singing of the Christian Brothers’ Boys’ Choir under the direction of Rev. Bro. Brady. The success of the Society had not been his own. It was the officers, the prefects, and they themselves who were responsible for it. After all, they had a glorious aim and end, for they were pledged to defend Christ and protect His Name.

In reply to the toast of ‘The Visitors and Press,’ proposed by Mr. Bailey, the vice-president of the Diocesan Council of the Holy Name Society, Mr. McEwen, congratulated them upon the remarkable progress the branch had made. In 1922 at St. Lawrence, South Adelaide, the Society had begun, and they now covered Australasia. On September 20 the Society would keep the six hundred and sixtieth anniversary of its foundation. The demonstration in which they had taken part on the previous Thursday in St. Mary’s Cathedral was proof that the Society had never been in a stronger position. Their own branch, too, had grown rapidly in a short time to 460 members.

Rev. Bro. Brady, whose choir won first prize at the recent Eisteddfod, spoke briefly. It is noteworthy that the Choir possesses a very fine boy soprano in R. Killea. who sang Gounod’s ‘Ave Maria’ during the Offertory at the Mass.