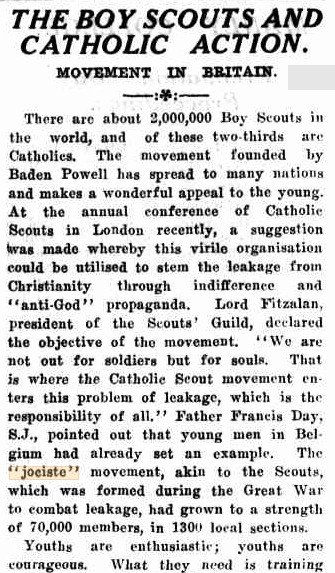 There are about 2,000,000 Boy Scouts in the world, and of these two-thirds are Catholics. The movement founded , by Baden Powell has spread to many nations and makes a wonderful appeal to the young. At the annual conference of Catholic Scouts in London recently, a suggestion was made whereby this virile organisation could be utilised to stem the leakage from Christianity through indifference and ‘anti-God’ propaganda. Lord Fitzalan, president of the Scouts’ Guild,, declared the objective of tho movement. ‘We are not out for soldiers but for souls. That is where the Catholic Scout movement enters this problem of leakage, which is the responsibility of all.’ Father Francis Day, S.J., pointed out that young men in Belgium had already set an example. The ‘jociste’ movement, akin to the Scouts, which was formed during the Great War to combat leakage, had grown to a strength of 70,000 members, in 1300 local sections.

Youths are enthusiastic; youths are courageous. What they need is training and direction. The Catholic Evidence Guild is doing splendid work, but it is difficult to induce men who have spent some years in professional or business, life to face critical. audiences and fence with casuists. The catechetical training of the Catholic Evidence speakers,, could be applied to the Scout movement a tremendous impetus would be given to genuine missionary work. The Boy Scout has the “spirit of service;” it should be put to the best use. The special notes of the Scouts and Guides are eminently Catholic notes— an unselfish, outlook on life, their sense that class distinctions are meaningless in the; brotherhood of fellow men, and, as the necessary means to acquiring these virtues, self discipline and willing submission to a reasonable, efficient, and yet non-repressive corporate discipline, As Archbishop Downey told the Liverpool Scouts recently, if the movement had spread wider in its early days there would not be such a lamentable lack of self discipline as is evident among many of our young, people to-day.

It is the general complaint that the present generation suffers from a lack of moral fibre. The, doctrine of so-called self-expression— meaning self-indulgence and directly contrary to the true self -expression of the strong, disciplined character— is the cant of the day. Men and women are encouraged to chafe against all; self-restraint, to follow the mood or passion of the moment, and then to assume the direction of their, own destinies and those of the nation also, before they have learned to obey. Beneath an appearance of bluff there is lack of confidence, producing weakness of character. Now be it observed that such weakness, fad or nostrum plays into the hands of any that may come along to take advantage of it. An ill-disciplined; and irresolute people of a nominally Christian and civilised country would be the ideal material for the campaign of anti-Christ. On the contrary, youth sound in mind and body,; self-disciplined and banded together in a common cause, inspired by religious zeal, marching onward beneath the banner of Christ the King; this, and the generation of men and women that will grow from it, is the one thing anti-Christ fears, and with good reason.

In a recent review of Boy Scouts in the Vatican-City, when 10,000 boys paraded before him, the Holy Father said:

“You are the younger generation— the noble, flourishing, vigorous hope of your religion and your Church as of your family and country. It is not only that you are young Catholics, you are young Catholic Scouts. And. that ‘word’ Scout means much. To be a Scout, youth alone does not suffice. Youth may, have all keenness and energy, but all the young are not Scouts. There are many who prefer an easier, quieter, less perilous way of life. A Scout needs to be ever ready for effort and courage, and at the same time for calmness and thought. Moreover, the mind of the Catholic Scout is ever permeated by Almighty God, His Divine Law, His Divine Presence, which harmonise the marvels of nature, showing their special beauties, their hidden meanings, their precious lessons. The Catholic Scout is strong and brave, and knows the road to take; he knows the path that duty traces for him: Calmness and thought. You are not out in search of empty adventure. With you it is the spirit which carries you through difficulty and trial. It is always good to train the spirit for this struggle. Life has such need of spiritual energy for good that it may remedy evil. The stronger you now hold to your purpose and duties as Scouts the Ignore faithfully you will place always spirit over matter, and matter under spirit, the more you will put the thought of God and the teachings of the faith above, all other thoughts and teachings. The movement to utilise Boy Scouts as an advance guard in the campaign against infidelity, known as Catholic Action, has already begun. The Society of St. Joseph’s Catechists was formed about a year ago in London. Last June the first certificates indicating that the recipients had followed a course of instruction and passed an examination were granted to six Rovers. Ten persevered with the course, but only six stood for examination. That is, of course, only a small beginning, but it is the work of one small area. The lectures were given at lunch hour, and by Father Devas, S.J., in the evenings at Farm-street Church. As the matter is of very great importance we intend to publish an extended report of the London Scout Conference, in the hope that it may inspire a similar movement in Australia.