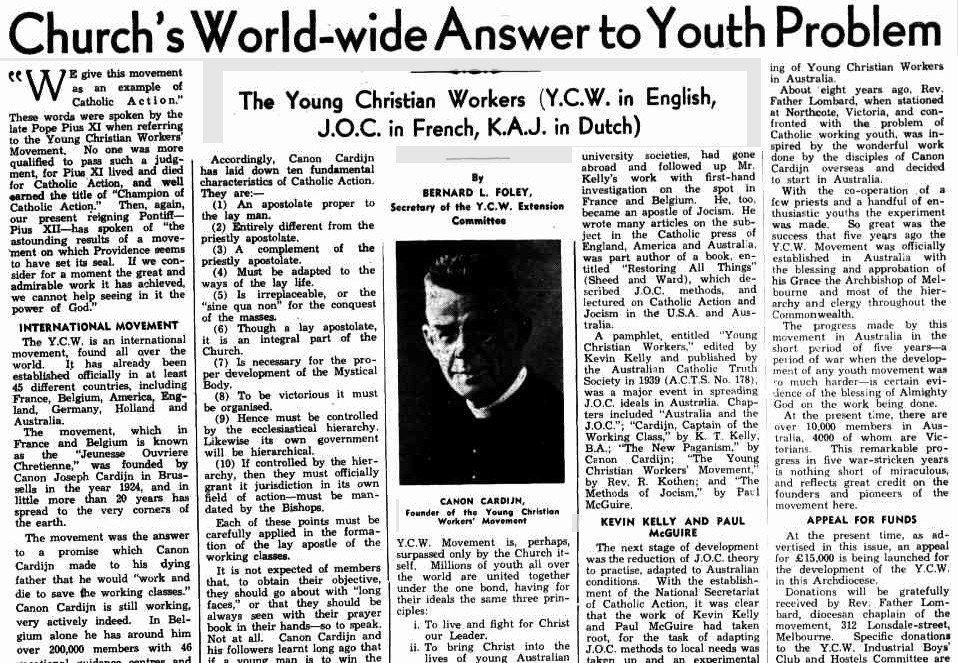 By BERNARD L. FOLEY, Secretary of the Y.C.W. Extension Committee

“We give this movement as an this example of Catholic Action.” These words were spoken by the late Pope Pius XI when referring to the Young Christian Workers’ Movement. No one was more qualified to pass such a judgment, for Pius XI lived and died for Catholic Action, and well earned the title of “Champion of Catholic Action” Then, again, our present reigning Pontiff-Pius XII—has spoken of “the astounding results of a move-•ment on which Providence seems to have set its seaL If we consider for a moment the great and admirable work it has achieved, we cannot help seeing in it the power of God.”

The Y.C.W. is an international movement, found all aver the world. It has already been established’ officially in at least 45 different countries, including France, Belgium, America, England, Germany, Holland and Australia.

The movement, which in France and Belgium is known as the “Jeunesse Ouvriere Chretienne,” was founded by Canon Joseph Cardijn in Brussells in the year 1924, and in little more than 20 years has spread to the very corners of the earth.

The movement was the answer to a promise which Canon Cardijn made to his dying father that he would “work and die to save ihe working classes.” Canon Cardijn is still working, very actively indeed. In Belgium alone he has around him over 200,000 members with 46 vocational guidance centres and 142 permanent employees. Here, there are also three holiday camps, several hostels and cafes, and facilities for supplying the legitimate wants of youth.

Although Belgium is regarded as the Mecca of Y.C.W. activities, Canon Cardijn himself confesses that the movement is far more prosperous and flourishing in France. Here there are 400,000 members, 200 permanent employees, and all facilities for youth, and far more even than are to be found in Belgium. Here the “Jocists” have their own press, and control their own literature. They publish their own weekly paper, “Jeunesse Ouvriere,” and many popular . periodicals.

So well organised is the Jocist movement in Belgium that it was used by the British Army as a medium of communication. The same applies throughout the world. In nearly every country, the Y.C.W. Movement is becoming established as a strong national as well as Christian movement.

The activities of the Y.C.W. are many and varied. Everywhere is to be found the same fundamental technique for educating youth to its full responsibility in every phase of life, whether at home, work or leisure. This is true Catholic Action. As Canon Cardijn himself puts it:— “It is the lay life which must become an apostolate, for the Apostolate of the Laity by the Laity is the true basis on which Catholic Action is built. Forget this and we will lose our perspective in a welter of arbitrary terms and theories, and our subsequent efforts will certainly fail to reach the people’s daily life. Without the lay apostolate we will never Christianise the nonreligious life of the masses.”

Accordingly, Canon Cardijn has laid down ten fundamental characteristics of Catholic Action. They are:—

(1) An apostolate proper to the lay man.

(2) Entirely different from the priestly apostolate.

(3) A complement of the priestly apostolate.

(4) Must be adapted to the ways of the lay life.

(5) Is irreplaceable, or the ‘sine qua non” for the conquest of the masses.

(6) Though a lay apostolate, it is an integral part of the Church.

(7) Is necessary for the proper development of the Mystical Body.

(8) To be victorious it must be organised.

(9) Hence must be controlled by the ecclesiastical hierarchy. Likewise its own government will be hierarchical.

(10) If controlled by the hierarchy, then they must officially grant it jurisdiction in its own field of action—must be mandated by the Bishops.

Each of these points must be carefully applied in the formation of the lay apostle of the working classes.

It is not expected of members that, to obtain their objective, they should go about with “long faces,” or that they should be always seen with their prayer book in their hands—so to speak. Not at all. Canon Cardijn and his followers learnt long ago that if a young man is to win the confidence and respect of his fellow-worker he must meet him on his own ground. He must show him how easy it is to be a good Christian, and also how being a good Christian does not necessarily mean the foregoing of honest sport and recreation, social activities or any of the really good things which are so attractive to the youth of today.

Before the establishment of the Y.C.W. Movement, Catholics were organised into sodalities, clubs, societies, sporting associations, etc. This is all very good, but to-day we must go deeper, far deeper into the lives of individuals and the problems of society in general.

We must realise that the greater part of a man’s active life is spent in his office, workshop, shop or factory. There is the need for Catholic Action. That is why the Y.C.W. has pledged itself to help fellowworkers at work. They realise that no matter what Christian environment may be provided for youth at home or at leisure, it is totally inadequate. They must go further and take that environment to the” place of his work. There the danger lies. There workers are closely associated with fellow-workers, and there lives are moulded according to the environment which surrounds them. The Y.C.W. aims to make this good Christian environment, and thereby make all workers good Christians. This may seem a terrific task, but it is inevitable if youth is to be re-christianised. That is why the Y.C.W. spends so much time training leaders so that they may be equipped with the knowledge and qualities necessary to create that environment at their work.

For scope and universality, the Y.C.W. Movement is, perhaps, surpassed only by the Church itself. Millions of youth all over the world are united together under the one bond, having for their ideals the same three principles:

i. To live and fight for Christ our Leader.

ii. To bring Christ into the lives of young Australian Workers.

iii. To help the Young Worker at home, at work, and at leisure.

Shortly after the end of the war (December, 1945) an important Catholic Youth Conference was held at Versailles in France From this, it was learnt that the J.O.C. (workers 14-25), J.A.C: (agriculturists), J.M.C. (marines), J.I.C. (independent professionals) and the J.E.C. (students) have a total membership of over 800,000: all active and financial despite the short time since the end of the war, and the reconquest of France from the enemy. What marvellous organisation!

THE Y.C.W. IN AUSTRALIA

The origins of the Y.C.W. in Australia go back some twelve years to the National Eucharistic Congress, held in Melbourne in 1934. At that time, the Campion Society was in its early, dynamic years. One of its members, Kevin T. Kelly, a Melbourne University student, made a special study of world Catholic Action, with special reference to the youth problem, in preparation for a paper, which he read at a convention of Australian Catholic University societies, held during the congress. Mr. Kelly’s researches brought him into contact by correspondence with present youth leaders in France and Belgium, who supplied him with the ideas, handbooks and publications of the growing J.O.C. As a result of his studies, Mr. Kelly became a one-man apostle of Jocist ideas in Australia and his lectures and writings at Campion meetings and in the Catholic press, scattered the seeds of Jocism in Australia.

Meanwhile, Mr. Paul McGuire, of the Catholic Guild of Social Studies, Adelaide, who also read a paper at the Melbourne Congress convention of university societies, had gone abroad and followed up Mr. Kelly’s work with first-hand investigation on the spot in France and Belgium. He, too, became an apostle of Jocism. He wrote many articles on the subject in the Catholic press of England, America and Australia, was part author of a book, entitled “Restoring All Things” (Sheed and Ward), which described J.O.C. methods, and lectured on Catholic Action and Jocism in the U.S.A. and Australia.

A pamphlet, entitled “Young Christian Workers,” edited by Kevin Kelly and published by the Australian Catholic Truth Society in 1939 (A.C.T.S. No. 178), was a major event in spreading J.O.C. ideals in Australia. Chapters included “Australia and the J.O.C.”; “Cardijn, Captain of the Working Class,” by K. T. Kelly, B.A.; “The New Paganism,” by Canon Cardijn; “The Young Christian Workers’ Movement,” by Rev. R. Kothen; and “The Methods of Jocism,” by Paul McGuire.

The next stage of development was the reduction of J.O.C. theory to practise, adapted to Australian conditions. With the establishment of the National Secretariat of Catholic Action, it was clear that the work of Kevin Kelly and Paul McGuire had taken root, for the task of adapting J.O.C. methods to local needs was taken up and an experimental period inaugurated for organising of Young Christian Workers in Australia.

About eight years ago, Rev. Father Lombard, when stationed at Northcote, Victoria, and confronted with the , problem of Catholic working youth, was inspired by the wonderful work done by the disciples of Canon Cardijn overseas and decided to start in Australia.

With the co-operation .of a few priests and a handful of enthusiastic youths the experiment was made. So great was the success that five ye^rs ago the Y.C.W. Movement was officially established in Australia with the blessing and approbation of his Grace the Archbishop of Melbourne and most of the hierarchy and. clergy throughout the Commonwealth.

The progress made by this movement in Australia in the short period of five years—a period of war when the development of any youth movement was so much harder—is certain evidence of the blessing of Almighty God on the work being done. At the present time, there are over 10,000 members in Australia, 4000 of whom are Victorians. This remarkable progress in five war-stricken years is nothing short of miraculous, and reflects great credit on the founders and pioneers of the movement here.

At the present time, as advertised in this issue, an appeal for £15,000 is being launched for the development of the Y.C.W. in this Archdiocese. Donations will be gratefully received by Rev. . Father Lombard, diocesan chaplain of the movement, 312 Lonsdale-street, Melbourne. Specific donations to the Y.C.W. Industrial Boys’ Club and Hostels Committee are tax rebatable.