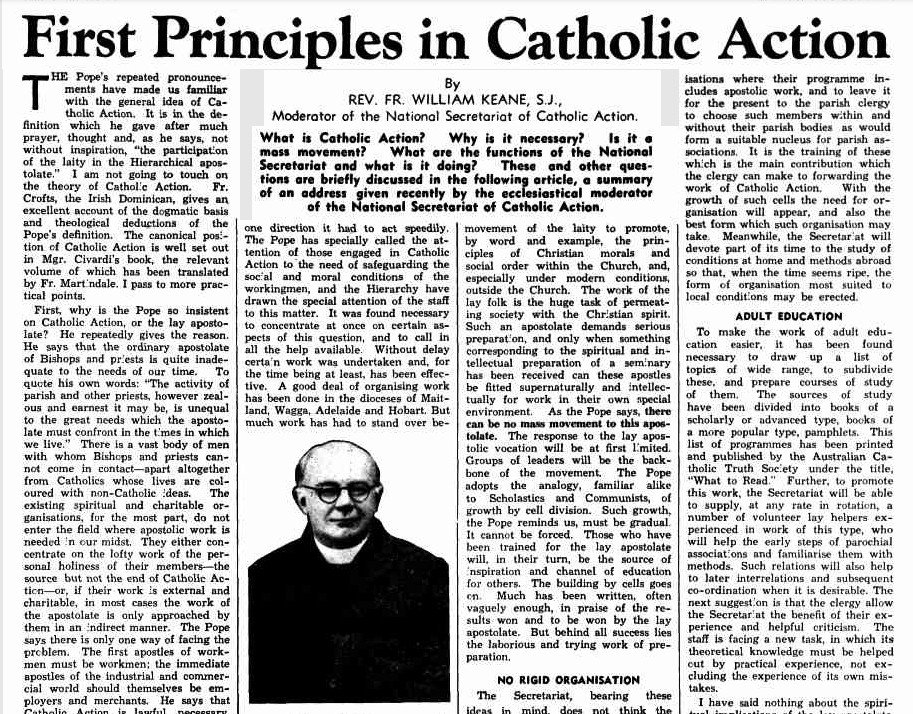 THE Pope’s repeated pronouncements have made us familiar with the general idea of Catholic Action. It is in. the definition which he gave after much prayer, thought and, as he says, not without inspiration, ‘”the participation of the laity in the Hierarchical apostolate.”

I am not going to touch on the theory of Catholic Action. Fr. Crofts, the Irish Dominican, gives an excellent account of the dogmatic basis and theological deductions of the Pope’s definition.

The canonical position of Catholic Action is well set out in Mgr. Civardi’s book, the relevant volume of which has been translated by Fr. Martindale. I pass to more practical points.

First, why is the Pope so insistent on Catholic Action, or the lay apostolate? He repeatedly gives the reason. He says that the ordinary apostolate of Bishops and priests is quite inadequate to the needs of our time.

To quote his own words: “The activity of parish and other priests, however zealous and earnest it may be, is unequal to the great needs which the apostolate must confront in the times in which we live.”

There is a vast body of men with whom Bishops and priests cannot come in contact—apart altogether from Catholics whose lives are coloured with non-Catholic ideas.

The existing spiritual and charitable organisations, for the most part, do not enter the field where apostolic work is needed in cur midst. They either concentrate on the lofty work of the personal holiness of their members—the source but not the end of Catholic Action—or, if their work is external and charitable, in most cases the work of the apostolate is only approached by them in an indirect manner.

The Pope says there is only one way of facing the problem. The first apostles of workmen must be workmen; the immediate apostles of the industrial and commercial world should themselves be employers and merchants.

Accepting the teaching of the magisterium that Catholic Action is necessary, we next ask what form it is to take. The Pope is constantly insisting that it must be organised and unified. “Catholic Action must have its own proper organisation, single, disciplined and able to control all Catholic forces. Lack of co-ordination weakens the force of the army, and is a misfortune to be avoided at all costs.”

Accordingly, at the Plenary Council held in Sydney last September, the Australian Hierarchy decided to set up a Catholic Action organisation.

To carry out this decision, an episcopal sub-committee was named, of which his Grace of Melbourne is chairman, and his Grace of Hobart is the secretary. -Under them has been appointed, in accordance with the Pope’s idea, a lay organisation, called the National Secretariat of Catholic Action, consisting of one full-time and one part-time secretary, with what is technically called an ecclesiastical assistant attached.

The office of the Secretariat is at 368 Collins-street, Bank of New South Wales Buildings. ‘Phone: MU 1024.

The Secretariat is already aware of an initial and irrevocable error. The staff see that at least a year’s work should have been done in preparation before active operations commenced.

For as soon as the office was opened there began to pour in a stream of requests for advice, help and guidance that is consoling only to this extent, that it shows what an enormous reservoir of zeal is waiting to be tapped’ and, what is of equal importance, what an amount of effort might be directed in a futile and even dangerous manner unless under due control.

The Secretariat has not had time even to complete its office arrangements. It has not had time to take more than the very early steps to an examination of the work to be done and the resources at the disposal of the Church for that work. It has been overwhelmed with calls from all over Australia. In one direction it had to act speedily.

The Pope has specially called the attention of those engaged in Catholic Action to’the need of safeguarding the social and moral conditions of the workingmen, and the Hierarchy have drawn the special attention of the staff to this matter.

It was found necessary to concentrate at once on certain aspects of this question, and to call in all the help available. Without delay certain work was undertaken and, for the time being at least, has been effective. A good deal of organising work has been done in the dioceses of Maitland, Wagga, Adelaide and Hobart. But much work has had to stand over because of the restricted means available.

In Melbourne certain bodies immediately affiliated with the Secretariat, such as the Chemists’ Guild, the Assisian Guild, the Campion and Clitherow societies, little being needed but to point the way in which their help would be most useful.

A start has been made with the work ordered by the Pope in organising in Corpus Christi College groups of senior students who are preparing to study this branch of what the Pope calls the new pastoral theology. The medical guild of St. Luke has, at its own insistent request, adopted within itself a form of organised groups working along suitable lines. Heads of colleges have begun an investigation, under the auspices of the Secretariat, of the best manner of preparing the young to take their place in the ranks of Catholic Action.

But this touches only the fringe of Catholic Action. Though certain progress has been made along developing vocational Catholic Action, the main work, still scarcely begun, lies in the parishes.

This brings us to the question of the priest’s part in Catholic Action, how he is to help and at what he is to help. The Pope, or his approved spokesmen, have unweariedly urged the paramount place of the clergy in this movement.

All Catholic laymen, the Pope tells us, are called to the royal priesthood of the apostolate. But there can be no independent apostolate. Participation, collaboration are the words to be stressed.

Nor can anyone be blind to the danger of a lay apostolate unless wisely guided. The guidance is to come first from the Pope. The immediate direction is to be under the Hierarchy.

“Nil sine episcopo” is primary, and the importance of that motto has, I think, already been learned by the staff in a practical manner. But the actual work will assuredly fall on the priests of the parishes.

To cite the Pope’s words, “The clergy must do their part, because Catholic Action can neither begin, nor prosper, nor produce its proper fruit without the assiduous and diligent activity of the priests. The lay apostolate is the forward movement of the laity to promote, by word and example, the principles of Christian morals and social order within the Church, and, especially under modern conditions, outside the Church.

The work of the lay folk is the huge task of permeating society with the Christian spirit. Such an apostolate demands serious preparation, and only when something corresponding to the spiritual and intellectual preparation of a seminary has been received can these apostles be fitted supernaturally and intellectually for work in their own special environment.

As the Pope says, there -can be no mass movement to this apostolate. The response to the lay apostolic vocation will be at first limited. Groups of leaders will be the backbone of the movement.

The Pope adopts the analogy, familiar alike to Scholastics and Communists, of growth by cell division. Such growth, the Pope reminds us, must be gradual. It cannot be forced. Those who have been trained for the lay apostolate will, in their turn, be the source of inspiration and channel of education for others. The building by cells goes on.

Much has been written, often vaguely enough, in praise of the results won and to be won by the lay apostolate. But behind all success lies the laborious and trying work of preparation.

The Secretariat, bearing these ideas in mind, does not think the time ripe for setting up any new and rigid form of parochial organisation throughout Australia. No organisation suited to the whole country can be envisaged. Conditions vary through the country, and even in the same diocese.

At one and the same time the staff has been engaged in drawing up programmes of preparatory study for workers, two groups of farmers in country parishes, at opposite ends of the State, the Medical Guild groups, and some groups” engaged in the Youth movement amongst girls.

The view of the Secretariat is that for the present the steps to be taken are to affiliate those bodies already engaged in Catholic Action and to eliminate overlapping where possible; to make use of existing organisations where their programme includes apostolic work, and to leave it for the present to the parish clergy to choose such members within and without their parish bodies as would form a suitable nucleus for parish associations. It is the training of these which is the main contribution which the clergy can make to forwarding the work of Catholic Action.

With the growth of such cells the need for organisation will appear, and also the best form which such organisation may take. Meanwhile, the Secretariat will devote part of its time to the study of conditions at home and methods abroad so that, when the time seems ripe, the form of organisation most suited to local conditions may be erected.

To make the work of adult education easier, it has been found necessary to draw up a list of topics of wide range, to subdivide these, and prepare courses of study of them. The sources of study have been divided into books of a scholarly or advanced type, books of a more popular type, pamphlets.

This list of programmes has been printed and published by the Australian Catholic Truth Society under the title, “What to Read.” Further, to promote this work, the Secretariat will be able to supply, at any rate in rotation, a number of volunteer lay helpers experienced in work of this type, who will help the early steps of parochial associations and familiarise them with methods. Such relations will also help to later interrelations and subsequent co-ordination when it is desirable.

The next suggestion is that the clergy allow the Secretariat the benefit of their experience and helpful criticism. The staff is facing a new task, in which its theoretical knowledge must be helped cut by practical experience, not excluding the experience of its own mistakes.

I have said nothing about the spiritual implications of the lay apostolate. It is obvious that it calls for the exercise of much virtue among the laity. In particular there will be need of the virtues of zeal, of prudence, of obedience, and of avoidance of the spirit of criticism that springs from inexperience, impulsiveness, or pure human “cussedness.”

The Pope does make one special recommendation, the promotion of the retreat movement especially amongst the lay apostles.

To summarise what has been said:

(1) The work of the lay apostolate in its organised form is one which experience, Episcopal instruction, Papal direction, teach to be of primary importance for the kingdom of God;

(2) that the work rests for its success, humanly speaking, chiefly on the zeal and initiative of the parish clergy;

(3) that the Secretariat, at its present stage of development, thinks that its most useful public work will be done, not in large-scale organisation, but in giving such help and impulse as may second the work of the clergy.