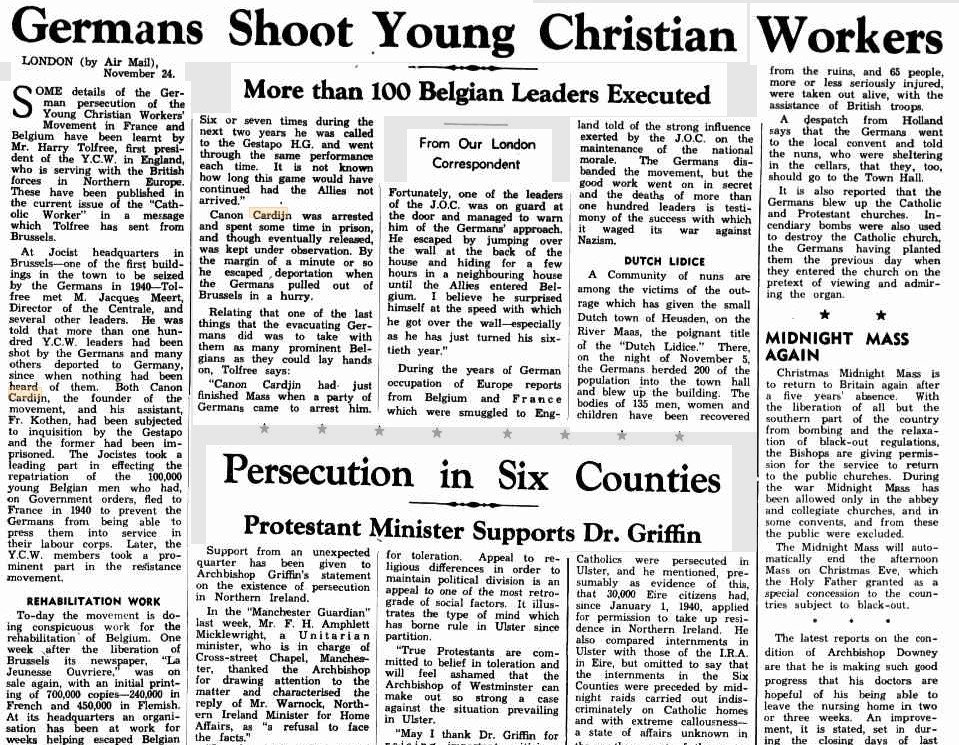 From Our London Correspondent

SOME details of the German persecution of the Young Christian Workers’ Movement in France and Belgium have been learnt by Mr. Harry Tolfree, first president of the Y.C.W. in England, who is serving with the British forces in Northern Europe. These have been published in the current issue of the “Catholic Worker” in a message which Tolfree has sent from Brussels.

At Jocist headquarters in Brussels—one of the first buildings in the town to be seized by the Germans in 1940—Tolfree met M. Jacques Meert, Director of the Centrale, and several other leaders. He was told that more than one. hundred Y.C.W. leaders had been shot by the Germans and many others deported to Germany, since when nothing had been heard of them. Both Canon Cardijn, the founder of the movement, and his assistant, Fr. Kothen, had been subjected to inquisition by the Gestapo and the former had been imprisoned. The Jocistes took a leading part in effecting the repatriation of the 100,000 young Belgian men who had, on Government orders, fled to France in 1940 to prevent the Germans from being able to press them into service in their labour corps. Later, the Y.C.W. members took a prominent part in the resistance movement.

To-day the movement is doing conspicuous work for the rehabilitation* of Belgium. One week after the liberation of Brussels its newspaper, “La Jeunesse Ouvriere,” was on sale again, with an initial printing of 700,000 copies—240,000 in French and 450,000 in Flemish. At its headquarters an organisation has been at work for weeks helping escaped Belgian prisoners to find and reunite •with their families.

The unsavoury methods of the Gestapo in their interrogation of prisoners were revealed by Fr. Kothen, who, because of his contacts with Britain before the war, was kept under surveillance and summoned six or seven times to Gestapo headquarters for questioning.

“On arrival,” says Tolfree, “he was shown into a very large room, where his statement was taken down by a stenographer. Immediately he , had finished, he was told to repeat everything again. During the whole of the interview a wireless set blared forth Wagner music and numerous officials walked in and out continuously —obviously to make it as difficult as possible to concentrate.

Six or seven times during the next two years he was called to the Gestapo H.Q. and went through the same performance each time. It is not known how long this game would have continued had the Allies not arrived.”

Canon Cardijn was arrested and spent some time in prison, and though eventually released, was kept under observation. By the margin of a minute or so he escaped , deportation when the Germans pulled out of Brussels in a hurry.

Relating that one of the last things that the evacuating Germans did was to take with them as many prominent Belgians as they could lay hands on, Tolfree says: “Canon Cardjin had just finished Mass when a party of Germans came to arrest him,

Fortunately, one of the leaders of the J.O.C. was on guard at the door and managed to warn him of the Germans’ approach. He escaped by jumping over the wall at the back of the house and hiding for a few hours in a neighbouring house until the Allies entered Belgium. I believe he surprised himself at the speed with which he got over the wall—especially as he has just turned his sixtieth year.”

During the years of German occupation of Europe reports from Belgium and: France which were smuggled to England told of the strong influence exerted by the J.O.C. on the maintenance of the national morale. The Germans disbanded the movement, but the good work went on in secret and the deaths of more than one hundred leaders is testimony of the success with which it waged its war against Nazism.

A Community of nuns are among the victims of the outrage which has given the small Dutch town of Heusden, on the River Maas, the poignant title o? the “Dutch Lidice.” There, on the night of November 5, the Germans herded ,200 of the population into the town hall and blew up the building. The bodies of 135 men, women and children have been recovered from the ruins, and 65 people, more or less seriously injured, were taken out alive, with the assistance of British troops.

A despatch from Holland says that the Germans went to the local convent and told the nuns, who were sheltering in the cellars, that they, too, should go to the Town Hall.

It is also reported that the Germans blew up the Catholic and Protestant churches. Incendiary bombs were also used to destroy the Catholic church, the Germans having planted them the previous day when they entered the church on the pretext of viewing and admiring the organ.

Christmas Midnight Mass is to return to Britain again after a five years’ absence. With the liberation of all but the southern part of the country from bombing and the relaxation of black-out regulations, the Bishops are giving permission for the service to return to the public churches. During the war Midnight Mass has been allowed only in the abbey and collegiate churches, and in some convents, and from these the public were excluded. The Midnight Mass will automatically end the afternoon Mass on Christmas Eve, which the Holy Father granted as a special concession to the countries subject to black-out.

The latest reports on the condition of Archbishop Downey are that he is making such good progress that his doctors are hopeful of his being able to leave the nursing home in two or three weeks. An improvement, it is stated, set in during the closing days of last week, and has been steadily maintained.