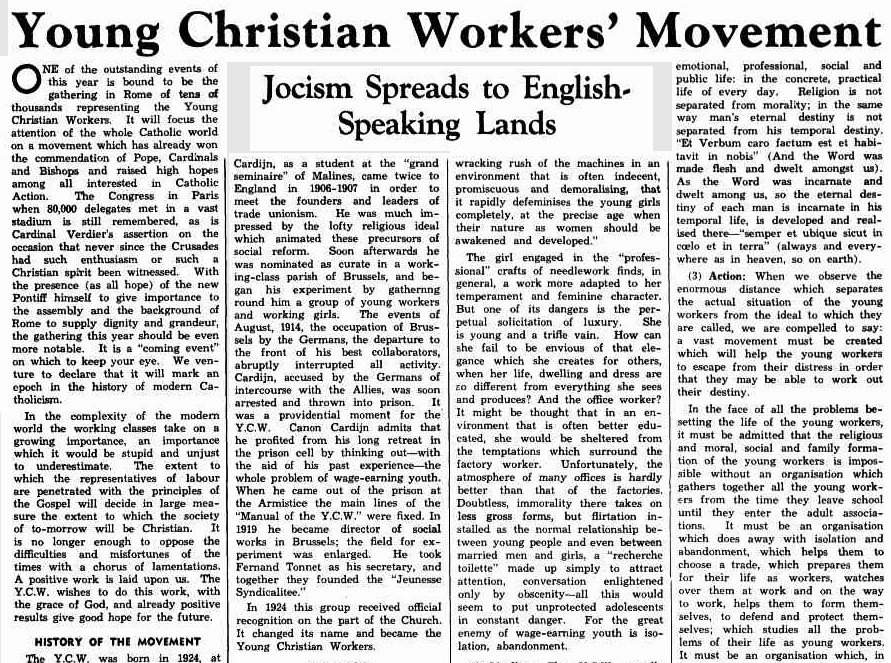 ONE of the outstanding events of this year is bound to be the gathering in Rome of tens of thousands representing the Young Christian Workers. It will focus the attention of the whole Catholic world on a movement which has already won the commendation of Pope, Cardinals and Bishops and raised high hopes among all interested in Catholic Action. The Congress in Paris when 80,000 delegates met in a vast stadium is still remembered, as is Cardinal Verdier’s assertion on the occasion that never since the Crusades had such enthusiasm or such a Christian spirit been witnessed. With the presence (as all hope) of the new Pontiff himself to give importance to the assembly and the background of Rome to supply dignity and grandeur, the gathering this year should be even more notable. It is a “coming event” on which to keep your eye. We venture to declare that it will mark an. epoch in the history of modern Catholicism.

In the complexity of the modern world the working classes take on a growing importance, an importance which it would be stupid and unjust to underestimate. The extent to which the representatives of labour are penetrated with the principles of the Gospel will decide in large measure the extent to which the society of to-morrow will be Christian. It is no longer enough to oppose the difficulties and misfortunes of the times with a chorus of lamentations. A positive work is laid upon us. The Y.C.W. wishes to do this work, with the grace of God, and already positive results give good hope for the future.

HISTORY OF THE MOVEMENT

The Y.C.W. was born in 1924, at least officially. It was then that it received its mandate as Catholic Action from the Belgium Episcopate. But it is necessary to go further back in order to describe its origins.

Among the remote causes which brought the Y.C.W. into existence, we must note on the one hand the great misery of the working class during the nineteenth century and the beginning of the twentieth; and on the other hand, the ardent desire of leaders in the Church to reconquer the masses, to re-Christianise the world of work. The Y.C.W. recalls with pride the names of Ozanam, Harmel, von Ketteler, Ducpetiaux, Mgr. Pottier, and many others. Of their lineage comes Canon Cardijn, the founder of the Y.C.W., who had felt the misery, the moral and spiritual wretchedness of workingclass youth. He has often related how he himself, the son of a working class family, obtained permission from his father, to carry on his studies, to enter the “petit seminaire” in order to learn Latin and to be able, one day, to be a priest. When he came back to his home at Hal his old classmates, now become young workers, would have nothing to do with him. A barrier had grown between the future priest and the workers. The Church and the working class occupied opposing camps; he who passed from one to the other was considered a traitor. The young Cardijn experienced a profound sadness. That he should be considered a “traitor” to the working class! He resolves to devote his life to overcoming this barrier; as a priest he would serve and .save the working class. Some years later, at the deathbed of his father, he consecrated by a solemn vow this irresistible determination to work for the integral upraising of his brother workers. It should be noted that the Abbe

Cardijn, as a student at the “grand seminaire” of Malines, came twice to England in 1906-1907 in order to meet the founders and leaders of trade unionism. He was much impressed by the lofty religious ideal which animated these precursors of social reform. Soon afterwards he was nominated as curate in a working-class parish of Brussels, and began his experiment by gathernng round him a group of young workers and working girls. The events of August, 1914, the occupation of Brussels by the Germans, the departure to the front of his best collaborators, abruptly interrupted all activity. Cardijn, accused by the Germans of intercourse with the Allies, was soon arrested and thrown into prison. It was a providential moment for the” Y.C.W. Canon Cardijn admits that he profited from his long retreat in the prison cell by thinking out—with the aid of his past experience—the whole problem of wage-earning youth. When he came out of the prison at the Armistice the main lines of the “Manual of the Y.C.W.” were fixed. In 1919 he became director of social works in Brussels; the field for experiment was enlarged. He took Fernand Tonnet as his secretary, and together they founded the “Jeunesse Syndicalitee.”

In 1924 this group received official recognition on the part of the Church. It changed its name and became the Young Christian Workers.

(1) Realism: The Y.C.W. is thoroughly imbued with realism. The first work that every Y.C.W. must do consists in making enquiries in order to know, the exact situation of the young workers.. In small meetings, grouping four or five young workers, the most elementary questions are answered. At what hour do you get up? At what hour does your work begin? How do you get to your factory? Whom do you meet on the way? What do you talk about? What is your particular work? Have you any companions at work? What is their attitude? What are the hygienic and moral conditions? What are your wages? Where do you take your meals? How do you spend your evenings? Do you go to Mass on Sundays? What do you think of during the service? etc., etc. In this way an attempt is made to draw up a complete picture of the worker’s life. The immense distress of thousands of these young workers soon becomes clear.

As an example, consider this from the manual of the J.O.C.F.: “At the present time in our country there are 150,000, perhaps 200,000, working girls. Each year thousands of them, children of fourteen years of age, pass without any period of transition from the school to the factory, the workshop or the office. Even a few enquiries are sufficient to verify the fact of the lamentable consequences of all this; the moral abandonment, promiscuity, depraved conditions in which these girls are compelled to work in order to earn their living. And there is no danger of exaggeration; their situation is incredible. The girls in the factories— and these form the majority, 87,000 from 14 to 21 years of age—perform work that is so mechanical and brutalising amidst the noise and nerve-wracking rush of the machines in an environment that is often indecent, promiscuous and demoralising, that it rapidly defeminises the young girls completely, at the precise age when their nature as women should be awakened and developed.”

The girl engaged in the “professional” crafts of needlework finds, in general, a work more adapted to her temperament and feminine character. But one of its dangers is the perpetual solicitation of luxury. She is young and a trifle vain. How can she fail to be envious of that elegance which she creates for others, when her life, dwelling and dress are so different from everything she sees and produces? And the office worker? It might be thought that in an environment that is often better educated, she would be sheltered from the temptations which surround the factory worker. Unfortunately, the atmosphere of many offices is hardly better than that of the factories. Doubtless, immorality there takes on less gross forms, but flirtation installed as the normal relationship between young people and even between married men and girls, a “recherche toilette” made up simply to attract attention, conversation enlightened only by obscenity—all this would seem to put unprotected adolescents in constant danger. For the great enemy of wage-earning youth is isolation, abandonment.

(2) Idealism: The Y.C.W. equally professes a thorough idealism. All the young workers are called to a divine destiny. “From all eternity, God, by an infinite gift of His love, has predestined each young worker in particular, and all of them in general, to participate in His nature, His life, His love, His divine happiness. He has decided to give Himself, to communicate Himself to them, to enable them to live His life, to enlighten them with His truth, to enable them to take part in His reign. The young workers are not machines, animals or slaves. They are the sons, the heirs, the collaborator’s of God. ‘Dedit eis potestatem filios Dei fieri . . . divinse consortes naturae’ (He gave them power to become sons of God . . . partakers in His Divine Nature). It is their unique, their only, their true destiny, the point of their existence and their work, the origin of all their rights and duties.”

This destiny is not twofold; on the one hand eternal and on the other temporal, without a bond between them or mutual influence. There is not an eternal destiny by the side of, remote from earthly life, without relation to it. There is no disincarnate destiny, any more than there is a disincarnate religion. It is an eternal destiny incarnate in time, begun in time, realising and developing itself in time, working towards its fulfilment in time, in this earthly life, in the whole of it, in all its aspects and applications and realisations; in bodily, intellectual, moral, emotional, professional, social and public life: in the concrete, practical life of every day. Religion is not separated from morality; in the same way man’s eternal destiny is not separated from his temporal destiny. “Et Verbum caro factum est et habitavit in nobis” (And the Word was made flesh and dwelt amongst us). As the Word was incarnate and dwelt among us, so the eternal destiny of each man is incarnate in his temporal life, is developed and realised there—”semper et ubique sicut in coelo et in terra” (always and everywhere as in heaven, so on earth).

(3) Action: When we observe the enormous distance which separates the actual situation of the young workers from the ideal to which they are called, we are compelled to say: a vast movement must be created which will help the young workers to escape from their distress in order that they may be able to work out their destiny.