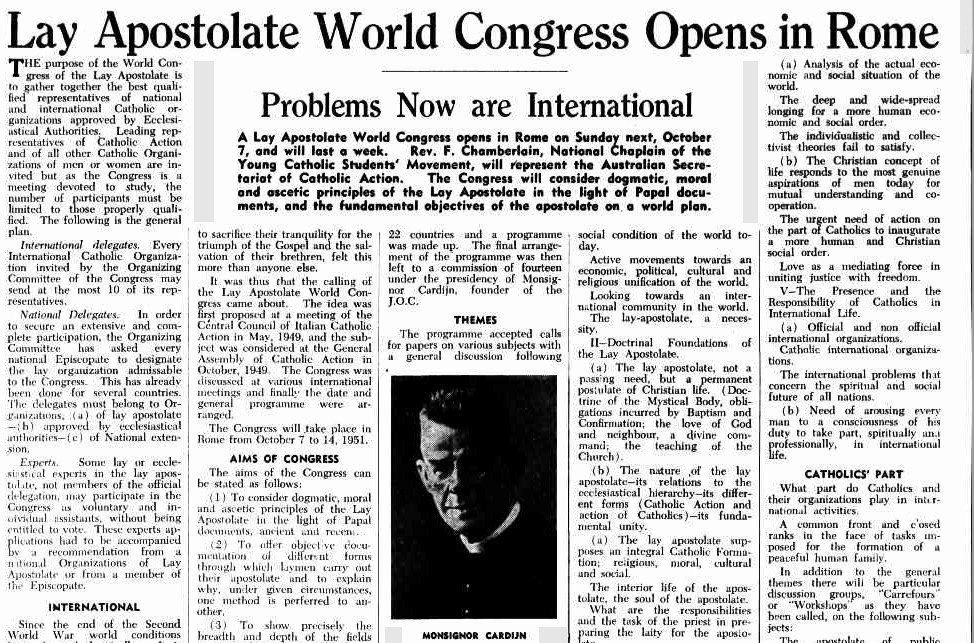 A Lay Apostolate World Congress opens in Rome on Sunday next, October 7, and will last a week.

Rev. F. Chamberlain, National Chaplain of the Young Catholic Students’ Movement, will Represent the Australian Secretariat of Catholic Action. The Congress will consider dogmatic, moral and ascetic principles of the Lay Apostolate in the light of Papal documents, and the fundamental objectives of the apostolate on. a world plan.

THE purpose of the World Congress of the Lay Apostolate is to gather together the best qualified representatives of national and international Catholic organizations approved by Ecclesiastical Authorities.

Leading representatives of Catholic Action and of all other Catholic Organizations of men or women are invited but as the Congress is a meeting devoted to study, the number of participants must be limited to those properly qualified.

The following is the general plan.

International delegates. Every International Catholic Organization invited by the Organizing Committee of the Congress may send at the most 10 of its representatives.

National Delegates. In order to secure an extensive and complete participation, the Organizing Committee has asked every national Episcopate to designate the lay organization admissable to the Congress. This has already been done for several countries. The delegates must belong to Organizations;

(a) of lay apostolate

(b) approved by ecclesiastical authorities

Experts. Some lay or ecclesinstical experts in the lay apostolate, not members of the official delegation, may participate in the Congress as voluntary and individual assistants, without being entitled to vote. These experts applications had to be accompanied by a recommendation from a national Organizations of Lay Apostolate or from a member of the Episcopate.

Since the end of the Second World War world conditions have changed drastically. It is a fact of History that problems of today must be viewed on an international plane. Associations, organizations and movements, most certainly the Apostolate, must recognize the situation.

In a message to the J.O.C. Congress in Canada in 1947 the Holy Father pointed out that the Apostolate must be considered from an international angle.

“We are aware that today problems often assume not only national but world-wide proportions. Barriers tend to’ disappear, thank God, between countries and even continents, and the unity of the human race is stressed ever more and more. The progress of science also continues to favour the intermingling of peoples.”

This goes to show that questions relating to the Apostolate must be considered from the international angle. An International Lay Apostolate Congress came under consideration before the beginning of the jubilee year.

The months of preparation immediately before the beginning of the Holy Year made it particularly clear that today’s problems must be considered from the international viewpoint.

At that time, when all eyes were turned toward St. Peter’s in Rome, it was realized more clearly than ever before that there is a necessity for closing ranks. During the Holy Year itself the immense multitudes that gathered in the Holy City from all parts of the world proclaimed incessantly that the Church is universal, that she is one, that Catholicism is no empty word.

Militant Catholics, those that have listened to the summons of their hierarchy to devote their time and efforts and to sacrifice their tranquility for the triumph, of the Gospel and the salvation of their brethren, felt this more than anyone else.

It was thus that the calling of the Lay Apostolate World Congress came about. The idea was first proposed at a meeting of the Central Council of Italian Catholic Action in May, 1949, and the subject was considered at the General Assembly of Catholic Action in October, 1949.

The Congress was discussed at various international meetings and finally the date and general programme were arranged. The Congress will .take place in Rome from October 7 to 14, 1951.

The aims of the Congress can be stated as follows:

(1) To consider dogmatic, moral and ascetic principles of the Lay Apostolate in the light of Papal documents, ancient and recent.

(2) To offer objective documentation of different forms through which laymen carry out their apostolate and to explain why, under given circumstances, one method is preferred to another.

(3) To show precisely the breadth and depth of the fields in which laymen are called upon to carry out their apostolate.

(4) To view the fundamental objectives of the apostolate which can, today, be carried out on a world plan.

The aims of the Congress were studied at a conference of eighty leaders of national and international organizations representing 22 countries and a programme was made up. The final arrangement of the programme was then left to a commission of fourteen under the presidency of Monsignor Cardijn, founder of the J.O.C.

The programme accepted calls for papers on various subjects with a general discussion following each paper, The following is a list of the themes to be considered:

I—The World of Today and the Lay Apostolate. The population of the world with reference to the Catholic Church. The religio-moral, cultural and

II—Doctrinal Foundations of the Lay Apostolate.

(a) The lay apostolate, not a passing need, but a permanent postulate of Christian life. (Doctrine of the Mystical Body, obligations incurred by Baptism and Confirmation; the love of God and neighbour, a divine command; the teaching of the Church).

(b) The nature ,of the lay apostolate—its relations to the ecclesiastical hierarchy—its different forms (Catholic Action and action of Catholics)—its fundamental unity. (a) The lay apostolate supposes an integral Catholic Formation; religious, moral, cultural and social.

(b) The Christian concept of life responds to the most genuine aspirations of men today for mutual understanding and cooperation. The urgent need of action on the part of Catholics to inaugurate a more human and Christian social order. Love as a mediating force in uniting justice with freedom.

What part do Catholics and their organizations play in international activities. A common front and closed ranks in the face of tasks imposed for the formation of a peaceful human family. In addition to the general themes there will be particular discussion groups, “Carrefours” or “Workshops” as they have been called, on the following subjects:

The apostolate among intellectual people;

The apostolate in the field of assistance and charity;

The catechetic apostolate conducted by the laity;

The apostolate among families;

The apostolate among children;

The apostolate among the young people, rural, worker, students;

The apostolate in the working and professional world;

The apostolate in the field of sport and games;

The apostolate in the civic field;

The apostolate in mission countries;

The apostolate in the countries without religious freedom;

The apostolate according to the U.N.E.S.C.O. and O.M.S. programmes;

The apostolate with reference to migratory problems;

The apostolate of women.

Other discussion groups may be added.