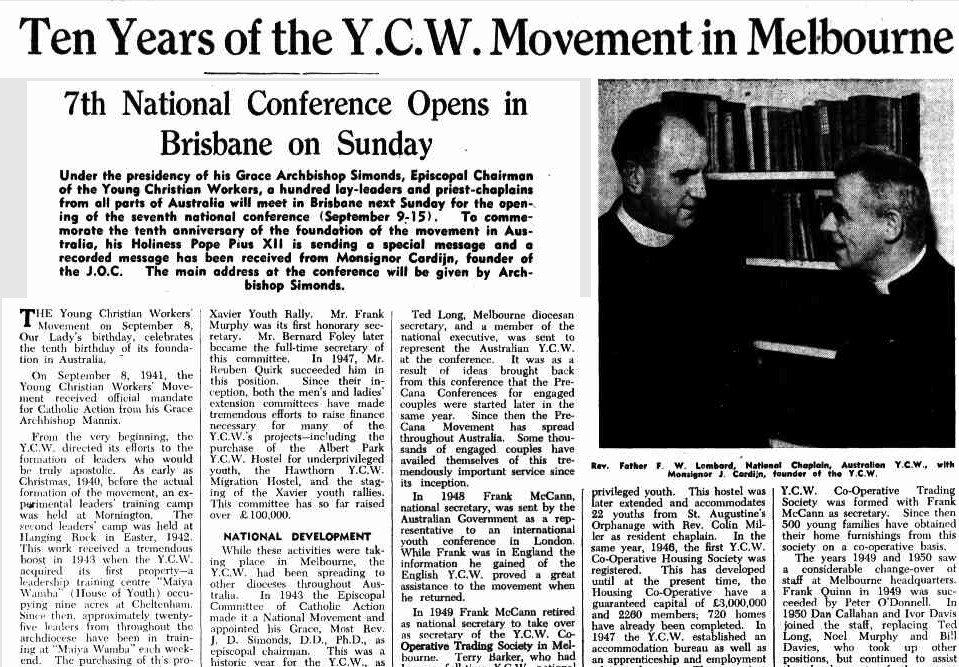 7th National Conference Opens in Brisbane on Sunday Under the presidency of his Grace Archbishop Simonds, Episcopal Chairman of the Young Christian Workers, a hundred lay-leaders and priest-chaplains from all parts of Australia will meet in Brisbane next Sunday for the opening of the seventh national conference (September 9-15).

To commemorate the tenth anniversary of the foundation of the movement in Australia, his Holiness Pope Pius XII is sending a special message and a recorded message has been received from Monsignor Cardijn, founder of the J.O.C. The main address at the conference will be given by Archbishop Simonds.

From the very beginning, the Y.C.W. directed its efforts to the formation of leaders who would be truly apostolic. As early as Christmas, 1940, before the actual formation of the movement, an experimental leaders’ training camp was held at Mornington. The second leaders’ camp was held at Hanging Rock in Easter, 1942.

This work received a tremendous boost in 1943 when the Y.C.W. acquired its first property—a leadership training centre “Maiya Wamba” (House of Youth) occupying nine acres at Cheltenham. Since then, approximately twenty-five leaders from throughout the archdiocese have been in training at “Maiya Wamba” each week-end.

The purchasing of this property during the war and at a time when the Y.C.W. was having a battle to build up a stable organization was a sign of courageous confidence in the future of the movement.

The raising of the necessary finance for this venture was largely due to the efforts of the Melbourne Y.C.W. Men’s Extension Committee. This committee had originally been formed in 1942 to assist in the organization of the Xavier Youth Rally.

Mr. Frank Murphy was its first honorary secretary. Mr. Bernard Foley later became the full-time secretary of this committee. In 1947, Mr. Reuben Quirk succeeded him in this position.

Since their inception, both the men’s and ladies’ extension committees have made tremendous efforts to raise finance necessary for many of the Y.C.W.’s projects—including the purchase of the Albert Park Y.C.W. Hostel for underprivileged youth, the Hawthorn Y.C.W. Migration Hostel, and the staging of the Xavier youth rallies. This committee has so far raised over £100,000.

While these activities were taking place in Melbourne, the Y.C.W. had been spreading to other dioceses throughout Australia. In 1943 the Episcopal Committee of Catholic Action made it a National Movement and appointed his Grace, Most Rev. J. D. Simonds, D.D., Ph.D., as episcopal chairman.This was a historic year for the Y.C.W., as in addition to the

development previously mentioned, it was the occasion of the first national meeting of the Y.C.W. chaplains. On this occasion 110 priests from all over Australia were in conference for two days at the Convent of the Good Shepherd, Abbotsford. Largely due to the inspiration of his Grace, Dr. Simonds, this meeting was a huge success.

In 1943 the Y.C.W. in Australia appointed its first full-time worker; Frank McCann, now secretary-manager of the Y.C.W. Co-operative Trading Society, was appointed as national secretary by the episcopal chairman. The following year a preliminary national conference of chaplains and leaders was held at “Maiya Wamba.”

The first full-scale national conference was held at Brisbane in 1945. One hundred leaders and sixty chaplains from all over Australia were present, and his Grace Dr. Simonds presided. Subsequent national conferences have been held in Newcastle, Adelaide, Melbourne and Perth. In June, 1947, a great Y.C.W. international conference, was held in Montreal, Canada, to mark the fifteenth birthday of the Y.C.W. in that country, 42 countries were represented.

Ted Long, Melbourne diocesan secretary, and a member of the national executive, was seint to represent the Australian Y.C.W. at the conference.

It was as a result of ideas brought back from this conference that the Pre-Cana Conferences for engaged couples were started later in the same year. Since then the Pre-Cana Movement has spread throughout Australia. Some thousands of engaged couples have availed themselves of this tremendously important service since its inception.

In 1948 Frank McCann, national secretary, was sent by the Australian Government as a representative to an international youth conference in London. While Frank was in England the information he gained of the English Y.C.W. proved a great assistance to the movement when he returned.

In 1949 Frank McCann retired as national secretary to take over as secretary of the Y.C.W. Cooperative Trading Society in Melbourne. Terry Barker, who had been a full-time Y.C.W. national field-officer since 1947, was appointed national secretary in May, 1949.

In 1950 Terry Barker attended an international Y.C.W. conference in Brussels to mark the’ silver jubilee of the Y.C.W. The same year, the national chaplain, Rev. Father Lombard, returned to Australia after having studied youth and migration problems in the countries overseas at the request of the Australian Government.

Right from the beginning of the national movement in 1943, the Y.C.W. realized the need for publishing a newspaper which would be the voice of the movement in bringing Christian values to the young worker and the public in general. New Youth, a monthly paper, was first published in 1943. The appointment of Ken Treacey as full-time editor of New Youth in 1948 was immediately reflected in the standard of the paper.

The Y.C.W. is immensely grateful for the assistance and advice given New Youth at the time by the late Alan Powell, a prominent journalist on a leading Melbourne daily. David Burke succeeded Ken Treacey in February, 1949, until .February, 1951, and further improved the quality and standing of the paper.

In 1946, the Y.C.W, acquired a hostel at Albert Park for under privileged youth. This hostel was later extended and accommodates 22 youths from St. Augustine’s Orphanage with Rev. Colin Miller as resident chaplain. In the same year, 1946, the first Y.C.W. Co-Operative Housing Society was registered. This has developed until at the present time, the Housing Co-Operative have a guaranteed capital of £3,000,000 and 2260 members; 720 homes have already been completed. In 1947 the Y.C.W. established an accommodation bureau as well as an apprenticeship and employment advisory bureau. These services did much to meet some of the major current problems of youth in Melbourne.

The Y.C.W. Migration Hostel at Hawthorn for young worker migrants from the British Isles was first purchased in 1948. The first batch of 34 migrants arrived in 1950. Regular batches of young workers from overseas have been arriving since that time. Rev. J. A. Carroll is resident chaplain at the migration hostel Another important development was the. purchase of a 25-acre property at Phillip Island in 1949 as a permanent camp-site for young workers.

Also in 1949 the Y.C.W. Co-Operative Trading Society was formed with Frank McCann as secretary. Since then 500 young families have obtained their home furnishings from this society on a co-operative basis.

The years 1949 and 1950 saw a considerable change-over of staff at Melbourne headquarters. Frank Quinn in 1949 was succeeded by Peter O’Donnell. In 1950 Dan Callahan and Ivor Davis joined the staff, replacing Ted Long, Noel Murphy and Bill Davies, who took up other positions, but continued to assist the development of the movement. Ted Long who joined the staff of the housing co-operatives, has recently returned to the Melbourne staff. Peter O’Donnell, who joined the Redemptorist Order, and Ivor Davis later left the staff in 1950.