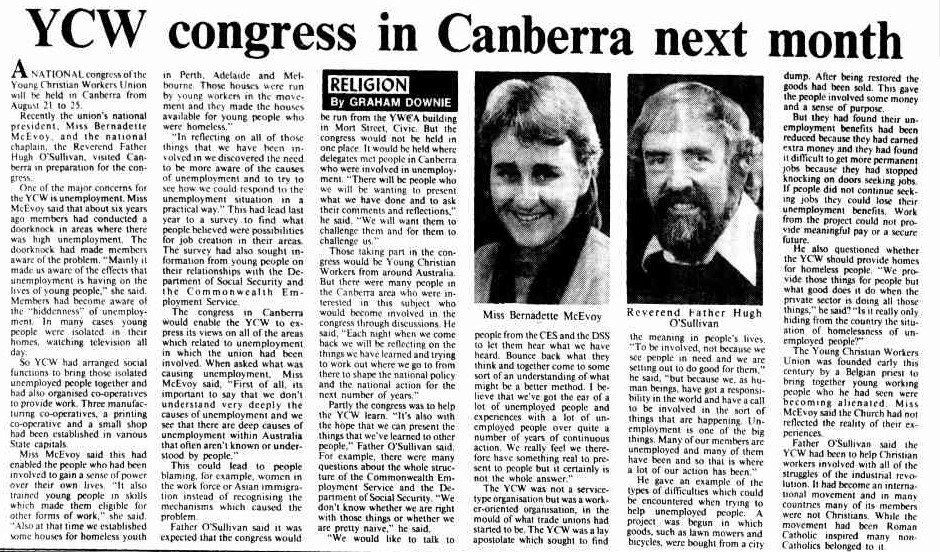 A NATIONAL congress of the Young Christian Workers Union will be held in Canberra from August 21 to 25.

One of the major concerns for the YCW is unemployment. Miss McEvoy said that about six years ago members had conducted a doorknock in areas where there was high unemployment. The doorknock had made members aware of the problem.

So YCW had arranged social functions to bring those isolated unemployed people together and had also organised co-operatives to provide work. Three manufacturing co-operatives, a printing co-operative and a small shop had been established in various State capitals.

Miss McEvoy said this had enabled the people who had been involved to gain a sense of power over their own lives. “It also trained young people in skills which made them eligible for other forms of work,” she said. “Also at that time we established some houses for homeless youth in Perth, Adelaide and Melbourne. Those houses were run by young workers in the movement and they made the houses available for young people who were homeless.”

“In reflecting on all of those things that wc have been involved in we discovered the need to be more aware of the causes of unemployment and to try to see how wc could respond to the unemployment situation in a practical way.” This had lead last year to a survey to find what people believed were possibilities for job creation in their areas. The survey had also sought information from young people on their relationships with the Department of Social Security and the Commonwealth Employment Service.

The congress in Canberra would enable the YCW to express its views on all of the areas which related to unemployment in which the union had been involved. When asked what was causing unemployment, Miss McEvoy said, “First of all, its important to say that we don’t understand very deeply the causes of unemployment and we see that there are deep causes of unemployment within Australia that often aren’t known or understood by people.”

This could lead to people blaming, for example, women in the work force or Asian immigration instead of recognising the mechanisms which caused the problem.

Father O’Sullivan said it was expected that the congress would be run from the YWCA building in Mort Street, Civic. But the congress would not be held in one place. It would be held where delegates met people in Canberra who were involved in unemployment. “There will be people who we will be wanting to present what we have done and to ask their comments and reflections,” he said. “We will want them to challenge them and for them to challenge us.”

Those taking part in the congress would be Young Christian Workers from around Australia. But there were many people in the Canberra area who were interested in this subject who would become involved in the congress through discussions. He said, “Each night when we come back we will be reflecting on the things we have learned and trying to work out where we go to from there to shape the national policy and the national action for the next number of years.”

Partly the congress was to help the YCW learn. “It’s also with the hope that we can present the things that we’ve learned to other people,” Father O’Sullivan said. For example, there were many questions about the whole structure of the Commonwealth Employment Service and the Department of Social Security. “We don’t know whether we are right with those things or whether we are pretty naive,” he said.

“We would like to talk to people from the CES and the DSS to let them hear what we have heard. Bounce back what they think and together come to some sort of an understanding of what might be a better method. I believe that we’ve got the ear of a lot of unemployed people and experiences with a lot of unemployed people over quite a number of years of continuous action. We really feel we therefore have something real to present to people but it certainly is not the whole answer.”

The YCW was not a service type organisation but was a worker-oriented organisation, in the mould of what trade unions had started to be. The YCW was a lay apostolate which sought to find the meaning in people’s lives. “To be involved, not because we see people in need and we are setting out to do good for them,” he said, “but because we, as human beings, have got a responsibility in the world and have a call to be involved in the sort of things that are happening. Unemployment is one of the big things. Many of our members are unemployed and many of them have been and so that is where a lot of our action has been.”

He gave an example of the types of difficulties which could be encountered when trying to help unemployed people. A project was begun in which goods, such as lawn mowers and bicycles, were bought from a city dump. After being restored the goods had been sold. This gave the people involved some money and a sense of purpose.

He also questioned whether the YCW should provide homes for homeless people. “We provide those things for people but what good does it do when the, private sector is doing all those things,” he said? “Is it really only hiding from the country the situation of homelessness of unemployed people?”

The Young Christian Workers Union was founded early this century by a Belgian priest to bring together young working people who he had seen were becoming alienated. Miss McEvoy said the Church had not reflected the reality of their experiences.

Father O’Sullivan said the YCW had been to help Christian workers involved with all of the struggles of the industrial revolution. It had become an international movement and in many countries many of its members were not Christians. While the movement had been Roman Catholic inspired many non-Catholics belonged to it.