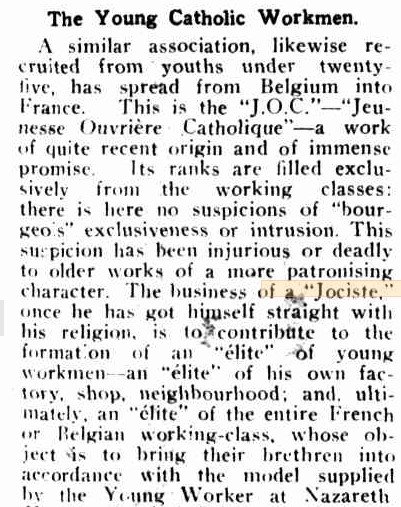 Organisation for Help and Self-Help

A similar association, likewise recruited from youths under twenty-five, has spread from Belgium into France. This is the “J.O.C.”—“Jeunesse Ouvriere Catholique”—a work of quite recent origin and of immense promise. Its ranks are filled exclusively from the working classes: there is here no suspicion of “bourgeois” exclusiveness or intrusion. This suspicion has been injurious or deadly to older works of a more patronising character. The business of a ‘‘Jociste” once he has got himself straight with his religion, is to contribute to the formation of an “elite” of young workmen an “elite’’ of his own factory, shop, neighbourhood; and. ultimately, an “elite” of the entire French or Belgian working-class, whose object to bring their brethren into accordance with the model supplied by the Young Worker at Nazareth.

How sadly dechristianisation of that class went on since the middle of last century, and from various causes, there is, unhappily, no need to tell. Soviet Russia is the most eloquent, but not the only, evidence of the menace to religion and civilisation that has thus arisen. How is the evil to be countered and undone? Even were there far more numerous factory owners, mine owners and (so-called) “captains of industry” of the admirable type of the Harmels and the Feron-Vraus,  the work could not be left to them. The youths of the J.O..C. are apostles of Christianity among workmen— apostles who begin and end as workmen themselves. Their means of action are already of the most varied type. None surpasses in its efficacy the retreat—above all. the enclosed retreat—with its day or so, if no more, of silence, recollection and spiritual “taking stock.” In many places the enclosed retreats have nourished exceedingly. During the year there are hours of recollection in common on holidays: there are other organised exercises of piety compatible with working days and hours: there are study-circles for the gaining of a knowledge, both solid and controversial, of Catholic social ideals and theories: there are bureaus of counsel or help for the boy or youth entering on active life, whereby he is enlightened as to choice of a situation, chances of a job, dangers of certain new surroundings, initial difficulties, risks of one kind or another; there are night-schools,. Sunday clubs, occasional organised excursions, the advantages of a trade union in time of strike or other crisis; there are funds for the training of orphan or destitute children—a purpose to which millions of franks have already voted.